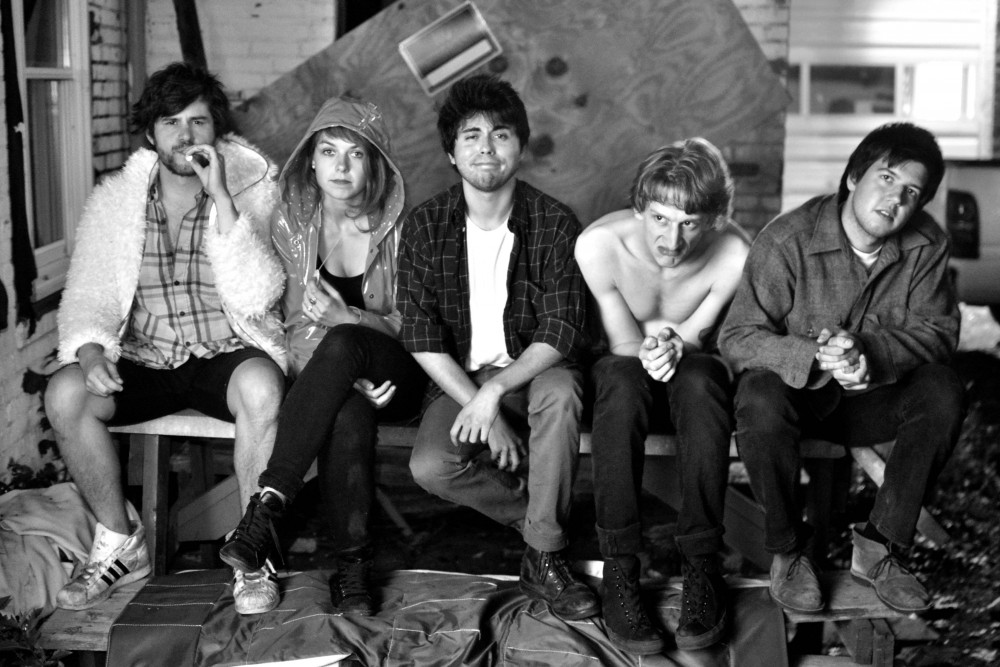 A little bit of background: They have been called deranged, freaks, weirdos – whatever. Guerilla Toss is an art rock group that formed in 2012 and in those two short years, GToss has become a name that’s been on everyone’s lips. They have been frequenting sweaty Boston basements, tour relentlessly and have earned a cult-like following because of it. Kassie Carlson pushes the limits of her own vocal chords with her signature blend of shrill yelps, screeches, and rapid-fire syllables in a language she sometimes makes up on the spot. The rest of the band encapsulates Carlson with layer after layer of pounding percussion, barbed guitar riffs and cruddy synth, all centered on…well it’s hard to nail down what.

I was met with gasps, wide eyes, and giddy smiles when I revealed that it was my first time seeing them at this year’s BUFU Fest. Guerilla Toss fans undoubtedly go every damn chance they get. “This is your first GToss show? You’re gonna love it, I just, there aren’t words. Have fun,” I was told. What I then experienced far surpassed anything I had heard on tape. GToss is a band that you have to see live. It’s messy, dirty, and mildly exhausting. At GToss shows you’re guaranteed an audience that moves/twists/flails/thrashes as a unit (not to mention, a lot of sweat).

Why you should care: There’s a method to the madness.

Press play: This video of “Drip Decay” from Guerilla Toss’ “Gay Disco” album release show from January is about as close as you can get to a GToss show without your eyes gettin’ wet. It also happens to be an incredibly dope video.

Like what you hear? Hit up Great Scott on Friday night with an open mind (but more importantly, earplugs). 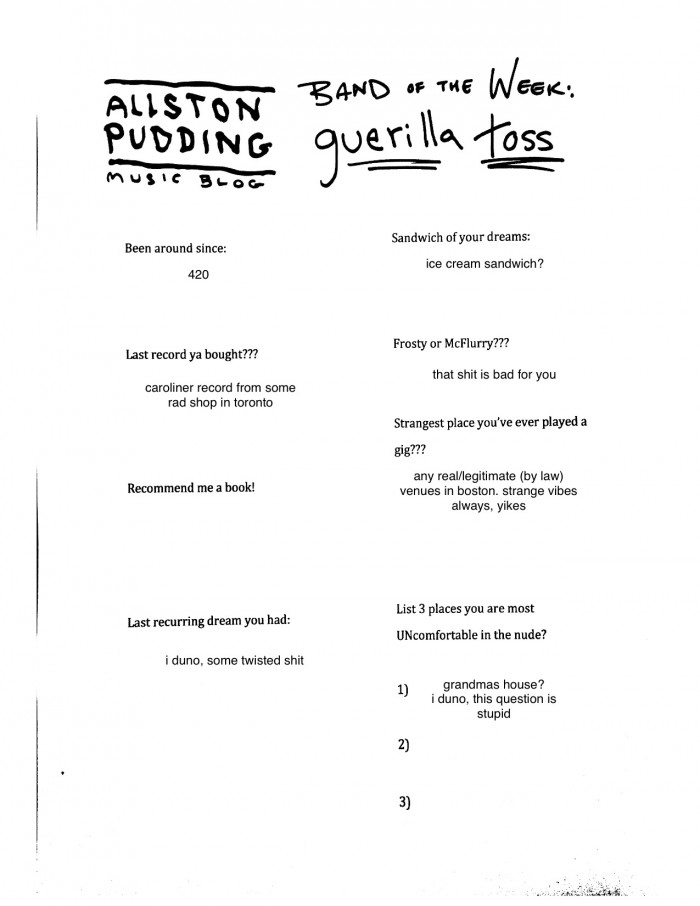 Perry Eaton writes for Boston.com. Perry Eaton talks on the radio with me from time to time. Today, he talked to me about what he’s been listening to and some upcoming shows and festivals worth checking out. Click here to read more. END_OF_DOCUMENT_TOKEN_TO_BE_REPLACED

In some ways, Palehound has always had a home in Boston. END_OF_DOCUMENT_TOKEN_TO_BE_REPLACED

Kal Marks is the kind of band that sneaks up on you. Whether you’re experiencing them at some basement show in Allston, or in an opening set for Pile at Great Scott, you may not see them coming, but they’ll immediately click. The combination of heavy sludgy riffs and lead singer Carl Shane’s unique crooning bowls you over. It’s dark and it’s compelling, but most importantly, it’s really earnest. END_OF_DOCUMENT_TOKEN_TO_BE_REPLACED

It’s not very often that some of the most talented performers in Boston are set to grace the same stage in a single night. This Sunday marks the 1 year anniversary of Mind Spray, a local hip-hop open mic and showcase series devised by promotion and booking company The Brain Trust. END_OF_DOCUMENT_TOKEN_TO_BE_REPLACED

There’s been a lot written about Street Dogs evicting a group of neo-Nazis from the pit at their House of Blues, Anaheim show on St. Patrick’s Day. You don’t need to read any of it. Just listen to front man Mike McColgan tell the story. He talks about joining his old band, Dropkick Murphys, on stage in Boston last week, too. END_OF_DOCUMENT_TOKEN_TO_BE_REPLACED

It’s not her best. END_OF_DOCUMENT_TOKEN_TO_BE_REPLACED

When in Nashville, do as the locals do. Since relocating to Tennessee a few months ago, this seems to have been Steven Tyler of Aerosmith’s approach after announcing in an October Twitter Q&A session that he intended to record a country album, an endeavor he’s well in the process of completing. END_OF_DOCUMENT_TOKEN_TO_BE_REPLACED

“I’m Shipping Up To Boston” just turned ten years old. Boston.com’s Matt Juul put this piece together on the history and significance of the Dropkick Murphys song, then joined me in studio to talk about it. END_OF_DOCUMENT_TOKEN_TO_BE_REPLACED

Boston is a city known for it’s Irish heritage, and it’s celebration of it. Two main traditions have held strong in Boston: the St. Patrick’s Day Breakfast and subsequent Parade. But I argue there is a third now: seeing the Dropkick Murphys at the House of Blues during their multi-night March Residency. END_OF_DOCUMENT_TOKEN_TO_BE_REPLACED

Sure, you might see a punk show on Monday and a chillwave band on Thursday and so on, but usually you favor one sound over another because you’re a busy bee and time is honey. It’s been the same for years, and the Prefab Messiahs can vouch. END_OF_DOCUMENT_TOKEN_TO_BE_REPLACED