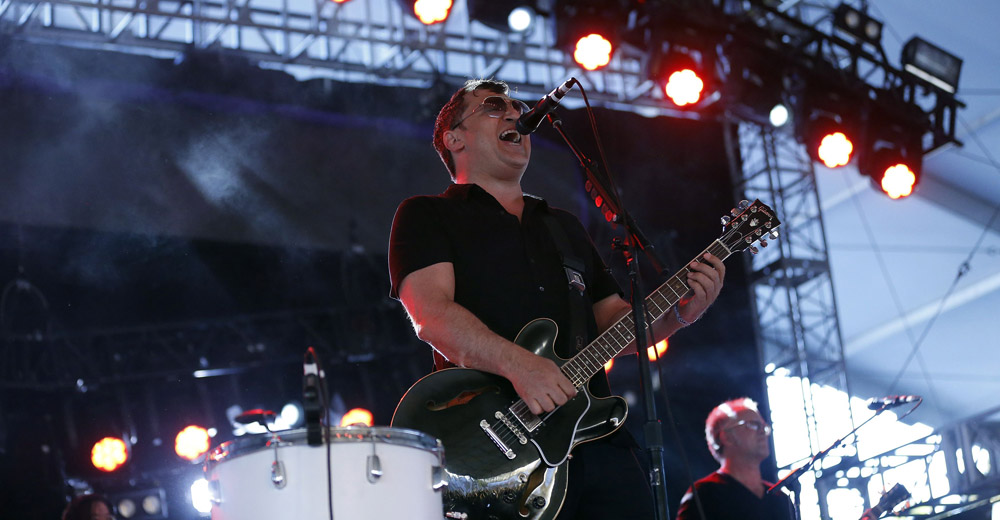 With Record Store Day on the horizon for this weekend, it’s easy to get caught up in more limited edition stuff that will be hitting the racks. Don’t get too far ahead of yourself though, there’s plenty to get excited for before that one day of the year where vinyl gets swept off the shelves.

Afghan Whigs – “Do to the Beast”

With their first album in 16 years, Cincinnati alt-rock legends Afghan Whigs  do a solid job of avoiding the dad rock pigeonhole, which in itself is a victory. That’s not the album’s only accomplishment though. Four guitarists send a solid message that if guitar music isn’t now what it once was, then they’re going to give you a big taste of yesteryear. And that’s what they do. “Do to the Beast” is an arena rock grinder that flashes all of its guns. The album has a Muse-like mentality– dark and menacing, but having some pop charm sprinkled into the mix. Like Muse, however, Afghan Whigs’ approach on this album grows a bit stale after a while. It’s tone begins to plateau a bit as songs begin to drag out. Luckily, that tone doesn’t do much to age them.

Brooklyn art punk duo Japanther has always threaded between scenes and kept a firm dedication to DIY touring and recording. This doesn’t always equate to a recipe for success, but luckily the band is good enough and works hard enough to get its proper dose of it. With “Instant Money Magic,” the band wriggles itself into the trend of two-minutes-or-less tracks, but finds ways to distinguish itself from other acts like Solids and Tony Molina. That’s where the “art” in art punk comes along. With only two members, Japanther’s mid-tempo guitar-drooling romps are brightened by vibrant organs, group vocals, and some off-beat percussion. It gives the band a different vibe from many of its contemporaries.

WOODS – “With Light and With Love”

WOODS have a solid habit of delicately playing into what is hip while completely rejecting what is hip on every record. The band’s west coast ease makes them seem too carefree to buy into any Bon Iver branded angst or any Dawes claimed 70’s songwriter groove, but the band touches all of those spheres whether it likes it or not. That said, you get just about what you expect of “With Light and With Love.” It’s delightfully sunny, drenched in Dylan-esque organ and a completely harmless vocal style. That could be all it needs to be the perfect summer porch-rocker. If you’re looking for more psychedelic depth, you may need to search elsewhere.

Cali freaks Thee Oh Sees had planned a hiatus late last year, but “Drop” shows signs that the band is a strong as ever. It marks the band’s fifth full length in four years, and reflects a more polished version of the Burger Records fuzz that the band greatly helped to popularize in the recent past. It’s not like the band scraped from the bottom of the barrel to put this album out. In fact, it’s likely their most palatable to date, with feel-good hooks on tracks like “Encrypted Bounce” that then open themselves up into whirlwind jams that stray from the meltingly overbearing. Let’s just hope we can squeeze another tour out of this band now too.

“The Both” will be a favorite of NPR listeners. Ted Leo and Aimee Mann team up for this supergroup, which combines aging hipster songwriting with curiously constructed rock forms. It’s the type of record that could give a life to those amidst a mid-life crisis– an option that offers up a PBR and flannel instead of a glass of red and a Norah Jones record. For real though, there’s some true vivacity to this album, found in delightful duet hooks and guitars that aren’t afraid to scream. The Both may attract some preconceptions, but in reality, their summer tour doesn’t have to stick to daytime sets a outdoor festivals if it doesn’t want to.

Enter to win tickets to see Trio Da Kali at The Villa Victoria Center of the Arts (Newton, MA) on April 10th. END_OF_DOCUMENT_TOKEN_TO_BE_REPLACED

END_OF_DOCUMENT_TOKEN_TO_BE_REPLACED

Enter to win tickets to Rhye at The Paradise on February 28th. END_OF_DOCUMENT_TOKEN_TO_BE_REPLACED

Her new album has been pushed back, but we have Kimbra’s new single for you. END_OF_DOCUMENT_TOKEN_TO_BE_REPLACED

The folk duo returns with a new record this week. END_OF_DOCUMENT_TOKEN_TO_BE_REPLACED

Now that we’re done looking back at 2017, let’s look ahead at 2018. END_OF_DOCUMENT_TOKEN_TO_BE_REPLACED

Our first Song of the Week for 2018. END_OF_DOCUMENT_TOKEN_TO_BE_REPLACED

In a year when so many things were off, the music was right on. END_OF_DOCUMENT_TOKEN_TO_BE_REPLACED