A lone hacker known as ROR[RG] uploaded fifteeen spreadsheets worth of passwords, birthdays, email addresses, and zip codes — along with the aforementioned sexual preferences and fetishes — of AdultFriendFinder users, allegedly because the site owed his friend money.

Though no credit card data is attached, the files have been viewed over 1700 times, and it is easy to identify some users through a quick Google search, according to Independent IT security consultant Bev Robb, who first reported the hack in a series of blog posts. 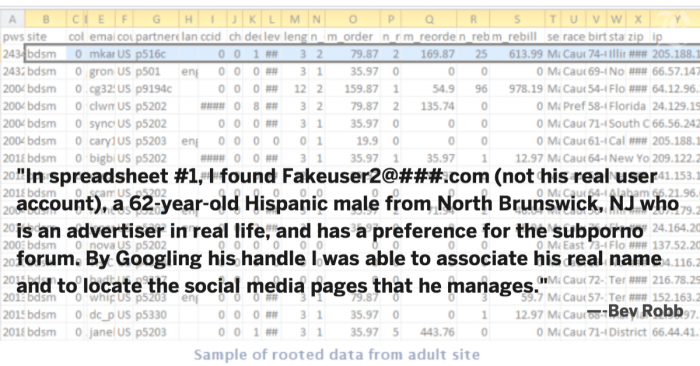 Infamous hacker Andrew “Weev” Auernheimer, who spent over three years in prison for exploiting an AT&T security flaw and leaking the data of 114,000 iPad users, claimed on Twitter that he would be using the hack to out certain individuals who used the site.

Thanks to @adultfriendfind‘s shit security, I now have a list of millions of people tagged by sexual preferences. Lulz will come of this.

While the current data does not have credit card information, ROR[RG] has offered the information to the highest bidder.

In the screenshot, ROR[RG] asks for 70 bitcoin (worth a little under $17,000) for the full AdultFriendFinder dataset with credit card information included. He also offers to do an identical hack on any company’s databases for 750 bitcoin (around $180,000).

It’s another unfortunate reminder that despite assurances, personal information can never be 100% safe. As Pew Research survey data shows, most Americans are already aware of this.

A vast majority of those surveyed had no confidence or very little confidence that records of their activity would remain secure, with the lowest confidence scores coming for online-only businesses — online advertisers, social media sites, video sites, and search engines.

HUBweek came to Boston, and we were there to take it all in. END_OF_DOCUMENT_TOKEN_TO_BE_REPLACED

END_OF_DOCUMENT_TOKEN_TO_BE_REPLACED

Earlier this month, we posted a story about Rob, a man falsely accused of being a sex offender. END_OF_DOCUMENT_TOKEN_TO_BE_REPLACED

We figured we’d do our part in beating this dead horse into the ground, so without further ado, here are some of your Boston favorites like you’ve never seen them before, and hopefully never see them again. END_OF_DOCUMENT_TOKEN_TO_BE_REPLACED

File this under cool cosmetic inventions coming out of Cambridge– two MIT Media Lab researchers are developing nail art decals that will double-time as touchpads to control your phone or laptop with a single swipe. END_OF_DOCUMENT_TOKEN_TO_BE_REPLACED

All Harry Potter fans wait for the Hogwarts acceptance letter that they will never receive and dream of the house they want to join. You can hope to be part of Gryffindor all you want, but the choice belongs to the Sorting Hat. Now, instead of traveling the long journey to magic school, Muggles everywhere can consult a Twitter bot that will decide for you.
END_OF_DOCUMENT_TOKEN_TO_BE_REPLACED

Wednesday was April Fools’ Day, making anyone who has genuinely bad news to deliver at an extreme disadvantage. Powering down for the night, I and some 44,000 other users received the following email from a free, cloud-based screenwriting service called Scripped: END_OF_DOCUMENT_TOKEN_TO_BE_REPLACED