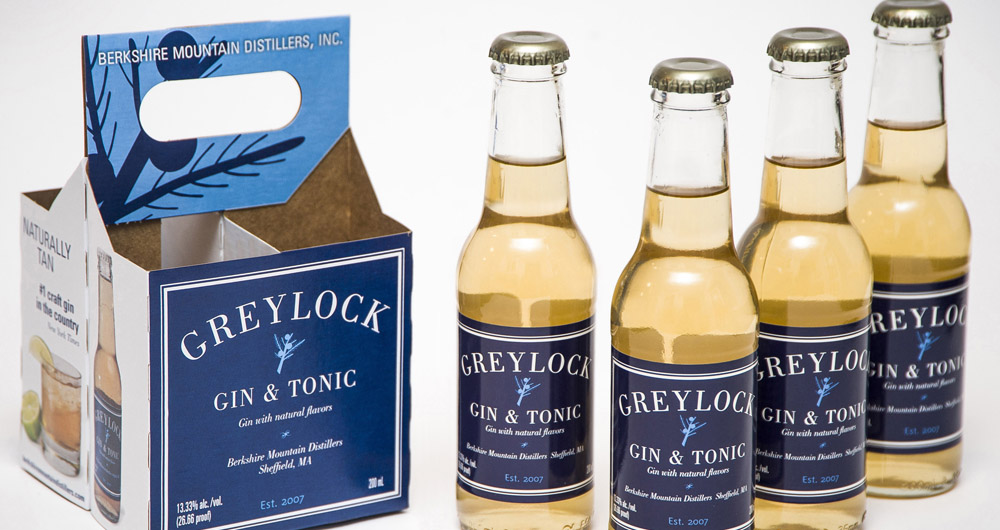 Berkshire Mountain Distillers of Sheffield, Massachusetts, has been at the forefront of New England’s artisanal-booze boom since its 2007 inception. Their Ragged Mountain Rum is world-class by any measure, their Berkshire Bourbon has few rivals in its price range—and that’s just the base model, before you get into their beer-barrel-aging program—and in 2012 Eric Asimov of the New York Times called Berkshire’s Greylock Gin “light, subtle, and complex” in selecting it as the best value among American craft gins.

So Chris Weld, Berkshire’s main man, knows what he’s doing. He makes great spirits. But does that mean he can make great soda? And even if he can pull that off, can he somehow manage to bottle it with the aforementioned gin to produce one of the world’s first decent premixed cocktails? I have great faith in Berkshire Mountain Distillers, but I’ve been burned by a drinking lifetime of shitty bottled and canned abominations masquerading as proper cocktails, so I was skeptical when Greylock Gin & Tonic hit the shelves last week.

Most pre-packaged mixed drinks are undone by two fatal flaws. In an attempt to keep the alcohol percentage low enough for inclusion in the beer cooler, they disregard traditional ingredient ratios, which results in a “margarita” that is 7 parts sour mix to one part tequila. And this heavy hand with the mixer exacerbates the other problem endemic to the breed: Even when the base liquor is reputable, the drinks are too often undone by cruddy costars.

Of course the alcohol’s the best part of any mixed drink, be it pre-bottled or hand-made. But that doesn’t mean it’s the only part, or even the most important part. A traditional gin & tonic has twice as much soda as it does booze, so it can be reasonably argued that the tonic is even more important than the gin. Let’s meet the gin more than halfway, though, and say both components are equally vital. That means bad tonic can doom your drink no matter how great your gin is.

Weld solved the first problem, that of proportion, by keeping the two-to-one ratio in tact, which means each 200-milliliter (6.8-ounce) bottle in a Greylock Gin and Tonic 4-pack ($15.99) is 13.33 percent alcohol: one part 80 proof gin and two parts tonic. And he addressed the issue of mixer integrity by simply making his own damn tonic. He used real cinchona bark to infuse his potion with tonic’s trademark quinine bite, which is why the resulting cocktail is naturally tan colored. It’s also a large part of the reason it tastes so damn good.

Poured into an ice-filled glass, Greylock Gin & Tonic smells like juniper, lemon, and coriander, with supporting traces of ginger, vanilla, and anise. The taste follows the aroma, with an additional bite of pine on the long, dry finish. Berkshire didn’t muddy things up with the fake lime flavor that mars so many inferior pre-assembled drinks, so you’ll need to provide your own wedge, but only if you insist—this potent, convenient, and delicious drink is both complex and nuanced, and it can hold its own without any help from the citrus aisle.

Enter to win a pair of tickets to attend The Hess Collection Seminar and Dinner as part of Boston Wine Festival 2018 at the Boston Harbor Hotel on Wednesday, March 14th. END_OF_DOCUMENT_TOKEN_TO_BE_REPLACED

This year, the festival is welcoming more female wine producers than ever before, making up 20% of all winemakers that will be at the festival. END_OF_DOCUMENT_TOKEN_TO_BE_REPLACED

The holidays are here, so raise a glass. END_OF_DOCUMENT_TOKEN_TO_BE_REPLACED

‘Tis the season to mix a nice, stiff drink. END_OF_DOCUMENT_TOKEN_TO_BE_REPLACED

Warm up with Tito’s on your sweater and Tito’s in your glass. END_OF_DOCUMENT_TOKEN_TO_BE_REPLACED

There’s a ton going on at Idle Hands in Malden this spring. Dan McDonnell and Josh Deering joined me in studio to talk about Maifest, what’s new in the Taproom, and their collaboration with The Black Ale Project. Oh, and don’t miss Idle Hands at BeerAdvocate’s Microbrew Invitational next month! END_OF_DOCUMENT_TOKEN_TO_BE_REPLACED

Giovanna Guzman is the marketing coordinator at Kings Bowl, who you can visit in the Back Bay, Burlington, Lynnfield, Dedham, and soon in the Seaport. We talked beverages, naturally, seeing as it’s Thirsty Thursday. And we sampled sangria. And it was soooo good. END_OF_DOCUMENT_TOKEN_TO_BE_REPLACED

These five words might change your life: Farmer Willie’s Alcoholic Ginger Beer. Co-founders Nico Enriquez and Max Easton were in studio with me this morning. Nine-packs and kegs of Ginger Session coming next week! END_OF_DOCUMENT_TOKEN_TO_BE_REPLACED