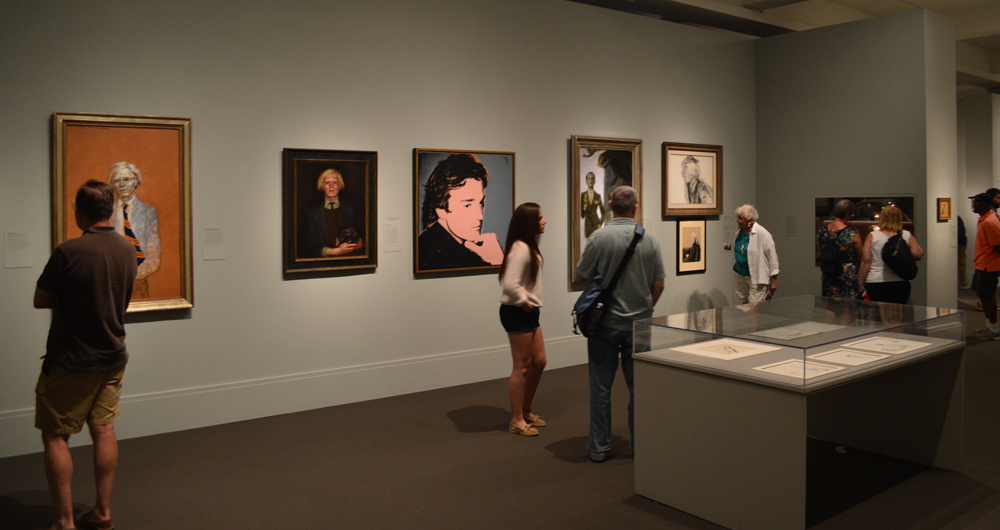 The Museum of Fine Arts continues to draw crowds because of the versatile mix of exhibitions and galleries that span from modern masterpieces to ancient sculptures.  Having a vast array of art does have its cons though.  Navigating the museum can be a bit difficult and choosing what to see can leave the most leveled headed person bewildered.  So as you enter the ivory hued entrance of the MFA, unsure of which direction to go, consider this list of exhibitions your guiding light.

Nestled on the second floor, the “Samba Spirit: Modern Afro Brazilian Art” exhibition features works from 20th century Brazilian artists who have not received much recognition in the United States. The artists, who are from African descent, draw their inspiration from a variety of cultures from America, Europe and Africa. The sculptures and paintings showcase Brazilian music, religious rituals, as well as urban and rural life. The colorful pieces are reminiscent of those during the Harlem Renaissance, except with a zestier flare. Artists include, Heitor dos Prazeres, Maria Auxiliadora da Silva and Waldemiro de Deus. The exhibition runs through October 19. 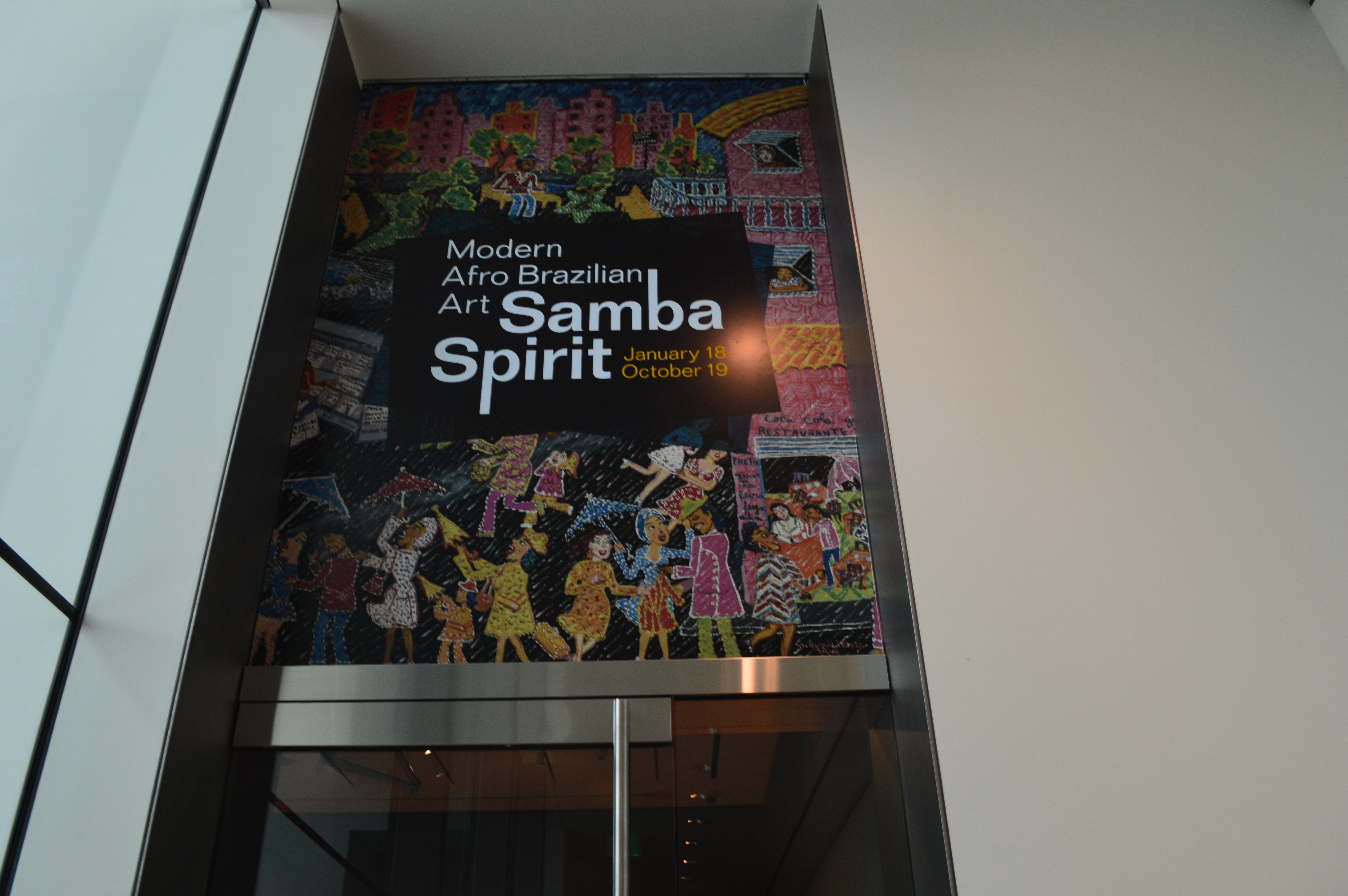 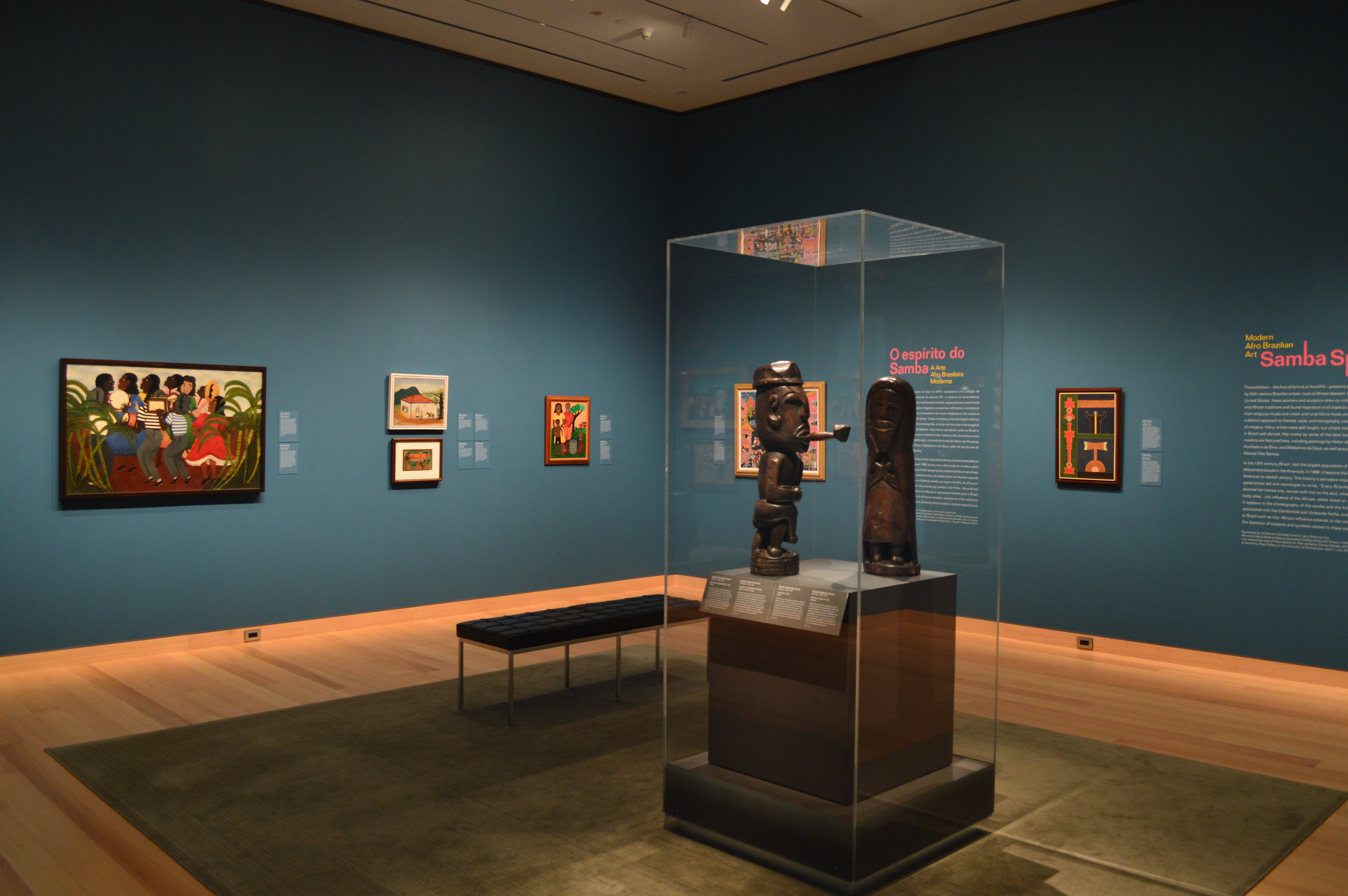 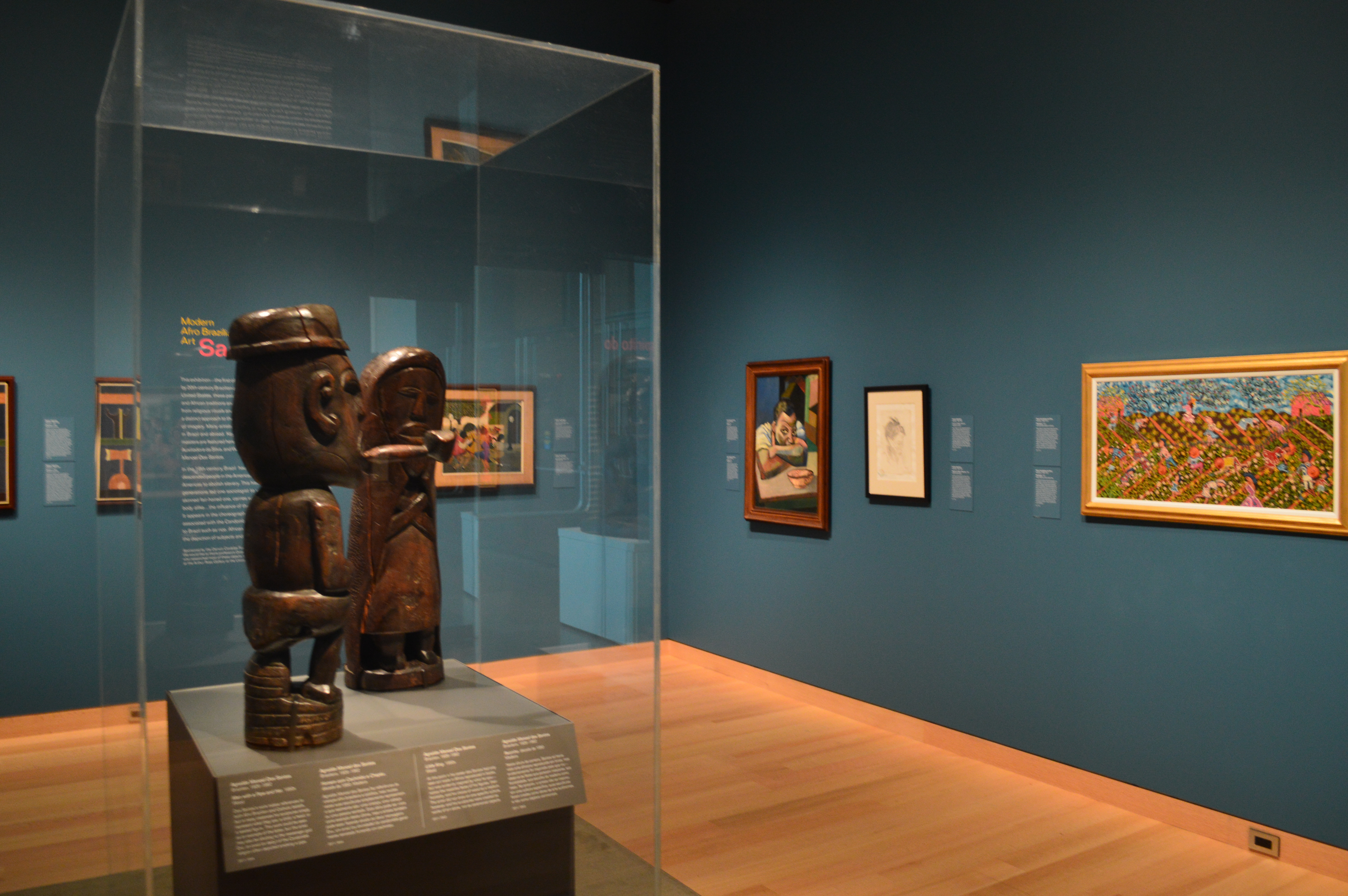 The Linde Family Wing of Contemporary Art will give you a sensory overload of modern art, and if you’re looking for site-specific works at the MFA, look no further than “The Eunice and Julian Cohen Galleria.” It doesn’t get more contemporary than this section. Many of the pieces in “The Eunice and Julian Cohen Galleria” are large scale and soaring, such as the “Landscape, abstracted” exhibit, which is open through July 30 2017. You can’t miss (literally) the work made of threads and staples by Anne Lindberg that hangs on the ceiling. Visitors just need to look up and see a cloud of colorful threads. Also check out the cool neon text “Museum Rules” that hangs in the galleria, always an Instagram favorite. 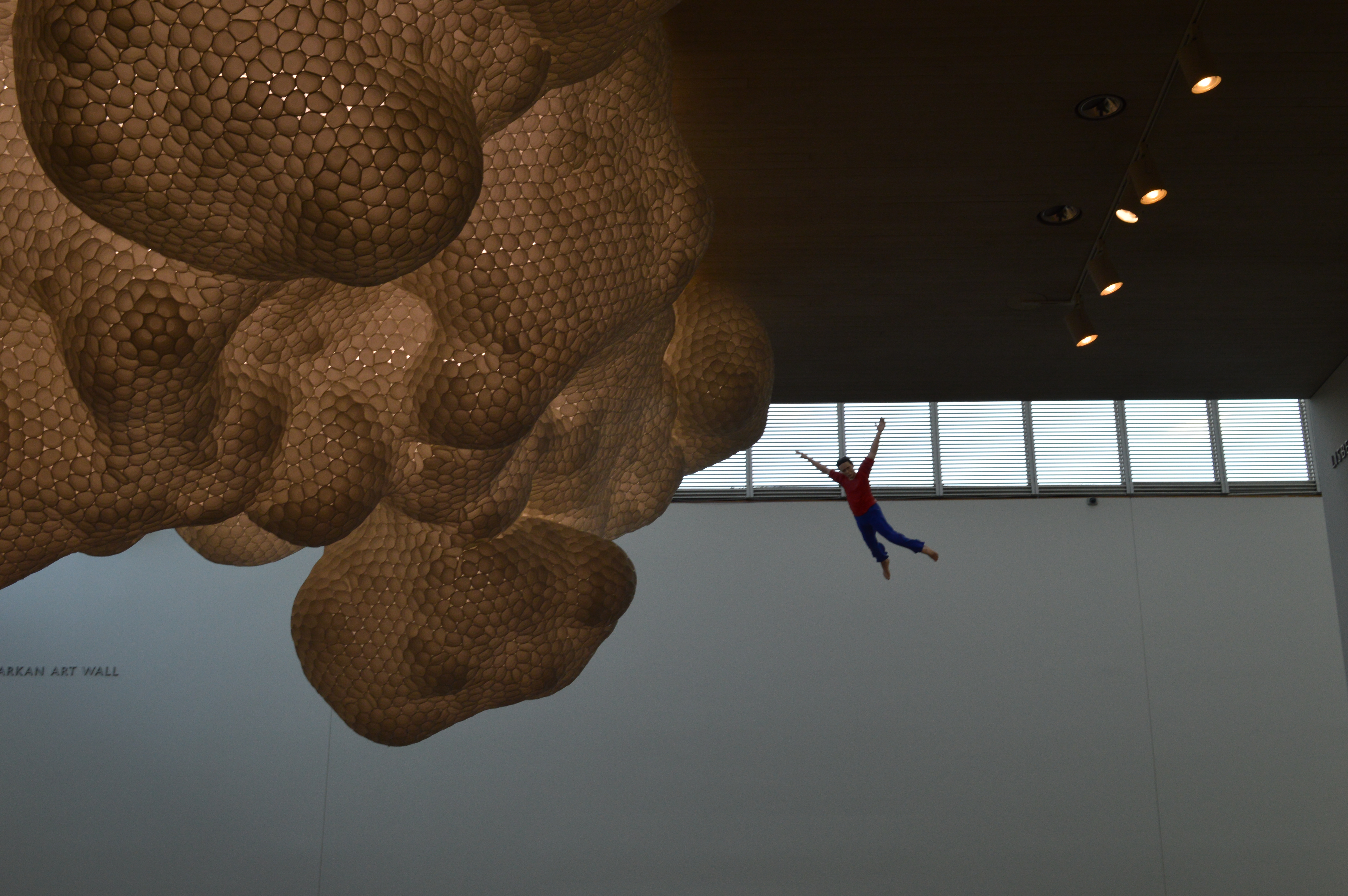 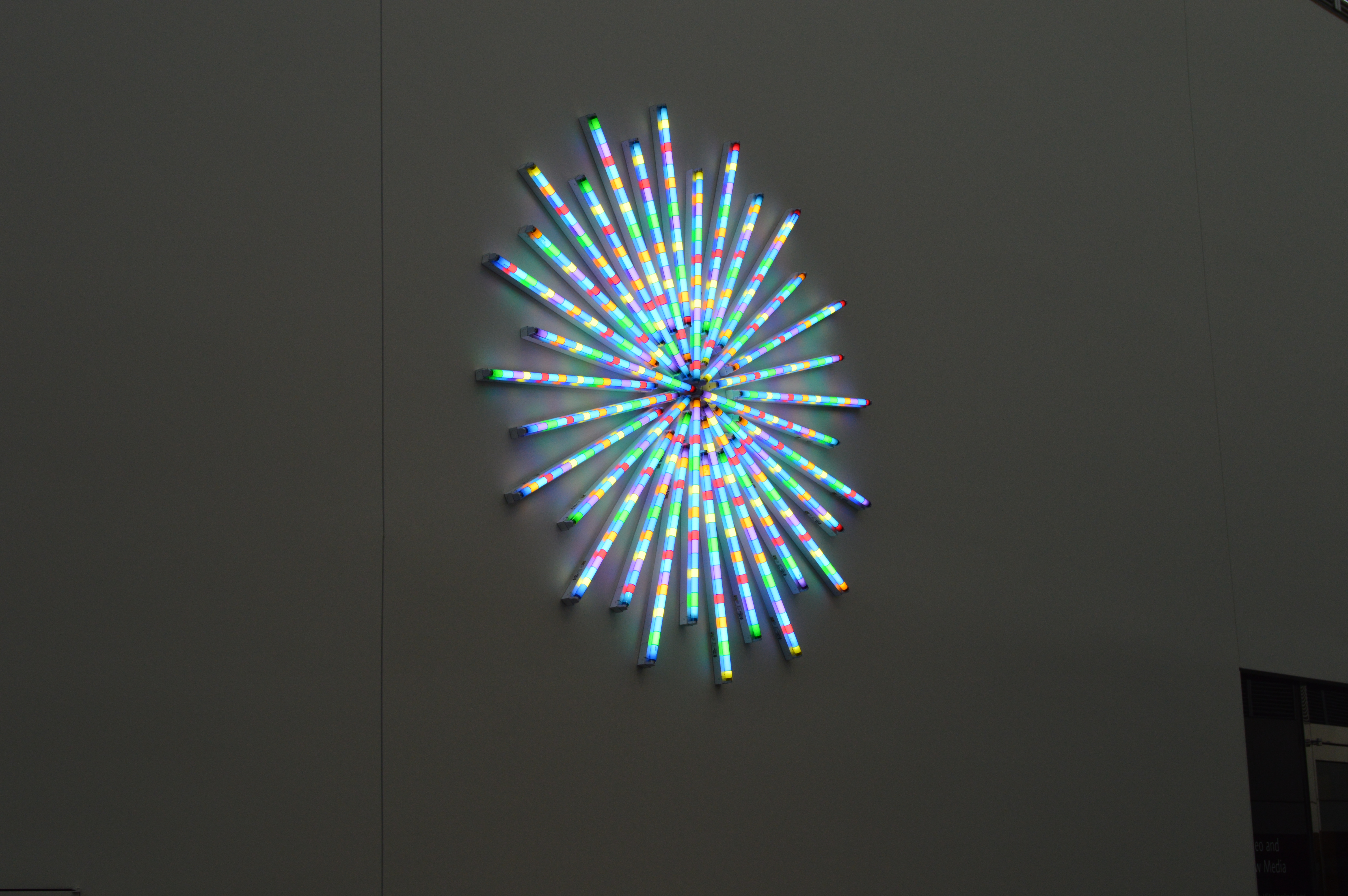 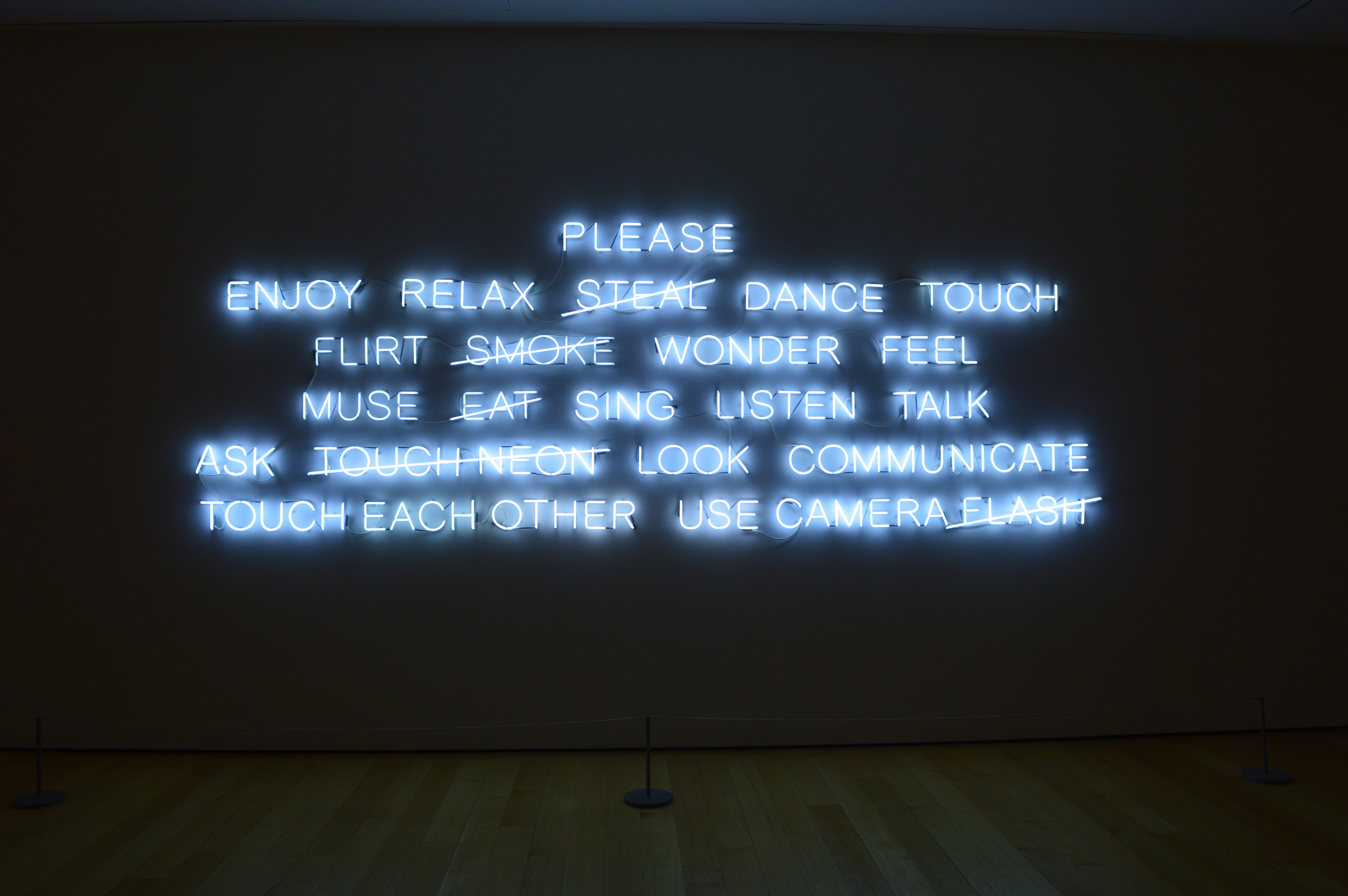 As a child I was fascinated with everything that had to do with ancient Egypt. I even learned how to write my name in hieroglyphics, and “The Mummy” was a very important movie to me. So seeing “The Arts of Ancient Egypt” collection at the MFA was quite a nostalgic experience. The Egyptian collection boasts ancient sarcophaguses of rulers, such as Queen Hayshepsut and large statues of pharaohs. Also, the dim lighting gives off a cinematic tomb-like feel. So if you’re looking to take a blast in the past to ancient Egypt, this collection is a must see. 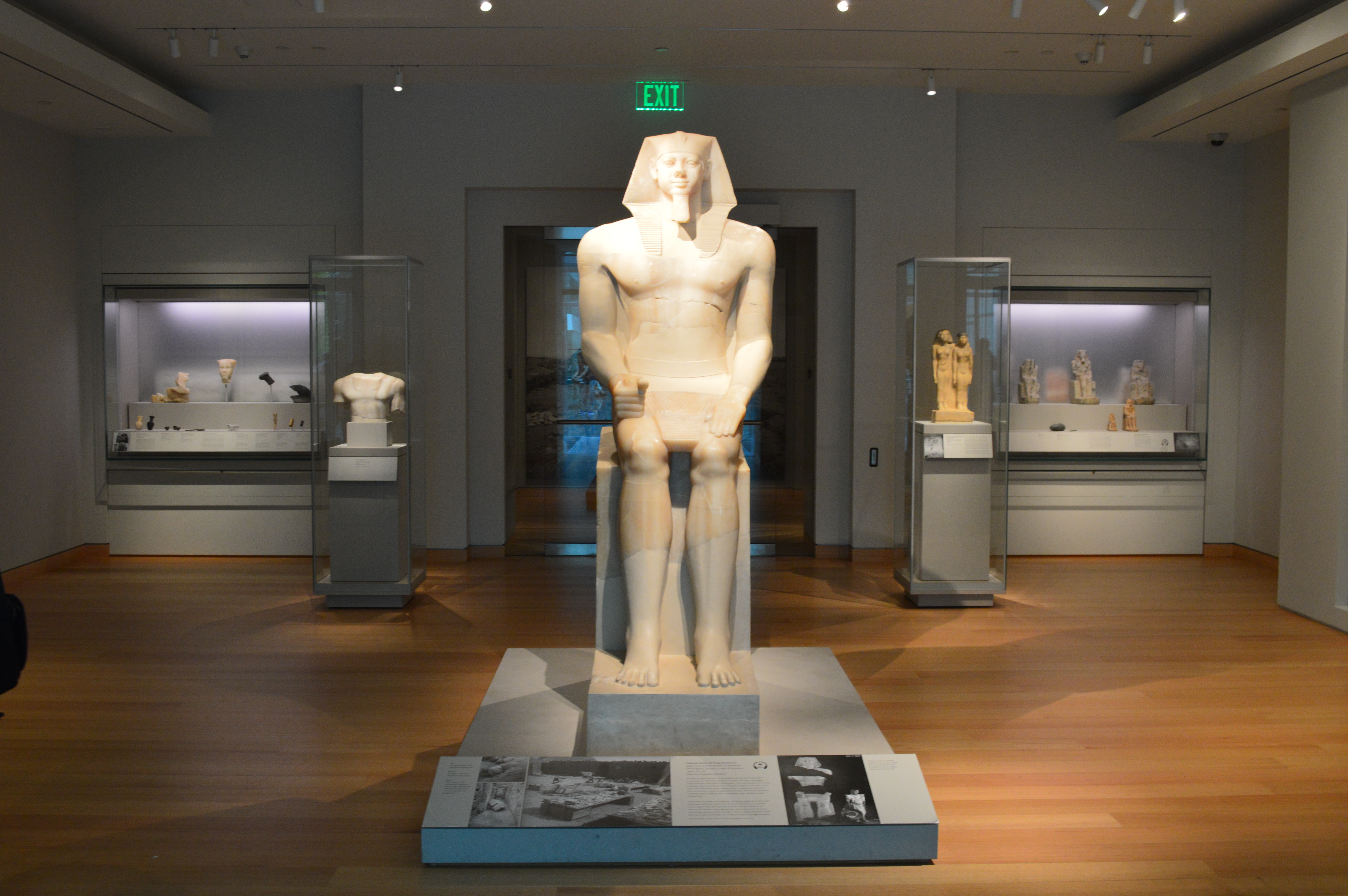 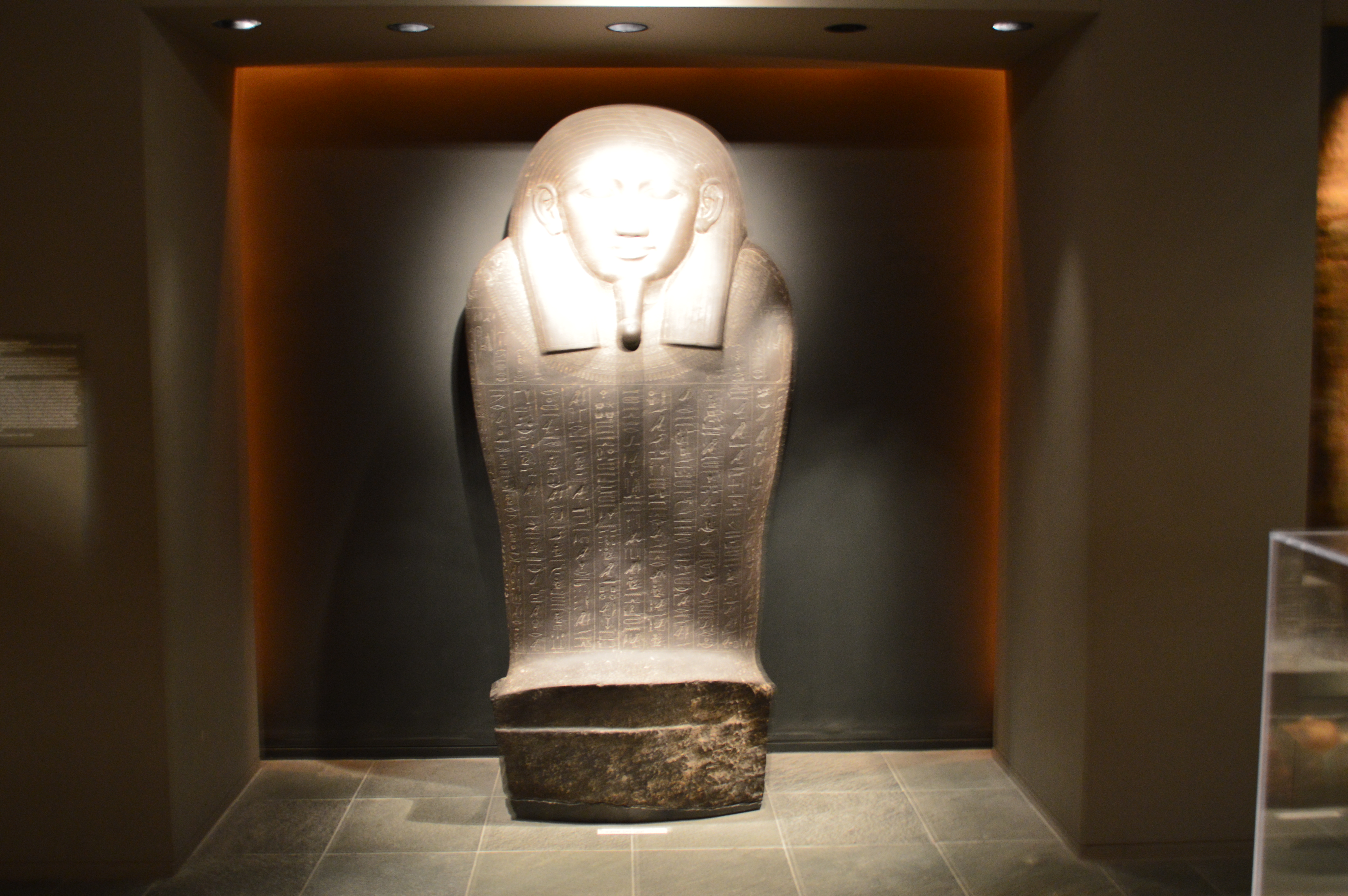 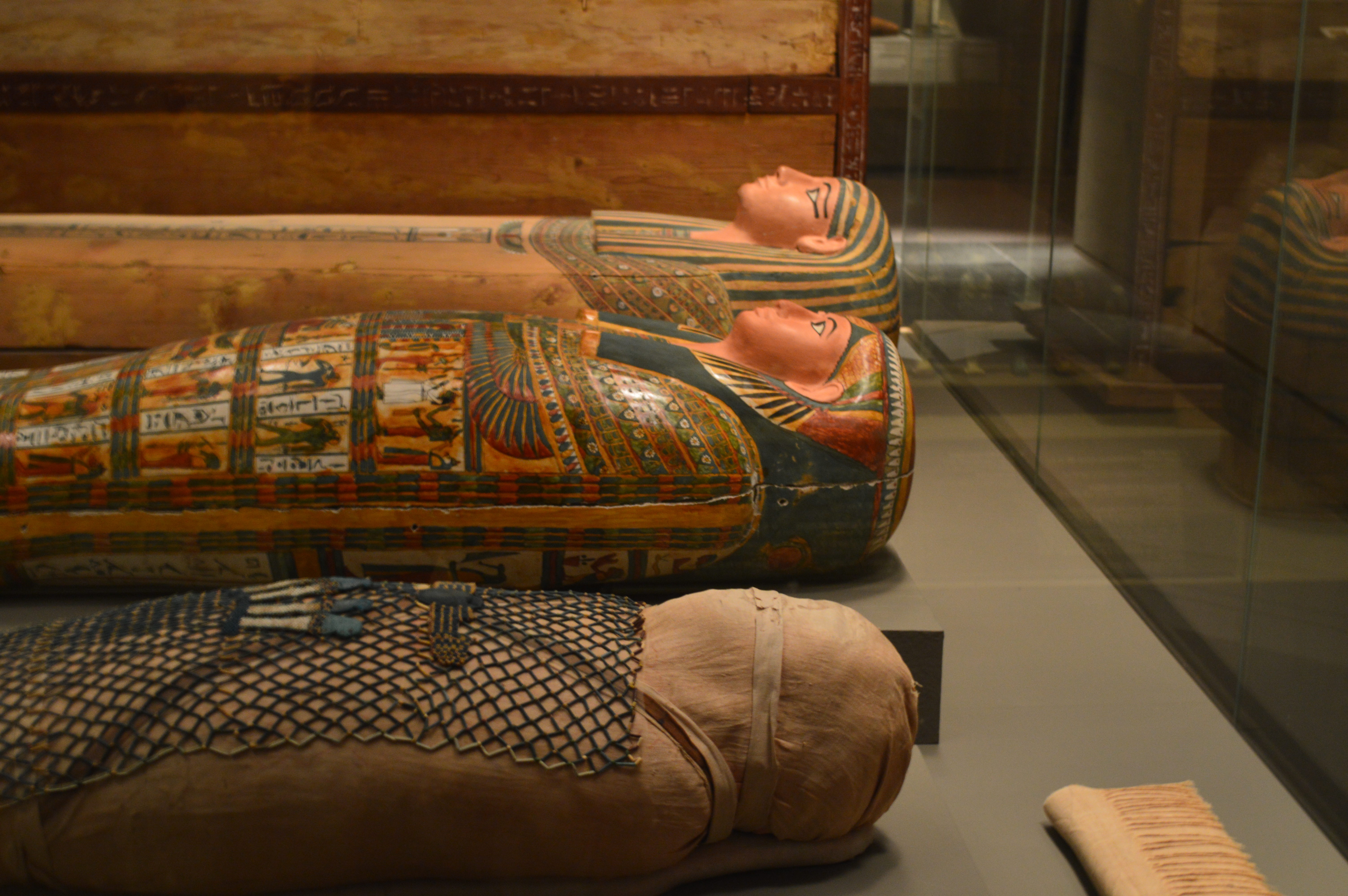 The Art of the Americas wing showcases 53 galleries, but the crown jewel is the “Kristin and Roger Servison Gallery / Arts of the New Nation, 1815–1830” located on the first floor of the wing. Explore the birth of a nation through paintings from Samuel McIntire, John Neagle and Gilbert Stuart. Their works tie neoclassical roots from ancient Greece and Rome to the United States. An essential piece to see is Thomas Sully’s “Passage of the Delaware” (1819), which portrays George Washington’s crossing of the Delaware River during the American Revolution. 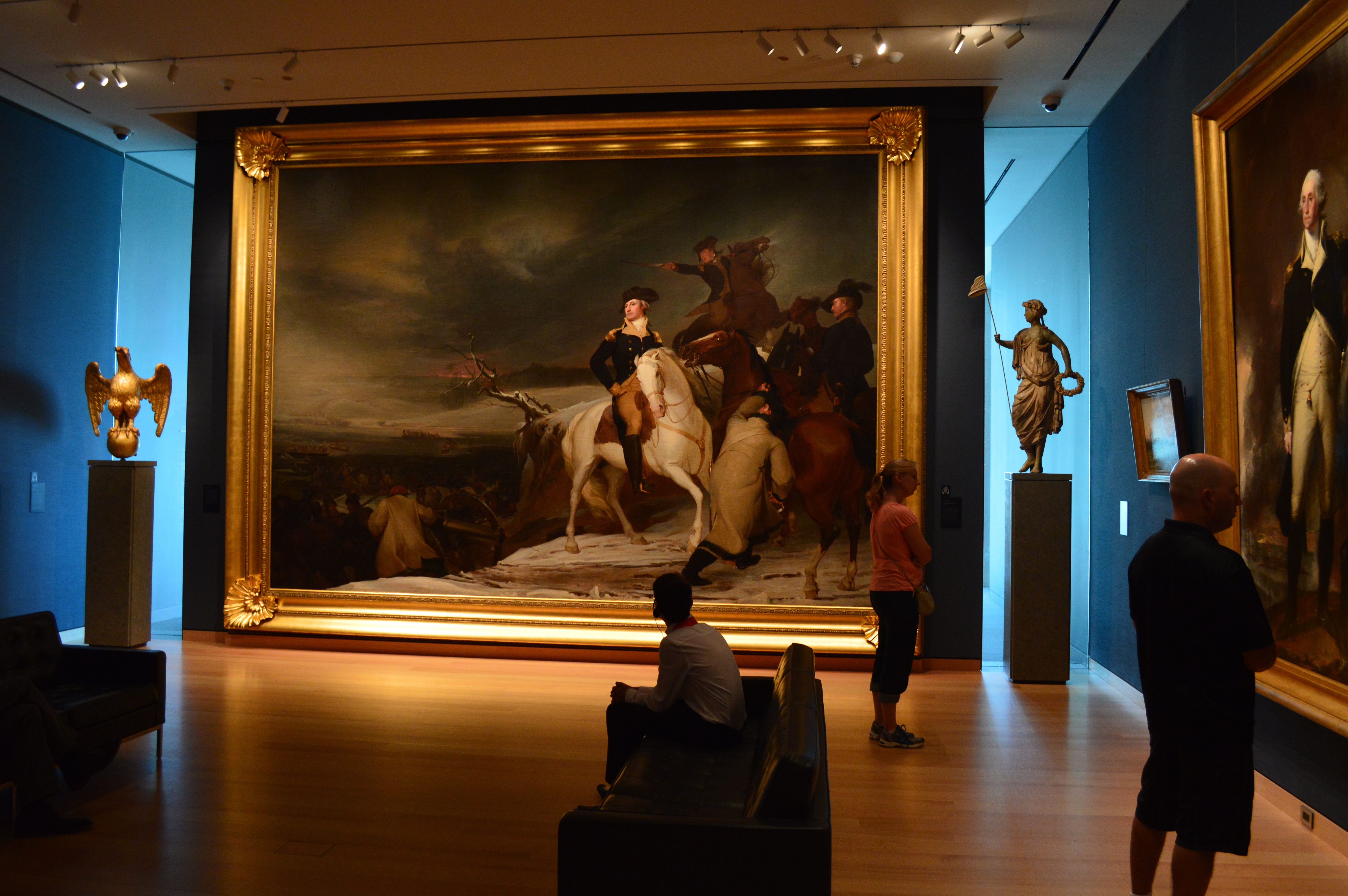 Jamie Wyeth is an American realist painter who is famed for his portraits—he’s painted John F. Kennedy and Andy Warhol (you can see them at this exhibition) to name a few. Along with portraits, the exhibition features sketches, landscapes of Brandywine River Valley and the coasts of Maine, as well as stills of animals and vegetation. My favorite piece was a self-portrait he did of himself wearing a pumpkin on his head, it’s creepy in the sense that it looks like a realistic Scarecrow from Batman, but the coloring and style evoke an Impressionist perception of autumn. The exhibition is open through December 28 2014. 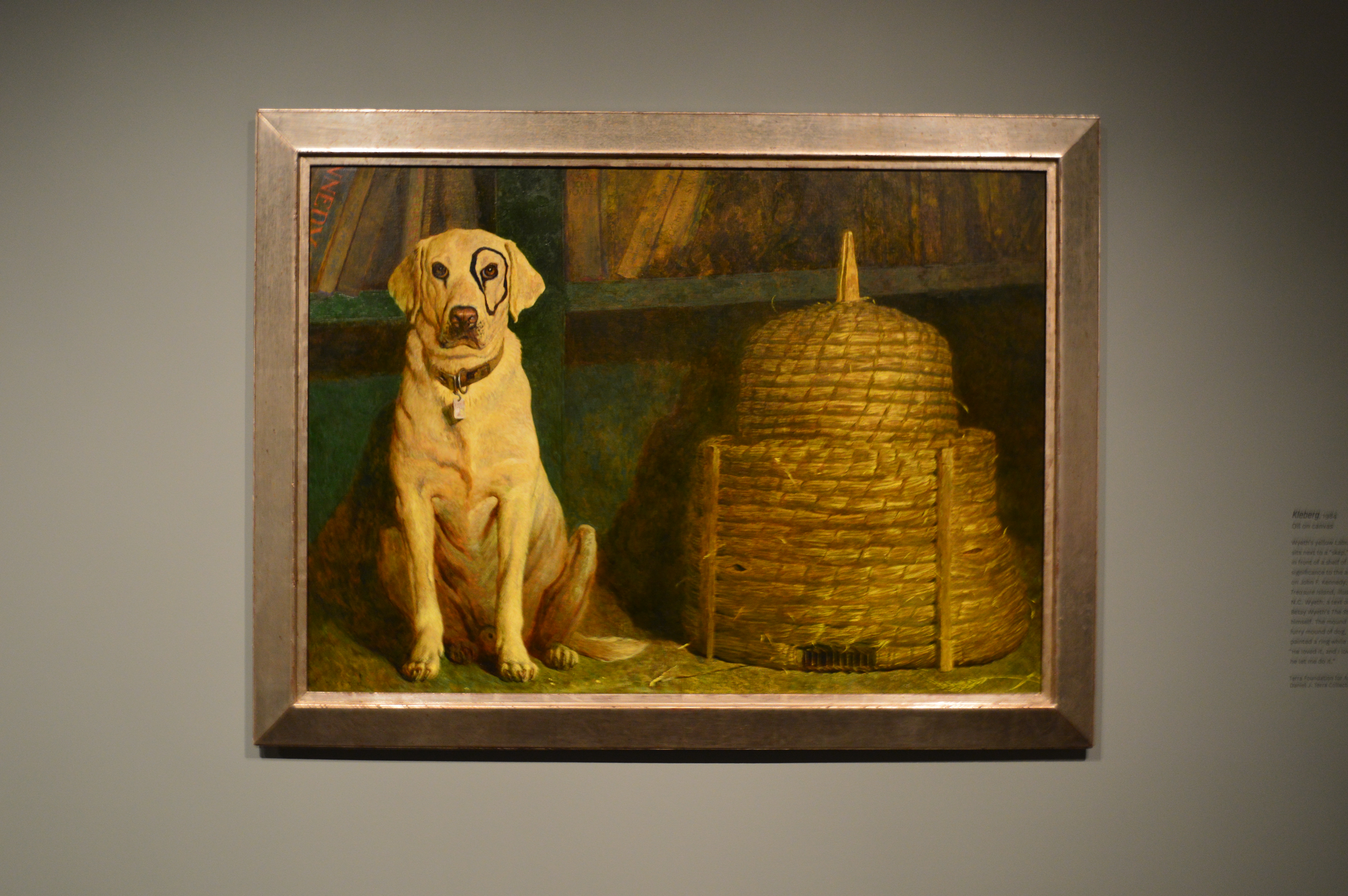 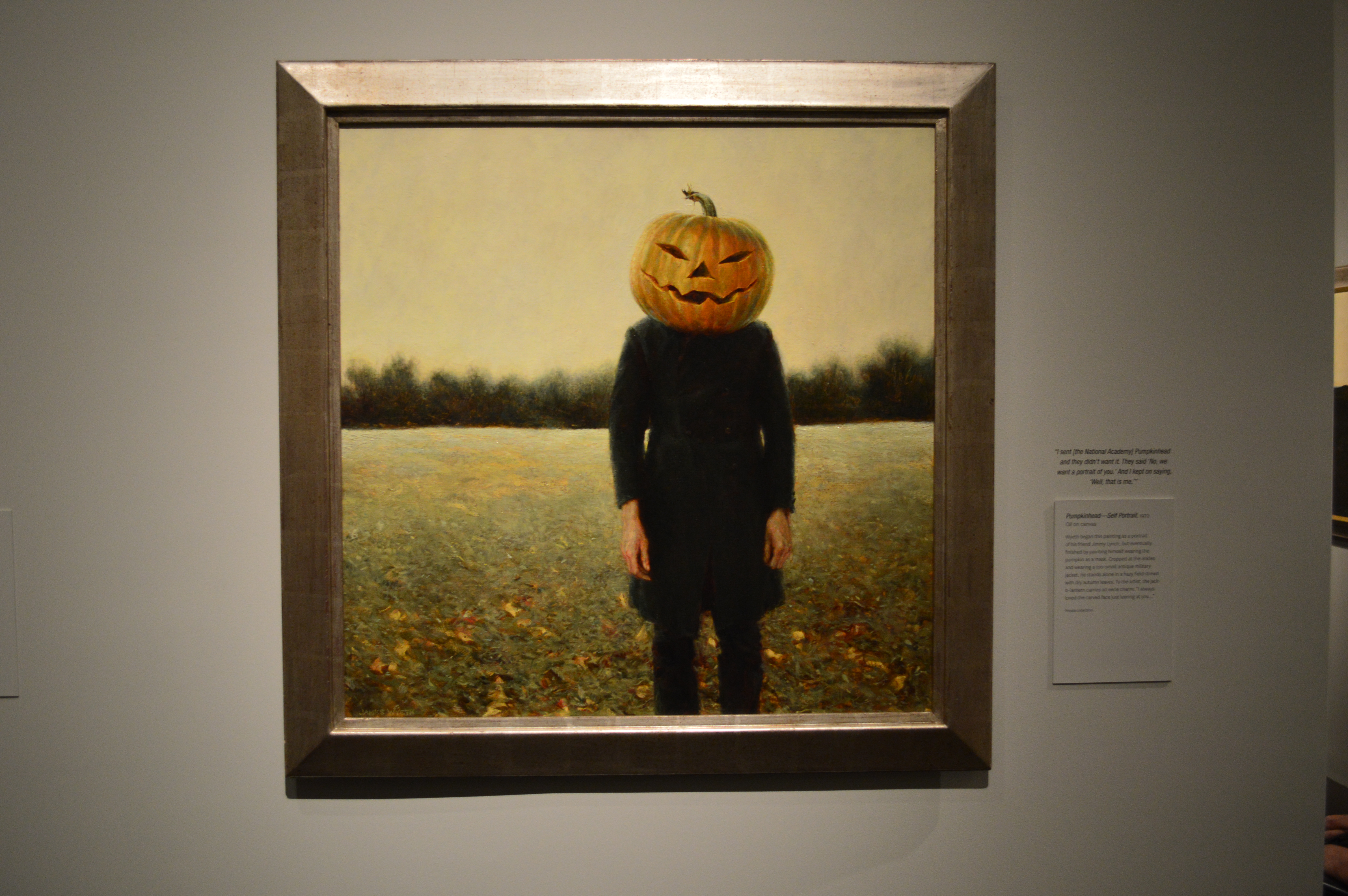