A Meat Lover’s Guide to Veggie Restaurants in Boston 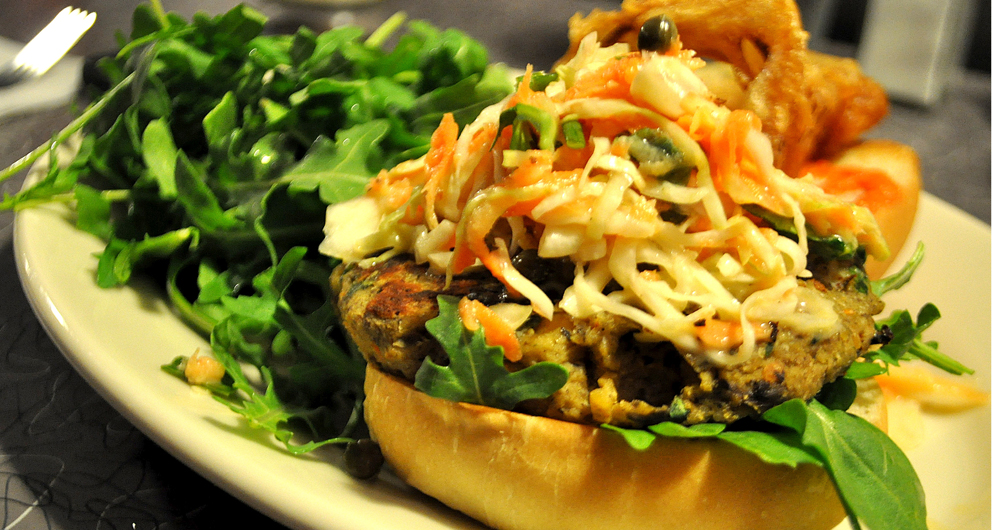 It’s always been difficult for me to muster excitement for vegan and vegetarian food. I mean, who would pick falafel or quinoa over the fleshy, processed goodness of a dirty water hot dog? Apparently, Camberville folks and Bostonites do all the time.

You can’t really blame Metro Boston for its foray into vegetarian and vegan territory. The selection of restaurants for vegheads is so diverse that it’s difficult to dismiss all the menu options as simply being less-than-meat.

I recently visited a few of the top restaurants, diners. and cafes in Boston which serve either entirely meat-free food, or host menus which are predominantly vegetarian or vegan. Here are my skeptical, red-meat-loving reviews:

Holy edible bowls, Batman, this place is strange. Walking into My Thai feels like an insider secret because it’s essentially a little hole in the wall cafe in a Boston neighborhood comprised of other, larger hole in the wall cafes. They’re not much for service (weird of a restaurant that serves such spicy food to not refill your water glass, like, at all), but the food is really something else.

It turns out I’m the kind of veggie-eater who wants some imitation meat in my dishes, and My Thai delivers in a vague and delicious way. I’d recommend the ground “veggie-chicken” wontons and an avocado shake to the brave eaters out there. Delicious, but decidedly weird in presentation.

Notes on flavor:
“Why are there so many plants in here? I feel like I’m visiting my grandmother.”
“Whose job is it to make sure fake meat is just as leathery and textured as actual meat?”
“My tongue is like the surface of the sun right now. Can I drink from the watering can that guy is using to maintain this jungle of houseplants?”

Final score:
4 out of 5 watery eyeballs for flavor so intense, you forget it’s not meaty
2 out of 5 mysteriously sticky tables for ambience 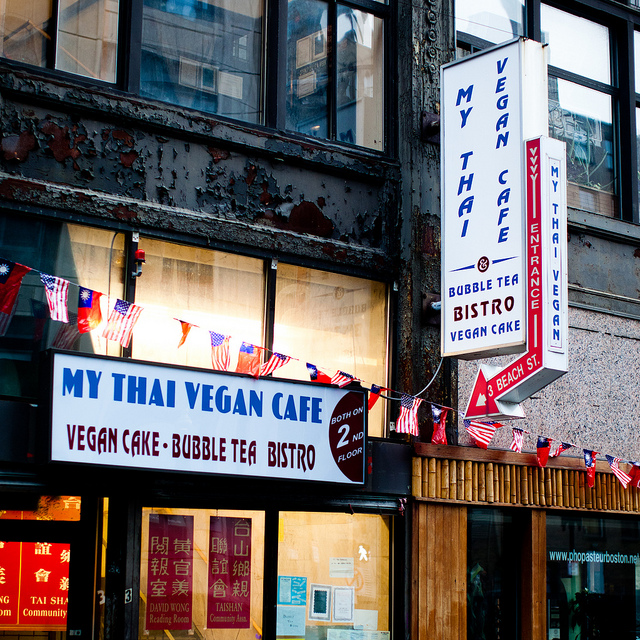 This place is, like most businesses in Harvard Square, located underneath the street in a cozy basement space also occupied by Club Passim. When bands play shows in the back, Veggie Planet continues to serve its crunchy customers in the front room.

The “Safe and Sound” ordered on top of pizza dough is delicious, although when the guy at the counter asked if I wanted it made unsafe, I hesitated slightly before saying yes. Turns out “unsafe” means “additional hot chili sauce,” which is charming. Nothing like a bunch of asiago cheese and spinach to make you forget how much you love pepperoni.

The dinner crowd at Veggie Planet is decidedly less family-oriented than the lunch crowd at Veggie Galaxy, but in the summer it’s typically devoid of college students. If you want to try some of their pizzas, or toss the toppings onto a pile of coconut rice, I’d recommend getting your visit in before the Harvard students return en masse.
[Editor’s Note: This article was written before Veggie Planet announced it will be closing its doors before the end of August. Hurry over there and try it out before then, or head to Veggie Galaxy in Central Square for likeminded dishes]

Some notes on flavor:
“The whole ‘guide to ordering’ section on this menu is a little condescending.”
“Maybe I’m just feeling defensive because I’m afraid they’ll smell cheeseburger on me.”
“I should have tried the seasonal crudite veggie medley just to say that I had.”

Final score:
4 out of 5 so-close-but-no-cigars because pizza is ultimately better when there’s meat involved
3 out of 5 loud amp feedback whines because of the shared space 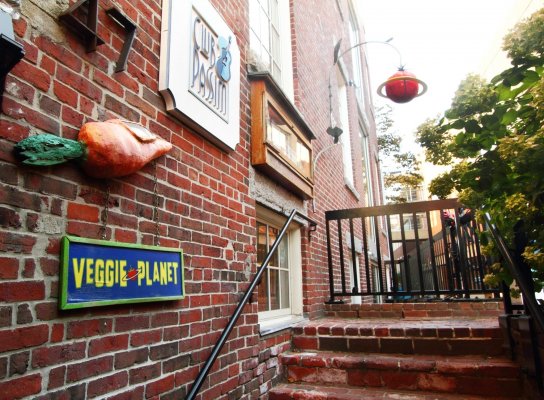 To my disappointment, Veggie Galaxy is nothing like Pizza Planet in Toy Story. There isn’t a single arcade game in the place, which was infuriating. Luckily, I was placated by the diner’s huge Americana menu, which appealed to my 1950s white-bread nostalgia, although I do realize most 1950s teens would have thought vegan food was ridiculous.

The options at Veggie Galaxy are not ridiculous. The diner seems to pride itself on creating veggie-based versions of recognizable foods, which is a departure from places like Life Alive. You want a reuben? Great, but it’s mostly cabbage-based. The “turkey club” is actually a tofu and tempeh-bacon sandwich, and the “tuna melt” is just listed as a “melt.”

I ordered the Rachel, or a seitan-based sandwich with swiss cheese and Russian dressing, and a side of sauteed chard because the name made me laugh. I also had gluten-free, coconut-based strawberry ice cream with coconut whipped cream, and that combo was just a piece of music.

Some notes on flavor:
“Wow, it’s really hard to find something on this menu that doesn’t incorporate red cabbage slaw.”
“‘Slaw’ and ‘chard’ don’t sound like edible objects, but they totally are.”
“I want to die face-down in this ice cream dish.”

Final score:
5 out of 5 recycled soy milk cartons for taste (especially the bakery)
3 out of 5 disappointed Buzz Lightyears for ambience 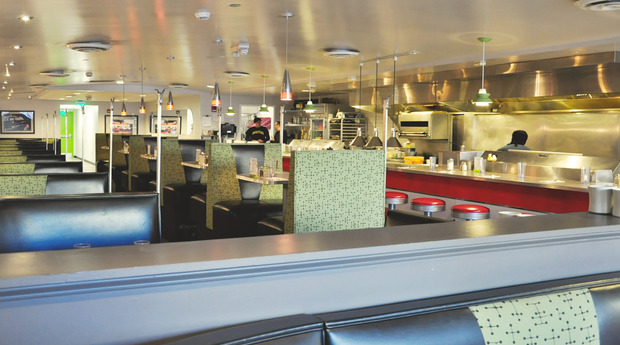 If the eateries in Central Square were the 1960s music scene, Life Alive would be a Beatles concert. In fact, if you ever walk by Life Alive’s steamed-up windows and the line isn’t trailing around the block, you should probably call the cops because something has gone terribly wrong. Cambridge citizens love their freshly squeezed juice.

I ordered what Life Alive calls a “filling bowl” of their Goddess meal, because the menu calls it their “signature dish.” Full disclosure: I also wanted it to make me feel like a goddess. I also threw in an egg and some avocado on the side, because vegetarian food makes me nervous that I’m not going to fill up. I washed that down with a freshly squeezed “Hive Alive,” which is what Life Alive calls its watery, vaguely apple flavored lemonade. It is sweet and confusing.

Notes on flavor include:
“Why do I always forget that beets are really good?”
“Have you ever tasted something so fresh you felt your chakras realign?”
“No, seriously, can I buy myself beets at the grocery store? Do people do this?”

Anyone who’s into whimsical, holistic-looking decor and bold, warm colors in the orange family will enjoy a sit-down meal at Life Alive. If the food isn’t healthy and flavorful enough for you (and it will be, trust me), the conversations held between yogis and folks who looked like off-duty Hare Krishnas are interesting enough to merit staying for a while.

Final score:
3 out of 5 canvas beaded sandals for taste
4 out of 5 sage smudge sticks for ambience 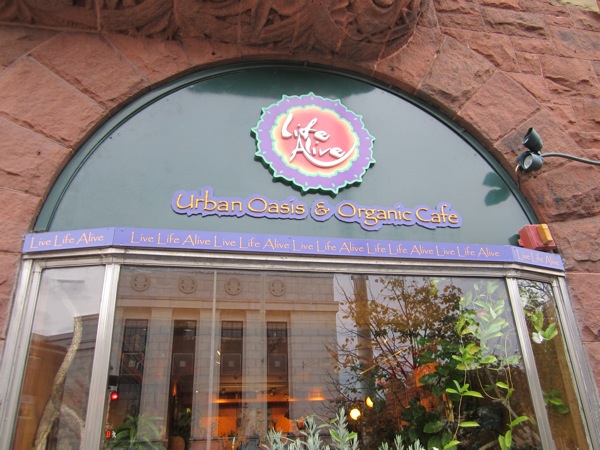 I cherish any opportunity to trek out to Allston because I happen to love people-watching college students as they toss their TVs into the street from third story windows.

Grasshopper’s Kale and Mushroom Delight is as charming and delicious as the name suggests, and the menu also offers what every asian restaurant should: a platter of house special appetizers for less than ten bucks, which eliminates the anxiety of making a choice. I had the lo mein with vegi-shrimp as my main course; though the flavor of the noodle-sauce felt familiar, the vegi-shrimp was too rubbery to pass as shrimp and too fishy to pass as anything else.

Notes on flavor:
“I wish I had gone with actual veggies instead of fake meat, yet again.”
“I should add kale to my shopping list, right under beets.”

Notes on flavor:
3 out of 5 rubber shrimp toys because that’s what I was eating
3 out of 5 car alarms for ambience,/br> 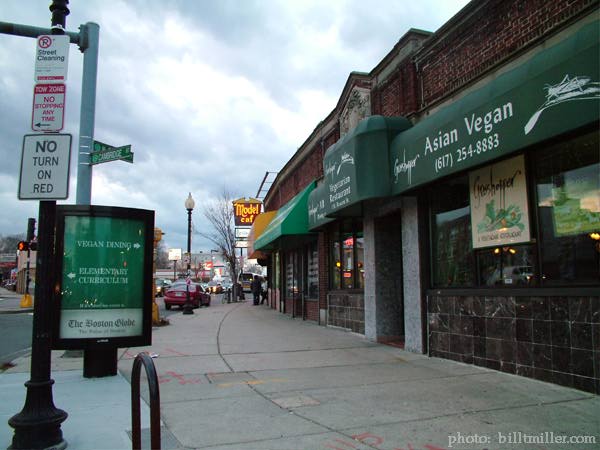 Now this is a foodie’s vegan restaurant! All the wooden, planked furniture looks like it belongs on a porch, there are chalkboards incorporated into the decor, and the menu is full of dishes with “aioli” and “mango habanero.” In fact, root is the only veggie restaurant on my meat lover’s tour that made me forget my assignment temporarily, because I was so excited to pick something off the menu. The descriptions did not disappoint.

The root burger, made of black beans and quinoa, is so hearty that it’s difficult to wolf it down with the herbed fries included in the order. Also, the honey lindenflower iced tea does not include free refills, but I know because I asked, and if you order it, you’re going to want to double check.

Some notes on flavor:
“Who knew hippies could be so fancy?”
“I’m so into these fries that I want to buy that lopsided art-school oil painting above my chair.”
“I wish I could adopt one of these cinnamon crumb muffins and send it to private school.”

Final score:
5 out of 5 hyperbolic metaphors for taste
4 out of 5 fancy adult barbecue shirts for ambience 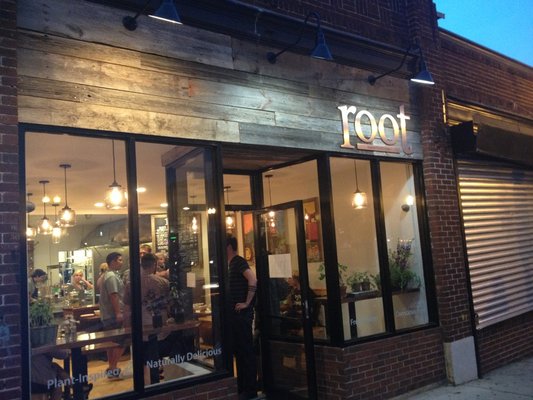