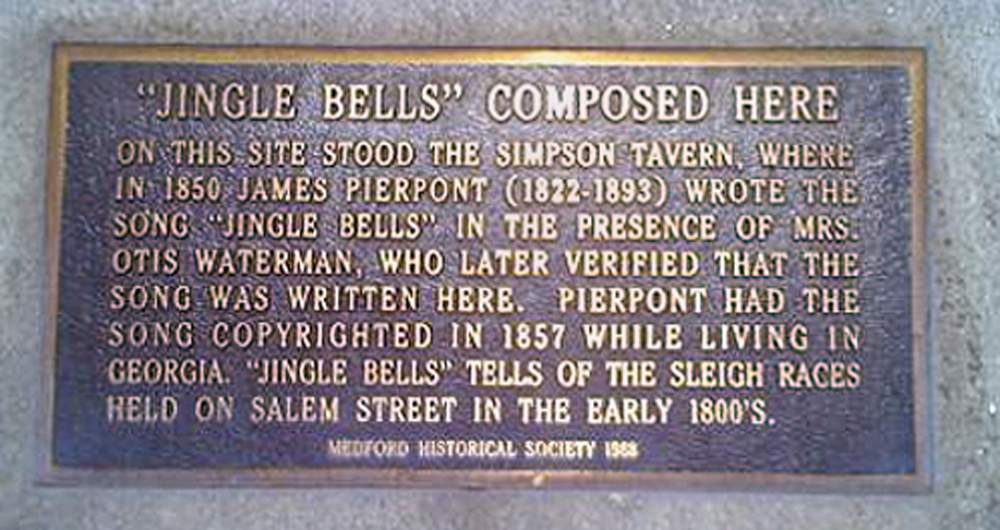 Greeting from Jingle Town, er, Medford! Did you know that Medford, the tracksuit to Somerville’s skinny pants, was the birthplace of the enduring Christmas classic “Jingle Bells”? We’ve got a plaque to prove it! James Lord Peirpoint wrote it right there on High Street, in the empty storefront next to the all-you-can-eat sushi place. OK, he was in a tavern because it was 1850 and you still had to order sushi by the roll back then. Savannah, GA claims that Peirpoint wrote the song while living in their sub-tropical sweatbox, but we’re going to treat that claim like we do everything else from below the Charles River.

That’s right, we’re not going to acknowledge it exists.

Have fun not existing, Savannah, GA! And, uh, Milton. And Rhode Island, I guess. Moving on.

“Jingle Bells” isn’t the only tuneful yuletide jam to eminate from The Hub. Hell, there’s like 8 of them! Join us as we take a cursory glance at our favorite JB variants and other, significantly less popular Christmas classics.

“Jingle Bells” by Ray Conniff
This Attleboro native was one of the biggest arrangers in post-war America, the last time when arranging for a pop symphony was something people actually cared about. Needless to say, his soft, orchestral pop is slightly out of step with contemporary tastes, but his swinging ’50s and ’60s Christmas album have all the schmaltz and shimmer we expect from the season.

“Jingle Bells, Batman Smells” by Your 5th Grade Class
Fart jokes and comic book heroes together at last in one of the school bus’ greatest choral compositions. It could be argued that this version is actually more popular than the version it parodies — the mystique of Robin laying an egg never wears away — but I’m going to hang on to this tiny shred of dignity I have left.

“Jingle Bells” by the Singing Dogs
If you were a cool kid in the ’90s you got a Color Me Bad CD or maybe Soundgarden. If you were a nerd, your aunts and uncles went with the easy play and bought you a Dr. Demento compilation. And then you grew up to be a music critic that believes The Singing Dogs is one of the most profound deconstructions of American popular music to ever grace the airwaves.

“Italian Jingle Bells” by Lou Monte
In what could be described as the most Medford song of all time, New York-based mid-century novelty musician Lou Monte doubles down and records Jingle Bells en italiano. I’m going to rock this on my headphones this weekend while I watch the pastry-tourists crash their cars in front of LaCassia’s. Watching cannoli-craving exurbanites crash their SUVs is the best free entertainment ever.

Best of the Rest In Boston

“The Christmas Song” by Canned Heat featuring The Chipmunks
Tehnically Canned Heat were an L.A. band but mainman Al Wilson was an Arlington native and Boston University Grad before he left for the other coast. I’m claiming this song because a.) Canned Heat is one of the best bands ever b.) this is one of the most burly, belligerent guitar tones ever put to tape under the guise of “Christmas” and c.) The Chipmunks.

“Come on to the Christmas Party” by The Snowballs
Continuing with that Chipmunks thing, here’s The J Geils Band pitched all the way up for their only entry into the holiday canon. Recorded at the height of the band’s popularity — right in between their massive albums “Love Stinks” and “Freeze Frame” — legend says it was only played once on WBCN before being locked away for years. Locked away for good reason, I might add.

“All I Want for Christmas is My Girl” by New Edition
Every time I get bummed about the current state of R&B, I bust out my trusty New Edition records. I spent a lot of 2014 listening to New Edition. So it only makes sense that when the holidays come ’round “Christmas All Over the World” — the last album of the Bobby Brown era — and this “Candy Girl” tie-in are glued to my stereo.

“Run Run Rudolph” by Joe Perry
Look, I love the Joe Perry Project as much as any other Aerosmith-loving a-hole from the North Shore, but this is bad. Terrible, really. But in that terrible, soft-focus, out-of-key sort of way that actually makes it more endearing than his kinda-sorta-good new Christmas EP. I dunno, sometimes its tough to be an Aerosmith fan.

Enter to win tickets to see Trio Da Kali at The Villa Victoria Center of the Arts (Newton, MA) on April 10th. END_OF_DOCUMENT_TOKEN_TO_BE_REPLACED

END_OF_DOCUMENT_TOKEN_TO_BE_REPLACED

Enter to win tickets to Rhye at The Paradise on February 28th. END_OF_DOCUMENT_TOKEN_TO_BE_REPLACED

Enter to win a pair of tickets to attend The Hess Collection Seminar and Dinner as part of Boston Wine Festival 2018 at the Boston Harbor Hotel on Wednesday, March 14th. END_OF_DOCUMENT_TOKEN_TO_BE_REPLACED

Her new album has been pushed back, but we have Kimbra’s new single for you. END_OF_DOCUMENT_TOKEN_TO_BE_REPLACED

The folk duo returns with a new record this week. END_OF_DOCUMENT_TOKEN_TO_BE_REPLACED

Now that we’re done looking back at 2017, let’s look ahead at 2018. END_OF_DOCUMENT_TOKEN_TO_BE_REPLACED

Our first Song of the Week for 2018. END_OF_DOCUMENT_TOKEN_TO_BE_REPLACED