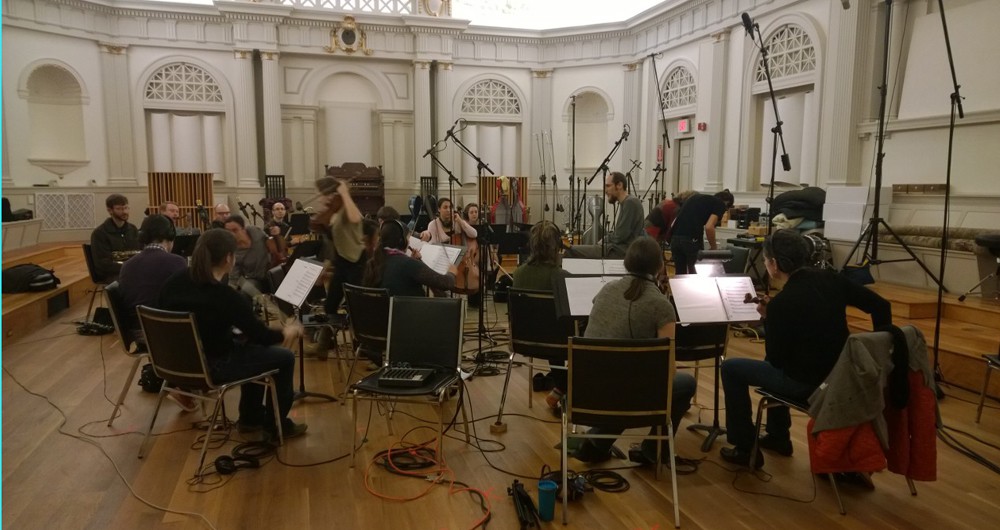 “There are three key factors that will determine which beard or mustache style is best for you.”

What do these words sound like? If you guessed “instructions for beard and mustache growing and maintenance,” then you’d be right and wrong. The line does come from a generic set of facial grooming tips for men, but it’s also the first lyric of the song “How To Grow A Beard/Mustache.” No, you didn’t misread that last bit. The above sentence doubles as manual and melody.

The song is one of about a dozen tracks from the Household Items project, the brainchild of New England Conservatory alumnus Brian Friedland. A jazz composer and pianist by training, Friedland initially discovered the musical potential of product labels, guides, and warnings while he was living in Los Angeles in 2005. He was struggling to find text for a collaboration with an opera singer, who suggested he consult self-help books – less for a pick-me-up and more for verbal inspiration.

“My cat pooped on the carpet before I could make it to the bookstore,” Friedland tells BDCwire. “As I was cleaning up the mess, I noticed the warning label on the can of ‘Spot Shot’ carpet cleaner.”

Two weeks later, Friedland had transcribed the list and composed the music for what would become the project’s catalyst. Using cutouts from herbal tea boxes and other knick-knacks, he gradually wrote a few more songs before leaving California for Boston in the fall of 2007. By the time he reached the east coast, Friedland had become obsessed with the idea. “I wanted to assemble enough of these tunes to put out an album and go on tour, which really got me hunting for composition-inspiring products.”

It sounds like a gimmick at first, but the process involves a great deal of research, writing, trial, and error. Friedland emphasizes the importance of the product itself, saying the chosen item and the text it provides always comes first. If it isn’t “sufficiently ridiculous,” he moves on to the next bout of domestic things for inspiration.

“I like to give each product its own unique identity, so the sounds range from discordant to saccharine, funky to operatic, delicate moments to sheer madness. As I settle on a few melodic lines and an accompanying piano part, I start to think about the piece as a whole.”

As the years passed, the project grew much larger than Friedland had ever anticipated. What originally began as a simple duet between piano accompaniment and voice became a more complex, collaborative process involving additional vocalists, musicians, and artists.

Friedland toured the country in the years that followed, playing small gigs at clubs and coffee shops. Audience attendance wasn’t always high, but the positive reactions – even those consisting of surprise and confusion – egged him on even further. When he returned to Boston, Friedland set out to expand the project with parts for a 23-piece orchestra and more multimedia presentations. However, bags of Pirate’s Booty alone wouldn’t provide sufficient funding, so he turned to Kickstarter.

In May of 2014, Friedland created a Kickstarter fund for a Household Items YouTube Series. The endgame? Record additional music for 10 already composed songs and create unique, educational, and comedic videos with the help of three artists, 23 musicians, a photographer, and a dancer. The project reached its $7,500 funding goal within the 30 days allotted by Kickstarter, granting Friedland and his collaborators the financial freedom they would need to accomplish the task.

BDCwire attended one of the funded recording sessions at Roslindale’s Futura Productions studio last November. Friedland, vocalist Laura Grill, and 23 musicians from the greater Boston area were on hand for the occasion. At the time, the leader of the pack boasted a massive growth of beard. “I’m growing it for the ‘ How To Grow A Beard/Mustache’ video,” Friedland explained. When it came time for video production, he wanted to use his own face to demonstrate the instructions-based lyrics. 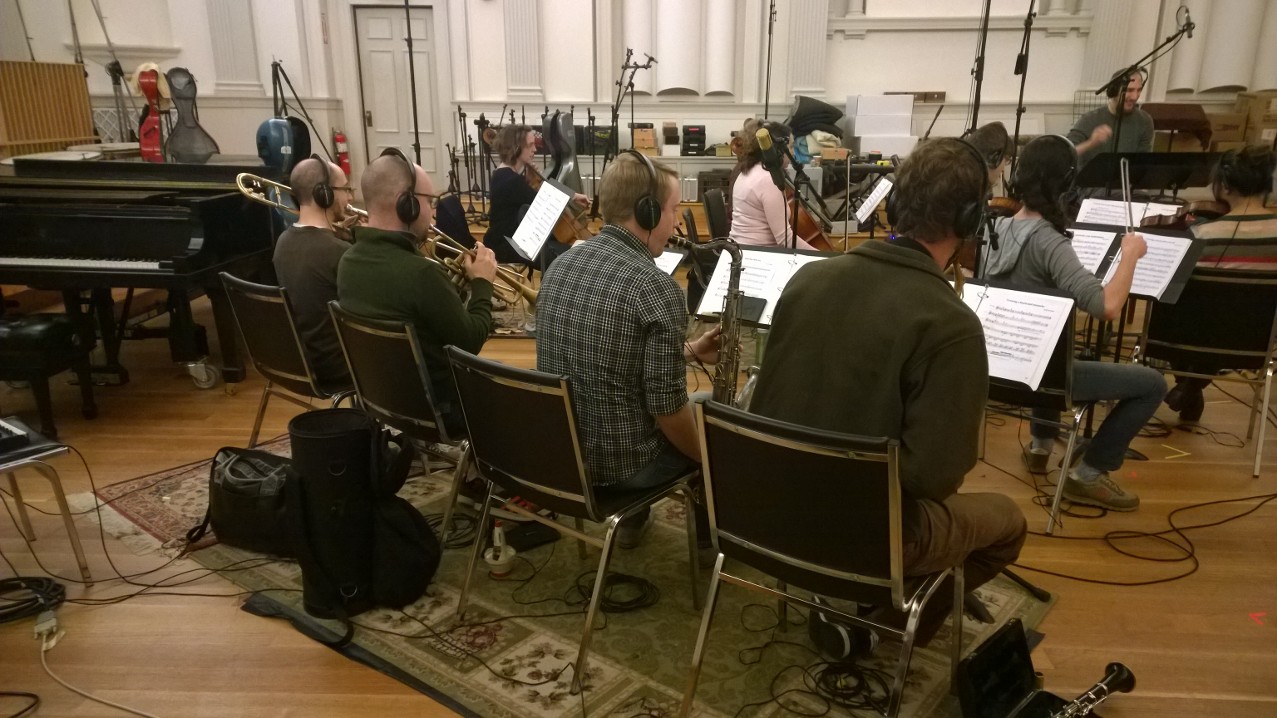 This all sounds like a lot of fun, but you still might be wondering, “What’s the point?” If you ask Friedland this point-blank, the Brookline Music School teacher can’t help but smile when he talks about his students.

“I’ve shared my finished videos with many of my young music students and their laughter and excitement shows a lot of potential for this music to entertain children,” he notes. “It could potentially help students turn their favorite stories, advertisements, or their own work into songs [that demonstrate] connections between language, music, and emotions.”

For now, Friedland is almost entirely focused on finishing the project, especially five special YouTube videos using text donated by his bigger Kickstarter backers, but he also has a concert to prepare for. On March 27, Friedland, Grill, and the full 23-piece orchestra will come together to perform selections from Household Items at Club Oberon in Harvard Square. In addition to the music, a big screen will display accompanying artwork while dancers dance across the stage.

Enter to win tickets to see Trio Da Kali at The Villa Victoria Center of the Arts (Newton, MA) on April 10th. END_OF_DOCUMENT_TOKEN_TO_BE_REPLACED

END_OF_DOCUMENT_TOKEN_TO_BE_REPLACED

Enter to win tickets to Rhye at The Paradise on February 28th. END_OF_DOCUMENT_TOKEN_TO_BE_REPLACED

Enter to win a pair of tickets to attend The Hess Collection Seminar and Dinner as part of Boston Wine Festival 2018 at the Boston Harbor Hotel on Wednesday, March 14th. END_OF_DOCUMENT_TOKEN_TO_BE_REPLACED

Her new album has been pushed back, but we have Kimbra’s new single for you. END_OF_DOCUMENT_TOKEN_TO_BE_REPLACED

The folk duo returns with a new record this week. END_OF_DOCUMENT_TOKEN_TO_BE_REPLACED

Now that we’re done looking back at 2017, let’s look ahead at 2018. END_OF_DOCUMENT_TOKEN_TO_BE_REPLACED

Our first Song of the Week for 2018. END_OF_DOCUMENT_TOKEN_TO_BE_REPLACED