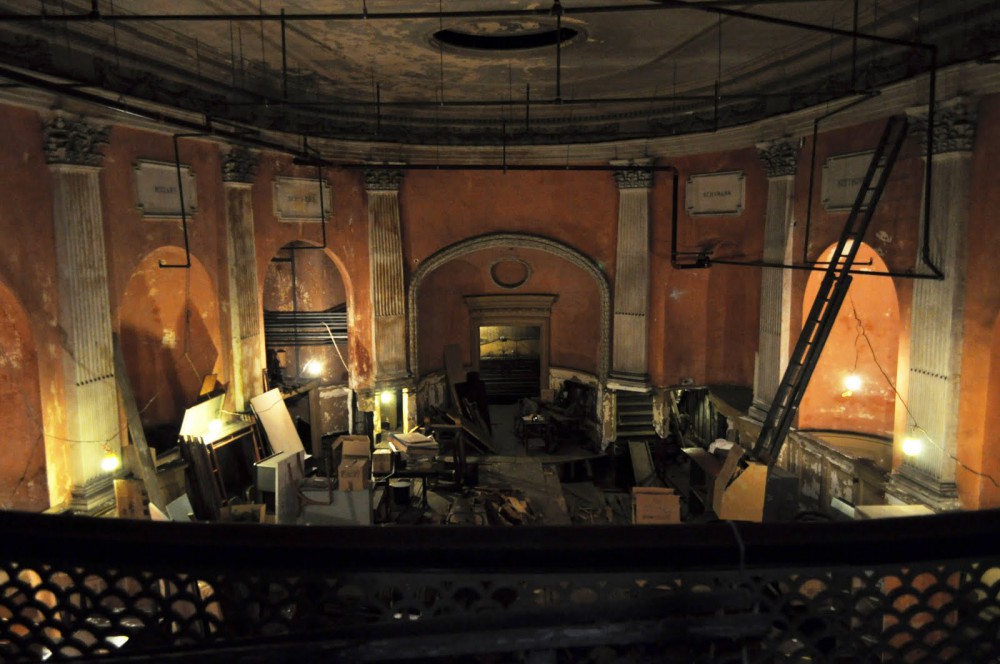 WECB reported last week about a secret underground theater beneath the M. Steinert & Sons piano store on Boylston Street on the Emerson campus. The theater, originally built in 1896 by one of Morris Steinert’s sons, is known by store employees as “Steinert Hall” and was once the center of Boston’s music scene, hosting recitals and opera performances, and later functioning as a recording studio. “Steinert Hall” was shut down almost 60 years ago because of updated building codes, but its structure and beauty still remain, even if only as a storage space for the piano store above it. (Check out more photos of the space from Grieg Lamont here.)

It’s much easier said than done, but with money, vision, the right approach to coding and licenses, and even more money, this beautiful space could once again become an enormous part of Boston’s community. Unfortunately, I don’t have the money or the knowledge, but I do have the vision. Here are 10 things that Steinert Hall could become.

Because Boston needs it.
There definitely aren’t enough of these.
This is probably the most logical move, seeing as how it was once a music hall and that’s why it was built.
Guy Fieri would love Boston.
Despite Boston’s rich and storied music culture, the city hasn’t always made it easy on its own musicians and performers. Entertainment, alcohol, even dancing licenses are expensive and required to make sure that people can actually have fun at concerts. It is for this reason that Boston’s music venues, while great for the most part, are too few. Multi-functional performance spaces are even fewer. Where in Boston can you go see concerts, dance performances, plays and musicals, comedy, poetry, visual art, zines, and any other form of art from the wide spectrum? Only in my dreams, I guess. It would be great if it didn’t stay there forever, though.
It could be one of those workout places where people can pay a ton of money for a membership and then never go. (All workout centers.)
The Orpheum is a quick walk up the street, a legendary theater that, in its own right, has been very poorly maintained. It’s wishful thinking, but a philanthropist with deep pockets and a soft spot for arts in Boston could make both theaters premiere hubs for performance in the city.
It’s clearly doing fine just collecting dust.
It seems fitting that for a theater situated under a piano store, located next to one of the world’s best music schools, and on the campus of one of the world’s premier performing arts schools, a performance space of any kind might see good use here.