8 boozy, chocolatey reasons to venture out this weekend 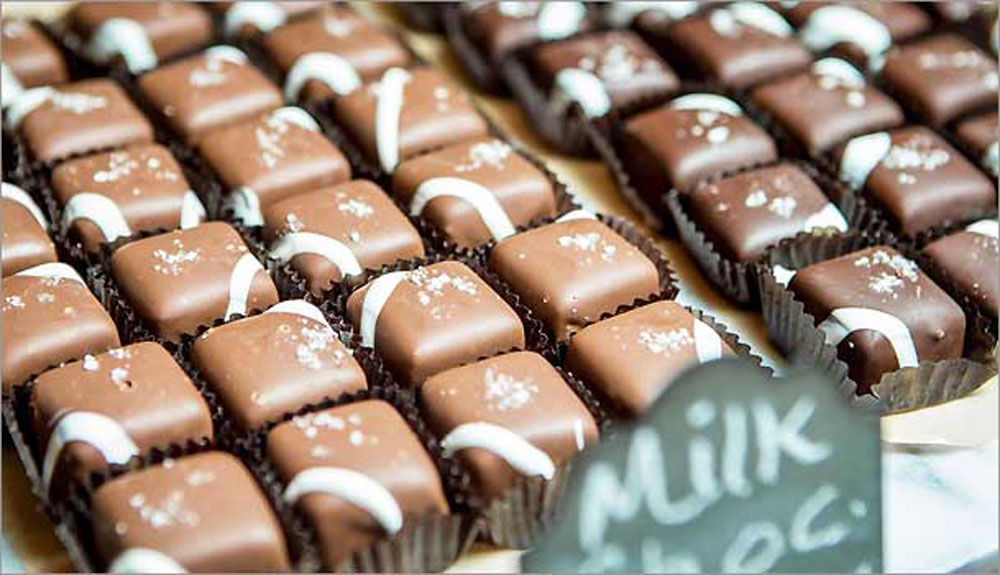 We don’t blame you for wanting to snuggle up on the couch, cue up some Netflix, and stay in all weekend. But just hypothetically, let’s say someone spots your doppelgänger committing a crime, then the cops ask where you were and all you can say is, “I was home. Alone.” We’ve all seen enough “SVU” marathons to know that’s pretty suspicious. Besides, there’s free alcohol and chocolate to be had. Go get some and avoid jail time in the process.

A panel of authors, historians, and bar owner Jerry Foley take you through the city’s “spirited” drinking history, from colonial taverns to Prohibition-era cocktails to craft beers to, um, Prohibition-era cocktails again. Admission includes a free drink, because who wants to listen to people talk about drinking for an hour without catching a buzz yourself? (7 p.m., $20, 21+)

Comedian Kurt Braunohler’s resume includes guest appearances on Adult Swim shows, a podcast on the Nerdist network, and a long-running variety show in NYC. Sure, but isn’t that true for pretty much every comedian these days? Well, does every comedian hold the world record for leading the most people in an all-meow version of Bill Withers’ “Lean on Me”? Didn’t think so. And because you were wondering: It’s 117 people. (7 p.m., $23, 21+)

On the night of Jan. 24, 1887, flames erupted from the iron foundry in South Boston. Before firemen could reach the fire, local resident Tommy MaGuire climbed a ladder to the roof and, as legend has it, “undertook to fight the flames with his fists.” Not only is this the most Southie thing that has ever happened, it also inspired GrandTen Distilling’s spicy Fire Puncher Vodka. Stop by its annual event at John Harvard’s to try some free samples and specialty cocktails. (7 p.m., FREE, 21+)

Performing Fusion Theatre presents two nights of short plays, which is nice for those of us with decimated attention spans who can’t sit through … hey, look a puppy making snow angels! Haha, he thinks he’s people. Where were we? Right: short plays, plus music, food and drinks, at the Center for Arts at the Armory. (7 p.m., $15, all ages)

Free chocolate! Live music! More free chocolate! Get over there before the Harvard kids find out about this and eat all your chocolate! They’re all rich and don’t believe in the redistribution of chocolate! (1 p.m., FREE, all ages)

Alloy Orchestra’s original live score accompanies the 1924 silent film “He Who Gets Slapped.” After a brilliant scientist loses his job and his wife, he joins the circus as a sad clown. That’s just how it was in the ‘20s: You suffered any kind of personal misfortune and it was off to the circus with you. Shot down by a girl? Sad clown. Missed a train? Sad clown. Stubbed your toe? Sad clown. (8 p.m., $25, rated PG-13 for sad clowns, probably)

Craft beer is so 2010. It’s all about craft spirits now. (Didn’t you read the “Drinking Boston” blurb?) Try more than 50 samples from local distillers at Pemberton Farms’ Winter Warmer festival, or probably not all of them, for your sake. Got drunk and puked in a snowbank? Sad clown. (4 p.m., FREE, 21+)

The nerd convention of your dreams at Club Oberon, featuring the geeky, sexy ladies of Rogue Burlesque. Hey baby, who’s your favorite Doctor? Tennant? Let me buy you a drink. Eccleston? Get away from me and put some clothes on. (8 p.m., $15-25, 18+)

—
This article was provided by our content partner, The Boston Calendar.

END_OF_DOCUMENT_TOKEN_TO_BE_REPLACED

Enter to win a pair of tickets to attend The Hess Collection Seminar and Dinner as part of Boston Wine Festival 2018 at the Boston Harbor Hotel on Wednesday, March 14th. END_OF_DOCUMENT_TOKEN_TO_BE_REPLACED

This year, the festival is welcoming more female wine producers than ever before, making up 20% of all winemakers that will be at the festival. END_OF_DOCUMENT_TOKEN_TO_BE_REPLACED

The holidays are here, so raise a glass. END_OF_DOCUMENT_TOKEN_TO_BE_REPLACED

I referred to it as the “best kept secret” in Boston arts for the holidays. END_OF_DOCUMENT_TOKEN_TO_BE_REPLACED

Boston’s arts scene shines at this time of year. END_OF_DOCUMENT_TOKEN_TO_BE_REPLACED

‘Tis the season to mix a nice, stiff drink. END_OF_DOCUMENT_TOKEN_TO_BE_REPLACED

It’s so much more than a holiday show. END_OF_DOCUMENT_TOKEN_TO_BE_REPLACED

Rock for a cause this holiday season. END_OF_DOCUMENT_TOKEN_TO_BE_REPLACED