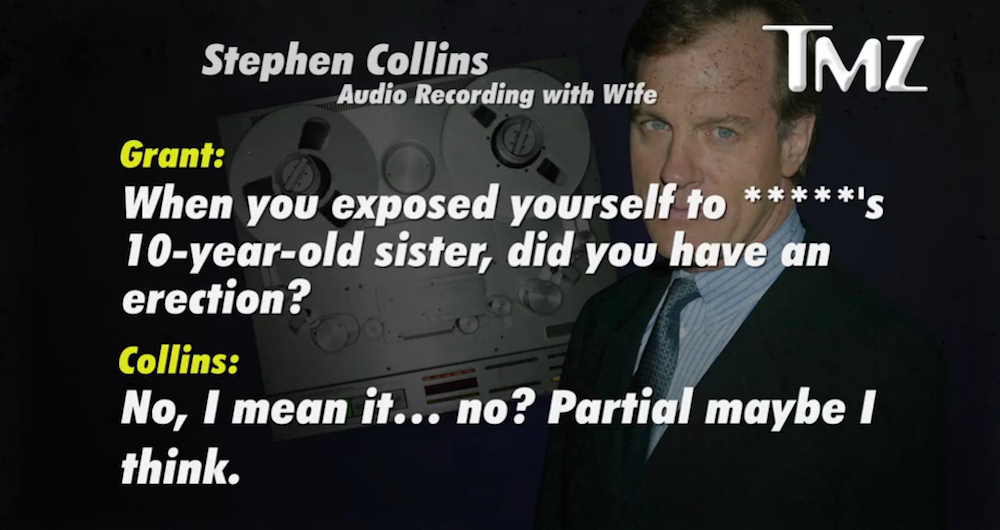 Well, this is horrifying. Stephen Collins, who played Reverend Eric Camden over the course of 11 seasons on the WB drama “7th Heaven,” appears to admit to molesting several underage children on a tape  secretly recorded during a therapy session by his wife Faye Grant and obtained by TMZ.

Though Collins discusses encounters with three different underage girls, the main one discussed on the tape is allegedly a relative of Collins’ first wife, Marjorie Weinman. Collins admits to inappropriately touching her several times between the ages of 11 and 13 while he lived in New York. “There was one moment of touching where her hand, I put her hand on my penis,” Collins says on the tape. When Grant asks whether Collins was erect when he put the victim’s hand on his penis, he replies, “No, I mean, no. Partial, maybe I think.”

While some have questioned the legality of a confession obtained via secret recording, Grant was advised by her lawyer that in this case, her actions would be legal. From TMZ:

Here’s what Collins didn’t know at the time. Grant taped the therapy session. We’re told her lawyer advised her it was legal to secretly record the conversation because in California you’re allowed to secretly record conversations to gather evidence the other person committed a violent felony … and molesting a child under the age of 14 qualifies.

According to TMZ, the NYPD currently has a copy of the tape, and are traveling to Los Angeles to interview Grant and further investigate. At least one of the victims lived near Collins and Grant in Los Angeles, and according to the NYPD, there are “at least three victims.”

Upon closer look at Collins’ Twitter page, it appears that Stephen Collins is slated to have a role in the upcoming “Ted 2” film from Seth MacFarlane. “Ted 2” has been filming in Boston all summer and will hit theaters in 2015. Collins’ Twitter does not confirm what role he will play in the movie, and no word has been released as to whether or not he will still appear in the film given this situation.

About 2start Ted2! RT @KcCarbente: @StephenCollins what are you up to? Miss seeing those blue eyes & beautiful face on the tv screen

I’d tell you but @SethMacFarlane would have to kill me. RT @Rene_Auer: @StephenCollins What is your role in TED 2 ?

Always a pleasure to have Boston.com’s Perry Eaton in studio for a chat. After we talked a bit about Pearl Jam at Fenway and Perry’s new podcast, he filled us in on Game of Thrones live and Narragansett’s new Bananagrams-themed brew. END_OF_DOCUMENT_TOKEN_TO_BE_REPLACED

No, not from afar, from the comfort of her couch. From the actual awards themselves. That’s where Meredith Goldstein was for the Oscars. She shared all the juicy, first-hand details with me. END_OF_DOCUMENT_TOKEN_TO_BE_REPLACED

It was wonderful having our good friend Meredith Goldstein back in studio this morning. She dug into the latest edition of Love Letters, which prompted us to play this song. And of course we had to discuss the Oscars. Make sure you’re following Meredith on Twitter, as she’ll be live-tweeting the awards this Sunday night. END_OF_DOCUMENT_TOKEN_TO_BE_REPLACED

Our first edition of TV Sets for 2016 might be better than every edition from 2015. END_OF_DOCUMENT_TOKEN_TO_BE_REPLACED