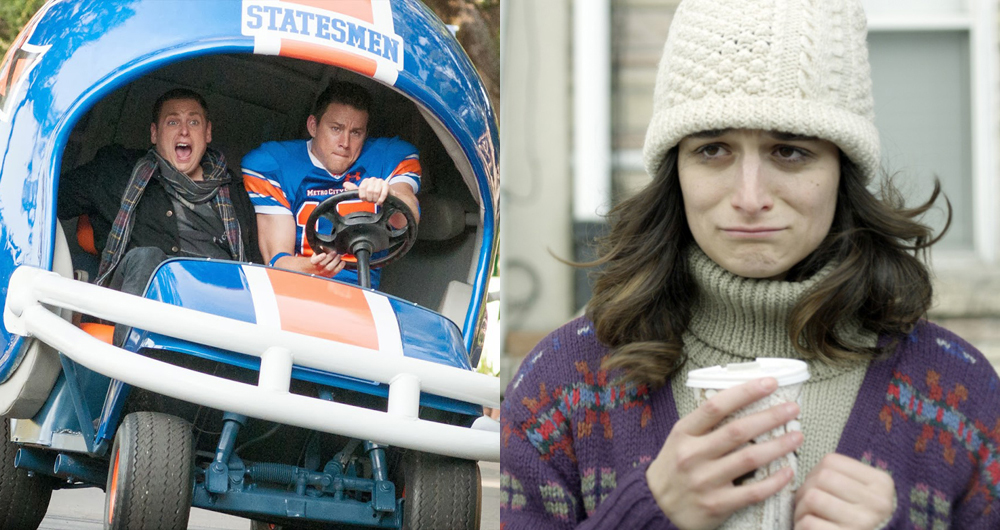 One of the quintessential parts of summer that doesn’t involve sweat, sunburns, or too much booze is the classic summer movie. There’s nothing like seeking shelter in a theatre during the oppressive heat, especially when there are some awesome flicks to help make it count. Here are this summer’s releases that we’re most excited for, as well as the perfect scenario in which to view them.

How to Watch: Best to see after a long, shitty day of work

Why it Shouldn’t Suck: It’s a film festival darling

The Gist: The film’s lovable lead character is an aspiring comedian, Donna Stern (Jenny Slate), who finds her real life a lot less funny than her unapologetic, but relatable on-stage humor. Donna faces an uncertain future when she finds herself dumped, jobless and pregnant just in time for Valentine’s Day. The film perfectly blends comedy and humanity in its every awkward moment.

Release date: June 6, 2014
How to Watch: Best to enjoy with your buds while drinking some suds.

Why it Shouldn’t Suck: Directors Phil Lord & Chris Miller as well as the bromance between Jonah Hill & Channing Tatum

The Gist: “22 Jump Street” not only reunites co-stars Jonah Hill and Channing Tatum for another fun packed bromance adventure, the film also brings back together uber box office masters and zany directing team from “21 Jump Street” and “Lego Movie,” Phil Lord and Chris Miller. Pair those guys with the original hilarious “21 Jump Street” writer, and “22 Jump Street” is definitely one crude comedy to enjoy with your drinking buddies. For this go-around, the boys have now graduated from high school undercover work to a similar role as college freshmen. As they try to crack another case, their partnership is put to the test.

Release date: June 13, 2014
How to Watch: Best to rock in your superman underwear, while dreaming you are a real-life superhero

Why it Shouldn’t Suck: Simply– it’s the Wachowskis (I mean, come on).

The Gist: From the famous twosome, Lana and Andy Wachowski, who brought the world the ass-kicking, visually stunning “Matrix” Trilogy, comes their latest creation. The two also enlist the help of the award-winning producer, Grant Hill, who collaborated with them on the “Matrix.” For this science fiction adventure through the cosmos, Mila Kunis plays Jupiter Jones, who only realizes her destiny for greatness when Caine (Channing Tatum), a genetically engineered hunter, tracks her down to help her face the fate she was always destined for.

Why it Shouldn’t Suck: “Happy Christmas” was the first film to land a distribution deal at Sundance this year.

The Gist: This indie flick centers around the irresponsible Jenny (Anna Kendrick), who unexpectedly moves in with her older brother Jeff, and his wife Kelly, as well as their two-year-old son.  Jenny’s arrival shakes up their domestic bliss, especially when she and her friend instigate an evolution in Kelly’s life and career.

Why it Shouldn’t Suck: Tate Taylor and Chadwick Boseman

The Gist: Okay, apart from a Disney musical, if you want awesome music you can dance to in a movie, then check out “Get On Up.” This movie definitely won’t disappoint, with “The Help’s” Tate Taylor directing and “42’s” Chadwick Boseman playing the lead. Chadwick takes on and embodies the late great James Brown in the incredible life story of the Godfather of Soul.

Release date: August 1, 2014
How to Watch: Best movie for a first date

The Gist: From Marvel‘s Cinematic Universe, the studio that brought you the likes of “Iron Man,” “Thor,” “Captain America” and “The Avengers” franchises, comes a new live action comic, the “Guardians of the Galaxy.” This time around, Marvel is mixing up their big budget. over-the-top, action-packed epic adventure, by making it a comedy. “Iron Man” was funny at times, but he’s nothing like this band of misfits. Scary to think these heroes are the best chance we have in the galaxy.

Release date: August 1, 2014
How to Watch: When you’re looking for a movie that won’t disappoint.

Why it Shouldn’t Suck: Really, you have to ask?

The Gist: “Sin City” is back! And if you a fan of the original “Sin City,” you’re in for a treat because original co-directors Robert Rodriguez and Frank Miller reunite to bring Miller’s visually stunning “Sin City: A Day to Kill For” to the big screen. For this new tale, classic favorites return (AKA Mickey Rourke and Jessica Alba) and new characters emerge.