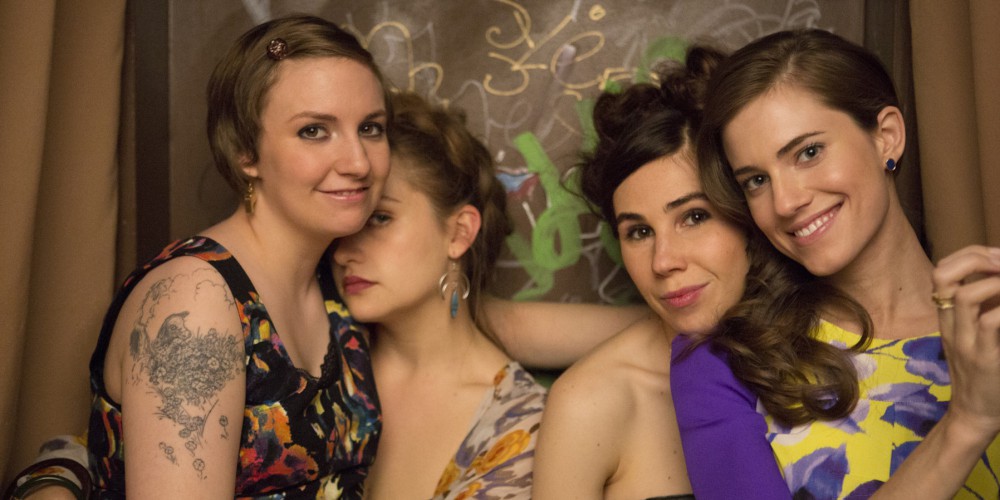 Birthday Bitch Hannah (writer/star Lena Dunham) celebrated with her ‘rents and a dubious rendition of a classic from “Rent” on her 25th birthday in this week’s episode of  “Girls.”

I love Dunham’s writing. Her #realtalk is what makes me a sucker for what is essentially a sitcom about over-privileged, 20-something white women living the life I grew out of approximately 24 months ago. With this in mind, here at BDCwire, I’m going to highlight the best of the best writing in my weekly updates.

This week’s best lines were:

We see Ray growing into his managerial future, taking control of the coffee shop, Grumpy’s. The actual owner of the joint, dying of some mysterious illness, is giving Ray advice about how to be a good boss. (Like, “Don’t schtupp anyone.”) It’s obvious Ray is taking Soshanna’s parting words to heart and he’s working hard to prove he can be a responsible grown up. He obviously still loves her and heartbreakingly tells her about his work later in the episode. But it’s great to see Ray with someone to look up to. He’s the only character that has a badly-needed mentor, and we see how much good it does him. If only the others could be mature enough to listen to this kind of sage advice.

“I love this party, the last thing I want to do is sing anything from ‘Rent’.”

I love this party, the last thing I want to do is sing anything from Rent. #girls

It’s Hannah’s party, so it’s obviously Marnie’s limelight. Reminiscing on a previous birthday of Hannah’s when the two best friends did what was likely a terrible rendition of the lesbian love song “Take Me or Leave Me” from “Rent,” Marnie demands they sing together once more. Hannah is less than enthused at the prospect, but allows Marnie to cajole her onto the stage only to play the part of sidekick to Marnie’s ongoing train-wreck of a life. She’s still wallowing in her post-Charlie despair, but seems insistent on forcing people to participate in her elaborate “I swear, I’m OK!” charade.

“Why does any guy come to a place where there’s dancing? A girl told me to.”

Why does any guy come to a place where there’s dancing? A girl told me to.

Aww, poor Ray. He meets a cool bro at the bar, they start chatting the way bros do, and it turns out the cool bro was invited by none other than Shoshanna the now-pot-smoking (?) promiscuous ex. Shosh has become the least affected and most adventurous, possibly taking all the most fun parts of the other girls’ personalities. She’s got Marnie’s sense of fabulous style (better hair this week), Hannah’s charming neurotics, and now apparently Jessa’s casual drug habit. But also this quote is generally sad because in the larger scheme than the characters’ lives, this show is a realistic take on life in your mid-20s in 2013. Really, what is it with boys not wanting to dance? Get it together, people – none of us actually care what you look like, dancing is just fun. Not dancing does not make you cool. Stop being a dick.

“She doesn’t even have the common courtesy to implode alone.”

She doesn’t even have the common courtesy to implode alone. #girls

Enter Caroline, Adam’s sister (referenced back in the first season and never heard from again), played by the glorious and quintessential Millennial child star-turned-recluse-turned-indie-darling, Dunham’s friend Gaby Hoffman (“Sleepless in Seattle,” “All I Wanna Do,” “Field of Dreams,” “Uncle Buck,” etc.). Amazing performance, absolutely incredible pubic hair. She’s part banshee, part Mr. Rochester’s wife, and she makes Jessa’s crazy look quaint by comparison. When she breaks a glass in her hand in one squeeze, Caroline instantly becomes the perfect foil to Hannah’s newfound sanity. It’s like she came into Hannah’s life just to say, “Oh, you think you’re nuts? Ha, that’s adorable.” Looking forward to much more from Hoffman. This part could propel her into the grown-up casting chair and thank God! I’ve missed her!

The best part of your 20s is amassing a lot of interesting, if short-term, friends. Hannah’s e-book editor, David, is one of these. He’s clearly a coked out bitch, but whatever, he’s dancing, he’s publishing her book, and he can beat the hell out of Ray, which was a little impressive. David asks for a smartphone upon arrival (presumably his is dead or missing) and promptly downloads Grindr, the world’s premier gay hookup app, filling the stereotype void left by Elijah, the show’s only other gay character.

Non-quote from Jessa. Finally! She didn’t have a single hurtful, douche-y thing to say. A welcome break, to be sure.

“It’s definitely my genetic material.” Adam, on the tooth hanging from Hannah’s birthday present, a necklace. It’s either his or Caroline’s, he says. His mother kept them all in the same box.

I’ll be blogging here every week, dissecting each new episode. Leave a comment or send your rage tweets to @lexikon1.

Always a pleasure to have Boston.com’s Perry Eaton in studio for a chat. After we talked a bit about Pearl Jam at Fenway and Perry’s new podcast, he filled us in on Game of Thrones live and Narragansett’s new Bananagrams-themed brew. END_OF_DOCUMENT_TOKEN_TO_BE_REPLACED

No, not from afar, from the comfort of her couch. From the actual awards themselves. That’s where Meredith Goldstein was for the Oscars. She shared all the juicy, first-hand details with me. END_OF_DOCUMENT_TOKEN_TO_BE_REPLACED

It was wonderful having our good friend Meredith Goldstein back in studio this morning. She dug into the latest edition of Love Letters, which prompted us to play this song. And of course we had to discuss the Oscars. Make sure you’re following Meredith on Twitter, as she’ll be live-tweeting the awards this Sunday night. END_OF_DOCUMENT_TOKEN_TO_BE_REPLACED

Our first edition of TV Sets for 2016 might be better than every edition from 2015. END_OF_DOCUMENT_TOKEN_TO_BE_REPLACED