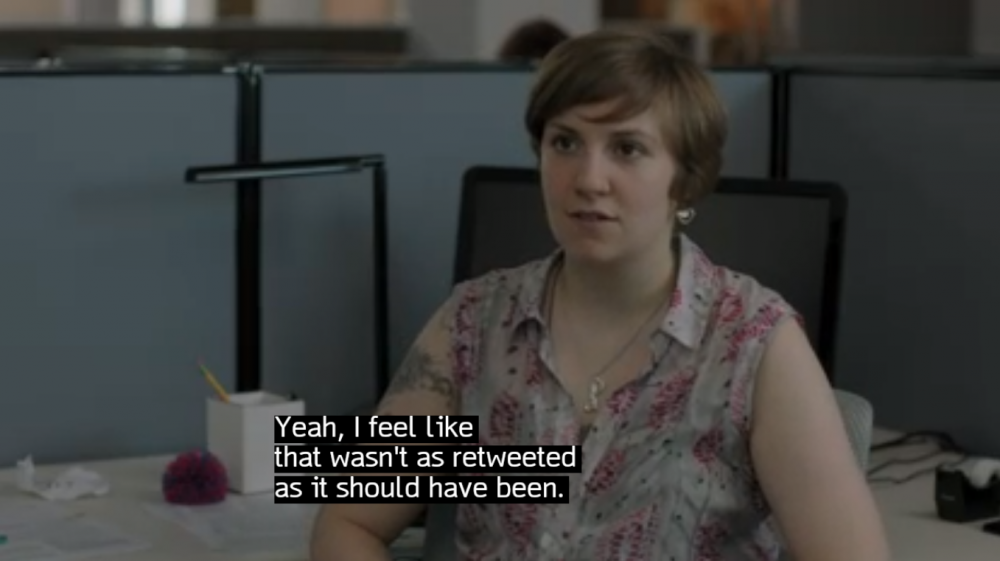 The season’s sixth episode centers around Hannah beginning what’s sure to be a short-lived career as a cubicle rat at GQ magazine. She’s working in a four-person brainstorm group that includes Jessica Williams from “The Daily Show” and two other post-idealistic schlubs who used to be writers.

In his usual completely accurate characterization of anything the girls are doing, Ray points out the “morally and creatively bankrupt” nature of a section in GQ called the “Field Guide to the Urban Man” (sponsored by Neiman Marcus). Hannah, as usual, needs to learn by doing and won’t listen to reason. So she optimistically skips into the office, and by the end of the day is crying after learning these five truths of post-college degree-in-creative-writing self-sufficiency.

1. People who are actual staff writers at literary institutions are really fucking uppity and snobby about advertising and corporate communications. For no reason. As Hannah’s new friend Joe points out, “We’re all here selling our souls.”

2. Free snacks are one of the top 10 reasons people get trapped in corporate jobs. Free Sun Chips and Honest Tea are the reason writers will tweet for Nike for a living for years.

3. When you work all day at a real job, your brain fails and you never get your extracurricular writing done. You find yourself often falling asleep on your Macbook and having to explain to the people at the Genius Bar that your space bar stopped working because it’s covered in drool.

4. Your bosses do not give a shit. A million people would kill for your menial, degrading, waste-of-time job. You are not special. No one cares that you were the editor of your Ivy League literary magazine. Now you’re just another office drone, and the most creative freedom you can reasonably expect is pastel-colored post-its.

5. Not everyone will always think you are adorable. Even when you agree that “fedoras are worse than genocide.” Interrupt new co-workers when they are having lame ideas and prepare to suffer the backlash for your “rapid-fire mind pace.”

It’s not all about Hannah, though. (Don’t tell her.) The other three girls are equally unprepared for their lives.

Marnie and Ray are hanging out and have weird and uncomfortable sex.

“Would you mind putting it back in?”

Jessa is working at a baby clothing store and, unsurprisingly, being a douche.

[To a woman who asks if the newborn-sized outfit she’s holding is too small for a one-year old] “Not if your baby is morbidly obese, in which case, I can’t help you.”

Shoshana is trying to decide which of her fuck buddies will be the best boyfriend. She is disappointed in all of them.

Always a pleasure to have Boston.com’s Perry Eaton in studio for a chat. After we talked a bit about Pearl Jam at Fenway and Perry’s new podcast, he filled us in on Game of Thrones live and Narragansett’s new Bananagrams-themed brew. END_OF_DOCUMENT_TOKEN_TO_BE_REPLACED

No, not from afar, from the comfort of her couch. From the actual awards themselves. That’s where Meredith Goldstein was for the Oscars. She shared all the juicy, first-hand details with me. END_OF_DOCUMENT_TOKEN_TO_BE_REPLACED

It was wonderful having our good friend Meredith Goldstein back in studio this morning. She dug into the latest edition of Love Letters, which prompted us to play this song. And of course we had to discuss the Oscars. Make sure you’re following Meredith on Twitter, as she’ll be live-tweeting the awards this Sunday night. END_OF_DOCUMENT_TOKEN_TO_BE_REPLACED

Our first edition of TV Sets for 2016 might be better than every edition from 2015. END_OF_DOCUMENT_TOKEN_TO_BE_REPLACED