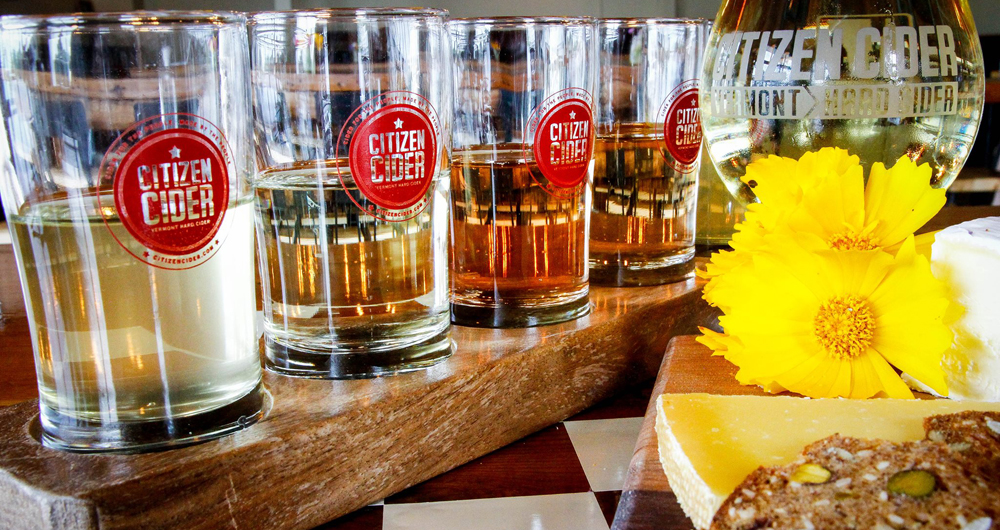 Drink Craft Beer makes its triumphant return to Space 57 in downtown Boston this weekend for its third annual Fall to Winter Fest – a who’s-who when it comes to this season’s local beer and, especially this time through, cider.

The mantra Drink Craft Beer has evolved since Jeff Wharton and Devon Regan first started the group in 2006. Now it encompasses more than just beer, which is why it shouldn’t be surprising that there’s a slew of ciders on tap at this weekend’s fest. Eight cider makers are set to pour 23 different ciders to be exact.

Hell, even hardcore cider nerds that may have missed CiderDays, a festival that celebrates all things apple out in Franklin County each fall, may want to clear their schedules for this weekend’s fest.

“Honestly, it wasn’t on purpose in that we wanted to get all types of cider at the fest,” Jeff Wharton, one of Drink Craft Beer’s founders told me this week, “What we wanted to do was to get a bunch of great cider makers in one spot and it just so happened that they’re quite diversified in what they make.”

Wharton is right. The cider being poured this weekend – ranging from the super dry, to tart, and even funky – couldn’t be further from the mass-produced ciders like Strongbow and Angry Orchard that litter grocery store coolers.

Not sure what to try? Here’s five can’t-miss local ciders being poured at this weekend’s fest:

While skimming the list for FTW Fest I had to do a double take when I scrolled past Artifact Cider. I had never even heard of this tiny, two-man project. Much like how this year’s Summerfest was High Horse Brewing’s coming out party, 2014’s Fall to Winter Fest could just be another Western Mass. outfit’s: Artifact’s.

Artifact makes their cider at Gasoline Alley, an incubator that Jake Mazar, one of Artifact’s owners who co-founded Artifact with Soham Bhatt, calls a “funky little spot” in Springfield. Mazar is set to pour their flagship-of-sorts, New World, this weekend. It’s a cider that’s made from mainly American heirloom apples: Baldwin, Russet, Northern Spy, etc. Like a lot of ciders at the fest, New World is going to be pleasantly dry but it’s their latest offering, Wild Thing, that you’re going to want to seek out. The name is a little deceiving— it’s not a funky cider, it’s more of a dessert cider made from traditional apples. Think McIntosh. Mazar says the cider won’t technically be released until 11/22, but folks who go tonight and tomorrow will be able to get a special sneak peek of the lightly hopped nectar.

Can’t make the fest? Try hunting down some Artifact at Albert’s Market, a fairly tiny convenience store/liquor store on Cambridge St., up the road from the Lechmere MBTA stop. It’s the only spot cider drinkers will be able to find it in the city… or really, East of I-91.

FAR FROM THE TREE – Spice

A lot like Bantam did this year with The Americain, a cider made with rose petals, green cardamom, coriander, cloves and cinnamon, Far From the Tree, a cidermaking duo from Salem, embrace the spirit of the spice rack with their new seasonal: Spice. Its origin story is a long one though, so bear with me: Spice is based on a local cookie named after a freed slave and revolutionary war veteran (Joe Frogger—look it up, the story checks out) who at one point, owned a tavern in Marblehead. Lore has it, the cookies were made with molasses and seawater, something that made it so they could be transported long distances, like from Salem to Indonesia. The cider is more or less a tribute to those cookies. It’s made with molasses and sea salt from Marblehead Salt Company and here’s where the spices come in: It’s also made with fresh ginger, nutmeg, allspice and cloves to boot. Far From The Tree impressed at the last Drink Craft Beer Fest. To say I’m looking forward to their latest offering would be an understatement.

Spice officially lands at liquor stores November 21 but if you can’t find it, make a point to head to one of Salem’s Winter Farmer’s Markets—Far From The Tree is expected to make a handful of appearances there (with bottles of Spice in tow) throughout the season.

Post by Far From The Tree Craft Hard Cider.

I’ll cop to being a casual cider drinker at best – but while perusing the shelves at Redstone Liquors in Stoneham recently, I was excited to stumble upon a few bottles from Shacksbury, a small cider manufacturer from Shoreham, VT.

Shacksbury bottles are solid, elegant vessels, adorned with labels that showcase the cider’s sleek, modern, swooping logo. It’s no coincidence that the bottles resemble wine bottles. The cider wouldn’t look out of place at the center of a table this Thanksgiving. What’s inside the bottle shares a few similarities with wine, too.

“We very consciously wanted to create complex, dry, food friendly ciders,” David Dolginow, one of Shacksbury’s owners told me this week, “It’s the reason that we got into the business.”

Shacksbury insists on using traditional cider apples and since they’re hard to come by in the U.S., three of its four initial offerings – at least for the time being – source apples from England and Spain. The ciders are nuanced and its recipes are rooted in history, even if that means they take a little longer than normal ciders to ferment.

“Most cider makers, craft and industrial, will blast through fermentations with robust cultured yeasts in a week or two,” Dolginow says, “On the other hand, our ciders go through a slow, cool fermentation and aging process, nearly a year in total.”

While all of Shacksbury’s ciders are different it’s the Classic that Dolginow expects to win drinkers over. Classic dials down the tannins, has a touch of sweetness and a “really cool nice ripe apple note to it,” according to Dolginow. Of all the ciders on tap this weekend, this may pair the best with food. Make sure to save something from Mei Mei, who will be serving food tonight and tomorrow, for this one.

Our #LostAppleProject is well underway for 2014. These apples are fresh picked and 'sweating' to let the sugars fully develop before we grind, press, and begin to ferment them.

The line at this past summer’s Drink Craft Beer Fest told you everything you needed to know about Burlington, Vermont’s Citizen Cider. The hype is worth the wait. On a recent trip to BTV, Citizen’s cider was damn near ubiquitous. Their logo, a lot like Bissell Brothers’ and Oxbow’s are in Portland now, was everywhere.

Bar patrons consume Citizen – usually their flagship Unified Press – by the tallboy in Vermont. If fest goers haven’t tried it yet they should make a point to try either that or better yet, The Dirty Mayor, a sharp and zippy cider made with ginger and lemon.

Citizen has slowly started to distribute in Massachusetts. Unified Press cans are still hard to come by but some of their other offerings, including 22 oz. bottles of its hefeweizen/cider hybrid, Wit’s Up, can still be found at finer beer stores. Don’t expect to find Dirty Mayor outside of Vermont anytime soon though.

Charlestown’s Downeast Cider House, a group of Maine transplants, has the privilege of pouring a cider that for all intents and purposes will be the festival’s marquee beverage this weekend. According to Wharton, Drink Craft Beer crowdsourced fans’ ideas for the cider and narrowed down the ingredients for it a few months ago.

Tyler Mosher, one of Downeast’s founders, described what went into making the cider. First things first: He roasted pecans smothered in brown sugar and maple syrup on his stove. “Delicious to eat!” he adds. Then they added the candied pecans to a dry cider and aged it for three weeks. After 86ing the pecans they added vanilla beans, let that sit for two weeks and lastly, added a tiny bit of maple syrup to round off the finish. Cider fans can taste the autumn-sounding result this weekend.

Downeast won’t have Winter Blend – its new seasonal cider aged on toasted oak chips with cinnamon and nutmeg – ready for the fest but fret not, they’re hoping to can it in the next two to three weeks according to Mosher. In lieu of Winter Blend fans can look for Oak Sour, a cider that was fermented over the summer with wild yeasts, then spiked with oak chips.

Fall to Winter Fest here we come, five kegs of the… Read the keg collar. @drinkcraftbeer

END_OF_DOCUMENT_TOKEN_TO_BE_REPLACED

Enter to win a pair of tickets to attend The Hess Collection Seminar and Dinner as part of Boston Wine Festival 2018 at the Boston Harbor Hotel on Wednesday, March 14th. END_OF_DOCUMENT_TOKEN_TO_BE_REPLACED

This year, the festival is welcoming more female wine producers than ever before, making up 20% of all winemakers that will be at the festival. END_OF_DOCUMENT_TOKEN_TO_BE_REPLACED

The holidays are here, so raise a glass. END_OF_DOCUMENT_TOKEN_TO_BE_REPLACED

I referred to it as the “best kept secret” in Boston arts for the holidays. END_OF_DOCUMENT_TOKEN_TO_BE_REPLACED

Boston’s arts scene shines at this time of year. END_OF_DOCUMENT_TOKEN_TO_BE_REPLACED

‘Tis the season to mix a nice, stiff drink. END_OF_DOCUMENT_TOKEN_TO_BE_REPLACED

It’s so much more than a holiday show. END_OF_DOCUMENT_TOKEN_TO_BE_REPLACED

Rock for a cause this holiday season. END_OF_DOCUMENT_TOKEN_TO_BE_REPLACED

Get out and see a show this holiday season, and save some money when you do. END_OF_DOCUMENT_TOKEN_TO_BE_REPLACED