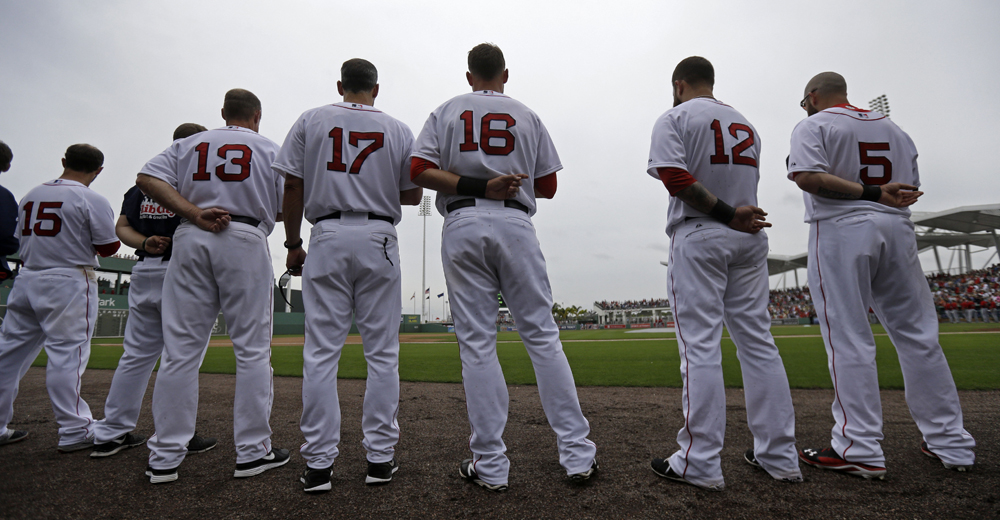 Opening Day, 2014. The Red Sox championship defense starts today. We made it. I’m pretty pumped, in case you hadn’t figured that out already. So to celebrate the glory of today, here are five foolproof predictions for the Sox season.

(Note: We’ll find out over the course of the next six months but when it comes to my predictions, there’s usually a very fine line between foolproof and just foolish. Anyway, let’s get on with it).

1. Jackie Bradley Jr. will play at least 100 games for the Sox

Thankfully, last week’s narrative revolving around what an egregious mistake it would be for the Sox to award Grady Sizemore the Opening Day center field spot over Bradley, as if Bradley is on some sort of scholarship and will be ruined for the rest of his career by starting the season at Triple-A, came from only a few, albeit very loud, corners. Now, with news breaking over the weekend that right fielder Shane Victorino is already injured, it seems that Bradley will remain with the big club to start the season, surely to the delight of those who campaigned for him to beat out Sizemore, despite the veteran decidedly winning the competition in spring training.

Victorino, of course, is a very good player and was a crucial piece in last season’s title run. But, as we saw on several occasions, he’s fragile, in no small part due to his balls-out style of play. Between Victorino’s frequent nagging injuries and Sizemore’s health being something of a timebomb, Bradley will spend plenty of time with the Sox, thereby rendering any and all faux outrage over his losing the center field job to Sizemore completely moot. What a surprise.

2. Jon Lester will sign a contract extension during the season

Lester, the unquestioned ace of the Sox pitching staff, will be a free agent after the season. Despite negotiations to extend his contract going on throughout the spring, the two sides have thus far been unable to come to an agreement, and on Saturday, announced that they’ve “hit the pause button” on talks. Lester, who has voiced a desire to remain in Boston and even take a hometown discount to do so, has said all the right things since the discussions were tabled, as has Sox GM Ben Cherington. Perhaps most noteworthy in regard to these developments though, is what hasn’t been said.

Neither side has mentioned a thing that would suggest talks will not resume until after the season. If that’s indeed the case, and the door remains open, it’s worth noting that Lester shares agents with Sox second baseman Dustin Pedroia, who (DING DING DING!!!) agreed to a long term contract extension during the season last year. In other words, by the All-Star break at the absolute latest, Jon Lester will have a brand spanking new contract with the Boston Red Sox.

3. Will Middlebrooks is in his last season as a Red Sox

Middlebrooks, now a proud wearer of contact lenses, got off to a good start in trying to put his lousy 2013 behind him down in Fort Myers, hitting .353 with four homers, nine RBI and a 1.056 OPS with just three Ks in 51 at-bats, and told The Boston Globe’s Dan Shaughnessy, “This spring, I feel locked in every time I step on the field.” This sounds like a reason for optimism and hopefully it carries over into the regular season. Because if Middlebrooks falters again the way he did in 2013, the Sox won’t have as easy a time replacing him at third base as they did last year, when first Jose Iglesias and then Xander Bogaerts took turns shining at the hot corner in his stead. Whether this is just a spring time fluke or not, and Middlebrooks takes the next step both as a consistent, productive offensive player and a solid defensive third baseman, it feels like the writing in regard to his future with the Sox is on the wall.

Two of the organization’s better prospects, Garin Cecchini and Deven Marrero, play on the left side of the infield. Cecchini will begin the year playing third in Pawtucket and is regarded as “one of the most polished hitters in the Red Sox system.”  Marrero didn’t have a great season at the plate in the minors last year but has drawn comparisons to Iglesias as a defensive wizard at shortstop. And of course, there’s Bogaerts, who has already shown himself capable of playing third at the big league level, and at 21, may wind up filling out to the point that he’s too big to spend his entire career at short. Add to all of this the fact that Mike Napoli is ensconced at first base for the next two years, making it difficult to move Middlebrooks across the diamond before 2016 should Cecchini continue his speedy progression, and someone may have to be the odd man out.

That someone will be Middlebrooks, who could well be dealt during the year if he struggles in any way like he did last year, but won’t wind up lasting through next winter. The Sox have other, more dynamic options than Middlebrooks who are either already here or on the verge of being ready. He’s not long for Boston.

4. Dustin Pedroia will be an MVP candidate

Pedroia suffered a torn ligament in his left thumb on Opening Day year which required off-season surgery. He still managed to play in 160 games, leads the majors in plate appearances with 724, rip off 193 hits, score 91 runs while driving in 84 and post an OPS of .787 and an OPS+ of 116 all while batting third for the first time in his career and winning his third Gold Glove at second base. Deep breath.

The point, of course, is that Pedroia, who already has one MVP trophy to go with his Rookie of the Year award and two World Series rings, put up his typical numbers despite the injury. Now, imagine what those numbers would have looked like sans torn thumb ligament. His power was down slightly (nine homers, his fewest since hitting eight during that Rookie of the Year campaign), which can be directly attributed to the injury. So take that injury out of the equation and you can probably add another five to 10 dingers to his total, which then ups the number of RBI, the slugging percentage and the OPS and OPS+. All of that plus the stellar defense on a contending team? Sounds like an MVP candidate to me.

5. The Sox will win the AL East but lose in the Division Series

All of the Globe’s baseball writers have the Tampa Bay Rays winning the American League East but I just don’t see it. The Rays are still a middle of the pack offensive team and even though their pitching is arguably the class of the entire AL, you still have to score to win in the regular season and the Sox are well positioned to at least approach their 2013 output, which was good enough to lead the majors in runs. Come playoff time, however, the Sox are going to run out of gas. After 178 games played last season and another 162 coming up, the Sox will be eliminated post haste in Round 1. Other than the fact that they won’t be forced to start the likes of Matt Clement in Game 1 of the Division Series, I can see the postseason playing out a lot like it did in 2005, when they were swept by the eventual World Champion Chicago White Sox in the Division Series, the weight of defending their ’04 title finally becoming too much to bear.

Also, as good as the Sox were last year, they were almost just as lucky in that none of their injuries really hurt them. The rotation held up despite Clay Buchholz’s long absence, the bullpen remained a major strength despite losing multiple key parts thanks to the emergence of Koji Uehara and Junichi Tazawa and the only regular position players to miss more than 30 games were Victorino and Stephen Drew. But Koji pitched nearly 21 more innings than he previously had EVER, and he’s turns 39 on Thursday. Napoli’s 544 at-bats and 630 plate appearances were both career highs. And at this point, everyone who has spent just five minutes on anything Sox-related knows of Sizemore’s injury history, not to mention Victorino’s, Buchholz’s and Jake Peavy’s. It’s tough to imagine the same kind of good fortune shining down on Fenway Park all season long.

Yet they will still have enough to win the AL East. Fifty-seven of those division games are against the Yankees, Orioles and Blue Jays, all of whom remain inferior to the Sox either at the plate, on the mound or in the field (you could make the argument that the Sox are superior to both the Yankees and the Blue Jays in all three of those areas but man, this is already verbose enough).

It may not end in the same sort of elation as last season did, but 2014 will still wind up another ton of fun at Fenway. First pitch at 3.

END_OF_DOCUMENT_TOKEN_TO_BE_REPLACED

Eric Wilbur had quite the story to tell. END_OF_DOCUMENT_TOKEN_TO_BE_REPLACED

Winding down 2017 in sports. END_OF_DOCUMENT_TOKEN_TO_BE_REPLACED

Chad Finn has some thoughts. END_OF_DOCUMENT_TOKEN_TO_BE_REPLACED

The saddest onside kick ever? END_OF_DOCUMENT_TOKEN_TO_BE_REPLACED

Feel the heat yet? Neither do we. END_OF_DOCUMENT_TOKEN_TO_BE_REPLACED

The Red Sox legend is dead at 99. END_OF_DOCUMENT_TOKEN_TO_BE_REPLACED