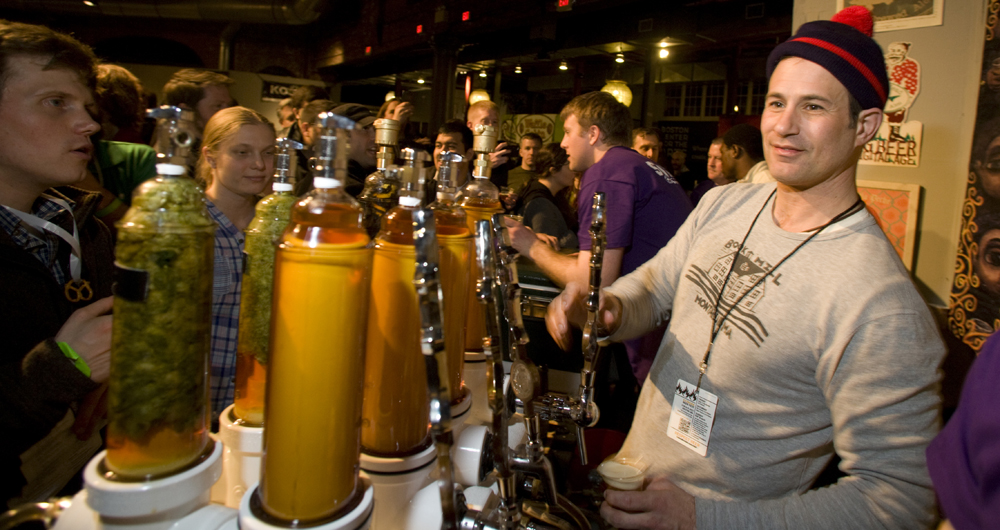 BeerAdvocate’s 11th annual Extreme Beer Fest takes place downtown at the Seaport World Trade Center this weekend, and that means brewers from all over the country will soon be descending on our fair town, toting kegs of delicious brews that are rarely – if ever – on tap in Boston.

It makes for a lot of beer; 250+ different kinds actually. There will be eisbocks, goses, and zwickelbiers, there will be beers that are brewed to taste like French toast, s’mores, and carrot cake. There will even a beer brewed with pig heads and bones – vegans may want to avoid that one – you name it, if it’s a bizarre, off-the-beaten-path style of beer; it’s likely the Alström brothers have corralled it here this weekend.

Last year, the fest had to reschedule after winter storm Nemo tightened its icy clutch on Boston and shut down the city’s transportation. While the fest was only bumped back a month, many of the brewers (and attendees) couldn’t manage to book a second trip to Boston, meaning all parties involved are probably looking forward to a do-over.

Regardless, this is a weekend beer nerds have long since circled on their calendars. They’ll be there this weekend, braving long lines[i] for a 2 oz. sample of Founders Brewing Company’s KBS, a luscious bourbon barrel coffee stout and The Bruery’s Chocolate Rain, a decadent (and mighty boozy at 19.50% ABV) cocoa stout. Both beers carry “world-class” 100 ratings on BeerAdvocate and ‘tickers,’ the voracious sect of craft beer fans who are determined to check off as many different kinds of beer as possible, will be out in full force.

Ticking can lead to overindulgence though, a concept that’s become one of the more recently scrutinized craft beer culture vices as of late. Just because there will be 250+ different kinds of bizarre, ultra-rare types of beer to try doesn’t mean you actually have to try them all, right?

What if you could only try a few of these world class beers?

With that in mind, we put together a list of five breweries whose beers rarely make it to New England that are worth standing in line for.

[i] While lines are almost inescapable at fests like this, it’s worth mentioning that the move from the Cyclorama in years past to the much, much larger Seaport World Trade Center this year will help.

Tampa Bay’s Cigar City Brewing made many a headline after a riotous crowd descended on the brewery earlier this month for Hunahpu’s Day, the day in which the much sought after Hunahpu’s Imperial Stout (another 100 on BA) was released. It didn’t take long for footage to spread on Youtube of fans clamoring loudly outside the brewery as soon as they sold out and attendees couldn’t get the beer they were expecting. While it’s highly unlikely a keg of Hunahpu will make it to EBF, the brewery is bringing a handful of other tropically inspired brews, many leftover from Hunahpu Day, to Boston this weekend.


Try: Don Gavino’s Big Guava, a tart beer brewed with guava, aged in chardonnay barrels, the Margarita Gose, a limey, salty, margarita-inspired beer, and a special batch of Marshal Zhukov, another one of Cigar City’s well-regarded imperial stouts that has spent some time in rum barrels.
I’ll admit to knowing very little about the state of Iowa (well, except the plot to that Ed Helms “Cedar Rapids” movie), but know I cannot wait to taste Toppling Goliath Brewing Company’s Mornin’ Delight, an inky black Russian Imperial Stout that’s been compared to “pancakes smothered in maple syrup and coffee.” For what it’s worth, the beer is another that’s rated 100 on BA and is usually incredibly difficult to get outside of the American Heartland – TG only distributes to Iowa and Wisconsin. The brewery makes its home in the tiny, remote town of Decorah (population 8,109) and prides itself on making big beers brewed in small 10-barrel batches.


Try: Mornin’ Delight obviously – but also try the brewery’s trio of hoppy IPAs, ZeeLander, Sosus and PseudoSue, brewed with New Zealand Nelson Sauvin hops, Mosaic hops and Citra hops, respectively.
Denver’s Chad Yakobson is brewing some of the best sour and funk-tinged beers in the nation; each one uses a meticulous combination of wild yeasts, souring organisms, brettanomyces and barrel-aging to reach their full potential. Determined New England Stave fans can usually find a few of Yakobson’s beers in bottles at finer bottle shops in Vermont and on tap in Brooklyn and Portland from time to time (I was lucky enough to grab a glass of the refreshing Hop Savant at Torst and the brett-tinged Surette Provision Saison at Novare Res last year). Normally, however, one has to make their way to Colorado to try his beers.


Try: Nightmare on Brett, an oaky, Brett Baltic porter aged in bourbon barrels and CS’ winter edition of its Vieille Artisanal Saison, a fuchsia-colored farmhouse ale brewed with cranberries, cinnamon, hibiscus and nutmeg.
Surprise! Another Florida brewery! Despite the amount of flak the Sunshine state gets over its, well, curiously vibrant personalities from time to time, thanks to the previously mentioned Cigar City, St. Petersburg’s Cycle Brewing and Funky Buddha, Florida has been cranking out some in-demand brews the last several years. Funky Buddha, who make their home on a stretch of strip malls in Oakland Park, 10 minutes north of Fort Lauderdale, have drawn their fair share of thirsty masses thanks to their Maple Bacon Coffee Porter and Nib Smuggler, their Chocolate Milk Porter.


Try: Unfortunately neither of the aforementioned beers are on this weekend’s menu but we’re willing to bet that What’s For Breakfast, a double brown ale that smells like French toast and syrup and No Crusts, a beer that showcases the “intense aroma of creamy peanut butter mingling with mixed berry jam” will do the trick. Those looking to channel the summery weather of Florida (palm trees, spring training, etc.) may want to try the Passionfruit Berlinerweiss. The tart German style beer is brewed with the tropical fruit puree and promises to be an “intoxicatingly fruity, yet refreshing experience.”
Beer fans are likely familiar with Dark Horse’s Crooked Tree and Double Crooked Tree series of IPAs, as well as its coffee dopplebock, Perkulator, as the Michigan brewery regularly distributes to Boston. The band of mostly bearded brothers is bringing out the big guns for EBF though, like a bourbon-barrel version of its Plead the 5th imperial stout.