5 best quotes from this week’s ‘Girls’: Death is everywhere 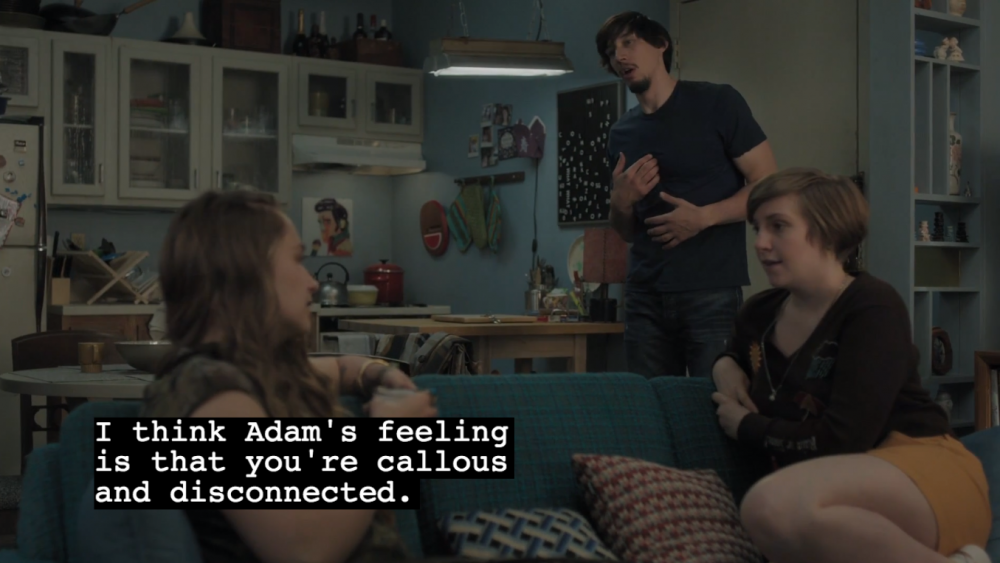 If it wasn’t already clear that the characters on HBO’s “Girls” are the worst people you know, this week’s episode makes the definitive case that, yes, they are all assholes. Or, anti-heroes at that. This week’s episode was a pretty lame attempt to get us to realize this fact, but it doesn’t manage to make a strong case for us to continue giving a shit. Are these women never going to figure it out? Even in life and death situations?

Not unlike those of her mentor Judd Apatow, Lena Dunham’s characters have very few redeeming qualities and actually force you to actively dislike them. Possibly because they hit too close to home, but it’s more likely because these people are actually just terrible human beings.

In this episode, Hannah confronts the death of her editor, David (of last week’s Grindr app download), with all the warmth and class of a 7-11 slurpee.

Here are the five best lines from season 3, episode 4, “Dead Inside.” 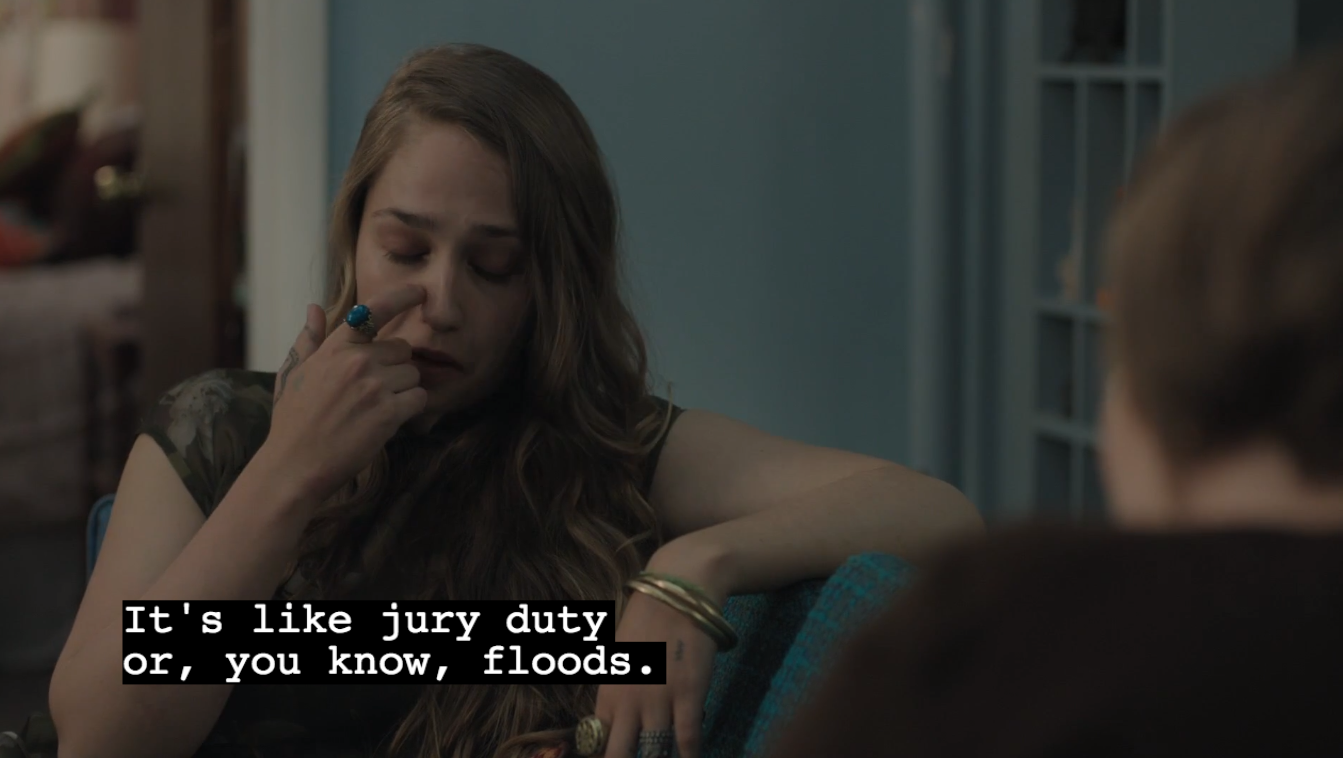 Jessa is in fine form here, playing the sage and honest confronter of all things life and death. She’s incredibly blasé and enables the same negative quality in Hannah, who is not the least bit concerned that her editor and colleague is dead. Instead, she’s only concerned about the future of her e-book. Jessa, instead of feeling sad about death, becomes naively philosophical instead, lecturing Hannah about the nature of the dimensions of time. (What? It’s 11 a.m., girl, get it together. How stoned are you?) They’re a fine pair of heartless bitches, these two.

“You’re getting your news from Gawker?” 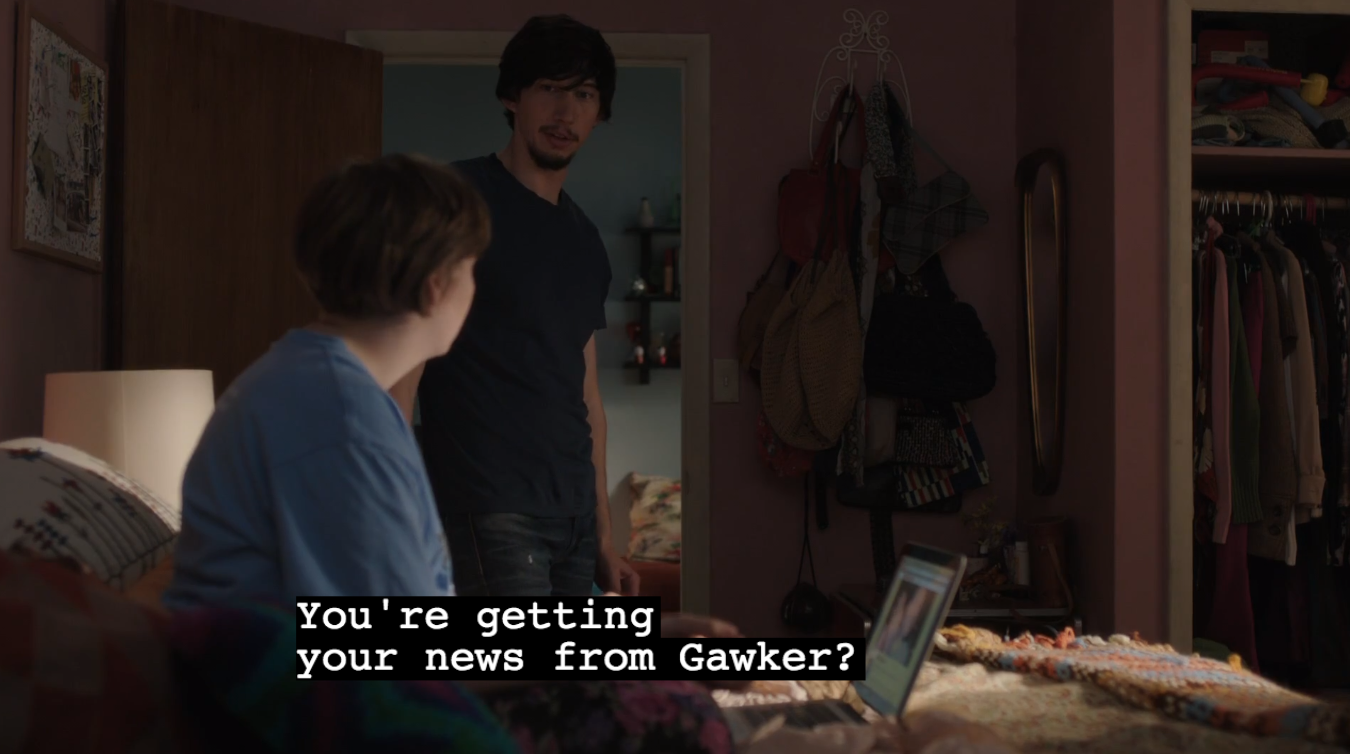 Adam is perturbed by Hannah’s chilly response to David’s death. Hannah, meanwhile, doesn’t get why he’s weirded out by the fact that instead of feeling depressed – or even the slightest bit confused – about what she calls her “first death,” she doesn’t feel anything. They get into a hilarious argument about whether Gawker and Jezebel are worthwhile places to digest and discuss news, or cesspools of Internet gossip-mongering. These are the times we live in. When Adam asks Hannah how she would feel if he died, we see that maybe her lack of depth isn’t a byproduct of her sheltered upbringing, nor is it an act. Hannah is legitimately a bad person. (For the record, I’m torn on the Gawker issue, and I agree with both Adam and Hannah). 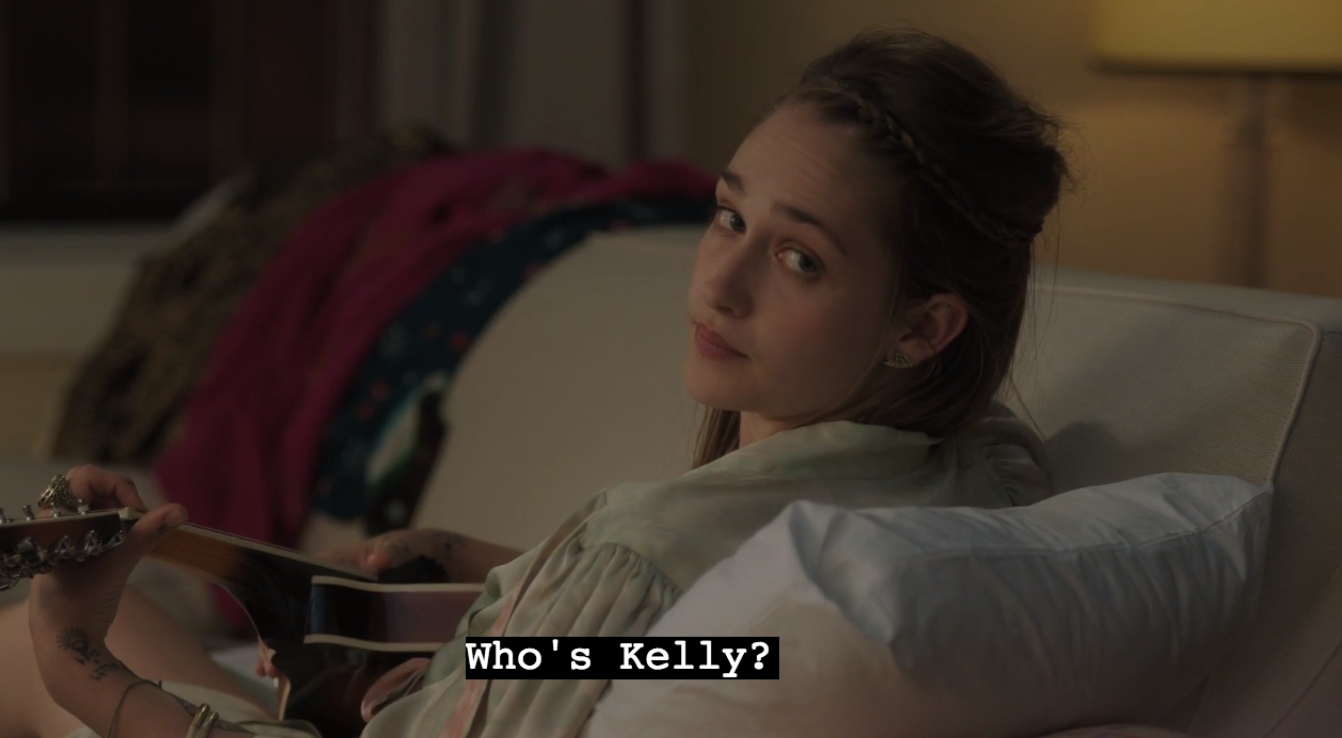 Jessa and Shoshanna discuss Hannah’s recent loss by sharing their own stories of confronting death. Shoshanna, while organizing her bandana collection (her “most developed collection, for the record), tells Jessa of her friend Kelly, who died in a car crash in high school. Shosh doesn’t quite outdo Hannah with her casual reaction (she did write a book of poems for Kelly, after all), but she is quite flippant about her friend group being better off with five girls instead of six. Seriously. Then, Jessa shares her story, about a girl named Season (?) who she used to love to tickle. And when Shosh refers to Kelly again, Jessa has no idea what she’s talking about, proving once again that Jessa’s obliviousness to the feelings of literally everyone else is her defining personality trait. Well, serves her right. We find out that Season actually faked her own death just to get away from Jessa the Douchebag.

“What the fuck is wrong with you? … Your little brow didn’t even furrow!” 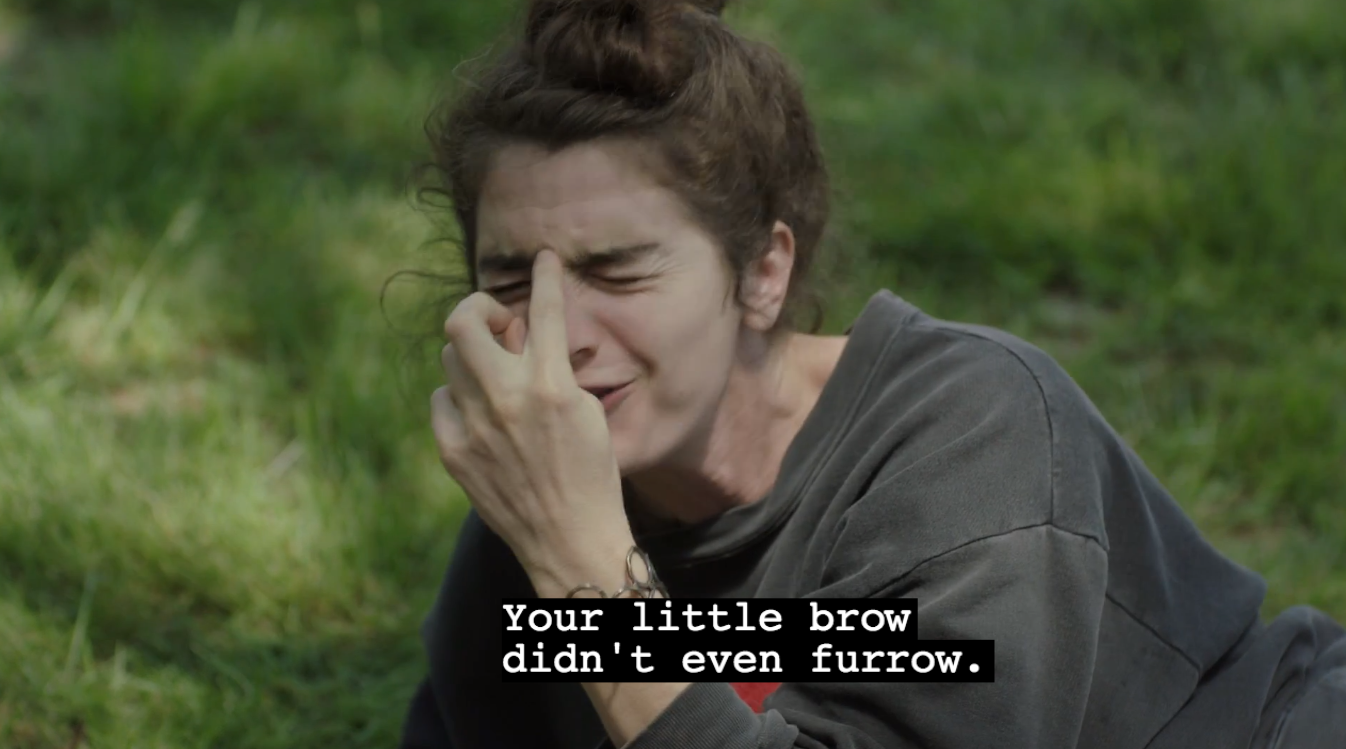 Yay, Adam’s sister, Caroline (Gaby Hoffman), is back! And can we just talk about how amazingly fucking nuts her outfit is? Upside down Mickey Mouse sweater, two-sizes-too-small varsity jacket, actual fucking lacy pantaloons?! And then we’re treated to a montage of Caroline, Hannah, and Hannah’s downstairs neighbor Laird doing somersaults through a cemetery, because obviously, this is an episode about playing around with the idea of death. (Get it, guys? Get it?!) Laird’s dead pet turtle is also along for the ride to add just an extra pinch of bizarre to the absurdity of this moment. Then, Caroline, as the show’s “crazy” person, tests Hannah by telling her a made-up sob story meant to see if she has any soul at all. Apparently not! All Hannah can do is make it about herself. For a brief moment, we consider that maybe this is a byproduct of her anti-depression medication, but that’s glossed over. Hannah’s response to the story is too much for Caroline, who, like Adam, feels things for others, and flips out at Hannah’s nonchalance. Caroline is mentally unstable, but hey! At least she gives a fuck. I love her. Moar plz!!

“Fancy people wanna work with me!” 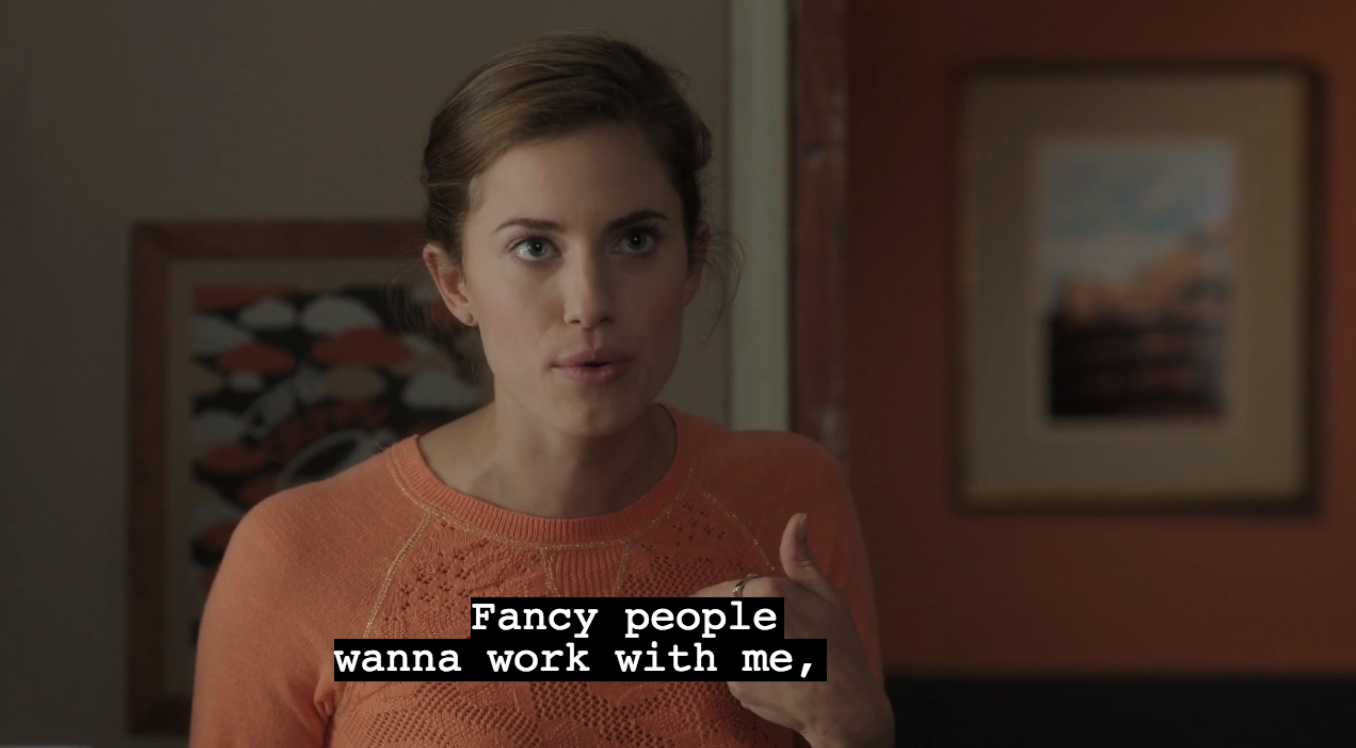 Marnie. JUST STOP. Fancy people do not want to work with you. You are a brat. You have no marketable skills besides having a pretty face. You are an asshole. Please either get your shit together or leave the show. This is ridiculous.

Extra Credit: “Hannah, why don’t you place just one crumb of basic human compassion on this fat-free muffin of sociopathic detachment?”

Ray, ever the voice of reason, pretty much sums up what we’re all feeling here.

Always a pleasure to have Boston.com’s Perry Eaton in studio for a chat. After we talked a bit about Pearl Jam at Fenway and Perry’s new podcast, he filled us in on Game of Thrones live and Narragansett’s new Bananagrams-themed brew. END_OF_DOCUMENT_TOKEN_TO_BE_REPLACED

No, not from afar, from the comfort of her couch. From the actual awards themselves. That’s where Meredith Goldstein was for the Oscars. She shared all the juicy, first-hand details with me. END_OF_DOCUMENT_TOKEN_TO_BE_REPLACED

It was wonderful having our good friend Meredith Goldstein back in studio this morning. She dug into the latest edition of Love Letters, which prompted us to play this song. And of course we had to discuss the Oscars. Make sure you’re following Meredith on Twitter, as she’ll be live-tweeting the awards this Sunday night. END_OF_DOCUMENT_TOKEN_TO_BE_REPLACED

Our first edition of TV Sets for 2016 might be better than every edition from 2015. END_OF_DOCUMENT_TOKEN_TO_BE_REPLACED