5 beers to drink in Boston for Session Beer Day today 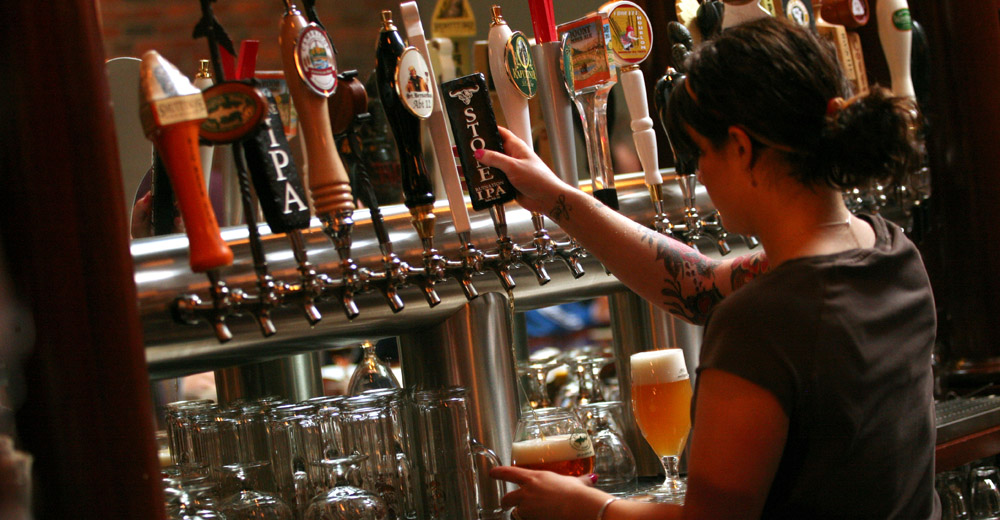 Anyone looking for a good excuse to drink a beer at lunch today – and really, having one is okay, even encouraged – can take solace in the fact that today is the day to do it.

April 7 unofficially marks not only National Beer Day but Session Beer Day, a holiday based around celebrating flavorful, yet low in alcohol, session beers.

First hatched by whiskey/beer scribe Lew Bryson in 2012, the day loosely recognizes Little Repeal Day, when 4.0% ABV beer became legal before the repeal of the 18th Amendment. It may fall on a Monday this year, but as Bryson points out, “It’s session beer, that’s what this is about. So get on it and drink!” Bryson’s Session Beer Project, a project he started several years ago to channel his efforts, technically classifies session beer as anything under 4.5% ABV (alcohol by volume).  It’s a loose term though—Some Brits refuse to acknowledge anything over 4.0% ABV as session beer while the Brewer’s Association (.PDF) defines session beer as anything that falls between 4.1% and 5.1% ABV.

While it’s far from a sponsored or sanctioned event, this is likely the closest it’ll come to being official. Mounting Twitter buzz (see the hashtag #SessionDay) has certainly helped. A full slate of events are scheduled for around the country and bar owners nationwide have been encouraged to put a few sub-5.0% ABV beers on tap today.

A handful of breweries have recently followed suit too, pushing out a wave of new ‘sessionable’ beers to market. Surely beer drinkers have seen aggressively hoppy but lower ABV offerings like Boulevard Brewing’s Pop-Up IPA (4.4% ABV), Founders All Day IPA (4.7% ABV) or Lagunitas’ similarly named Daytime IPA (4.6% ABV) invade Boston shelves as of late. The beers more or less have the same gist – they’re hoppy, crushable, and not too unwieldy. Still though, these kinds of beers invite debate: Isn’t a session IPA just a pale ale? Will breweries make their next beers truly sessionable and lower their ABV below 4.5%?

In the end though, really, can an influx of tasty new beer choices be a bad thing?

Chris Lohring’s Notch Brewing has managed to stay fiercely dedicated to session beer and continues to churn out 12-packs of its Session Pils, along with several other exciting offerings on draft and in 22 oz. bottles. We loved the Corn Lager and patiently await Left of the Dial cans (soon!). The brewery is ringing in Session Beer Day today at Deep Ellum at 5 p.m. with some of their offerings, gratis mugs and several other sessionable options.

Not sure what to drink? Try hoisting a frosty .5 L mug – or cracking multiple bottles – of the following today:

Why not celebrate Session Beer Day with an authentic, European offering? Light, subtly smoky and only 4.3% ABV, the Helles Lager from Aecht Schlenkerla, a Franconian brewery on the outskirts of Bamberg, Germany, could be a prime candidate for your after-work beverage today. Traditionally served in large .5L glasses the beer is lagered in century old caves beneath the brewery.

Bonus: Get a tall glass alongside a Giant Haus Bretzel or sausages at Union Square’s Bronwyn.

Any I-don’t-drink-on-Mondays folks still needing an excuse to enjoy a beer tonight… today also marks National Beer Day. On this day 81 years ago the Cullen-Harrison Act went into effect, bringing to an end years of prohibition in the United States.

Coming in at 4.1% ABV, Černé Pivo, Czech for “black beer,” is Lohring’s take on a session black lager. The beer, which first hit the shelves back in 2012, is a textbook example of the style—it’s dark and roasty but remains supremely drinkable, perfect for tall steins or liter glasses. While it may not have the easiest name to pronounce and may not be the most marketable style – especially in the face of hopped up IPAs and bulky barleywines – we’re happy Černé has stuck around. 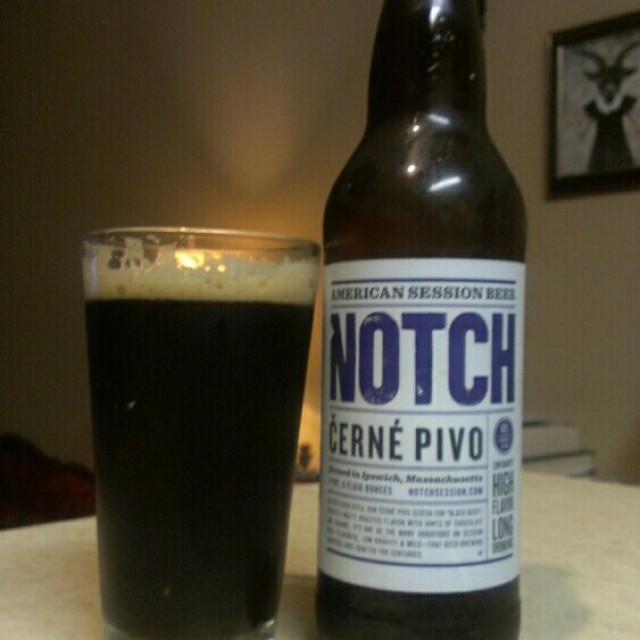 Another Boston area brewery, Chelsea’s Mystic Brewery, crafts this year-round session saison. The beer is a brewmaster Bryan Greenhagen’s example of the tafelbier style, a Belgian style first shared at meals by families in Belgium. Mystic’s version, with notes of straw, grass and farmhouse yeast, comes in at 4.3% ABV, but if you were lucky enough to catch them at last month’s Extreme Beer Fest, you could’ve tried a “petite” version of the beer that clocked in at a scant 2.2% ABV. While beers like this were originally intended to be shared, it’s hard to imagine anyone scoffing at you for finishing a bottle yourself over the course of the night. 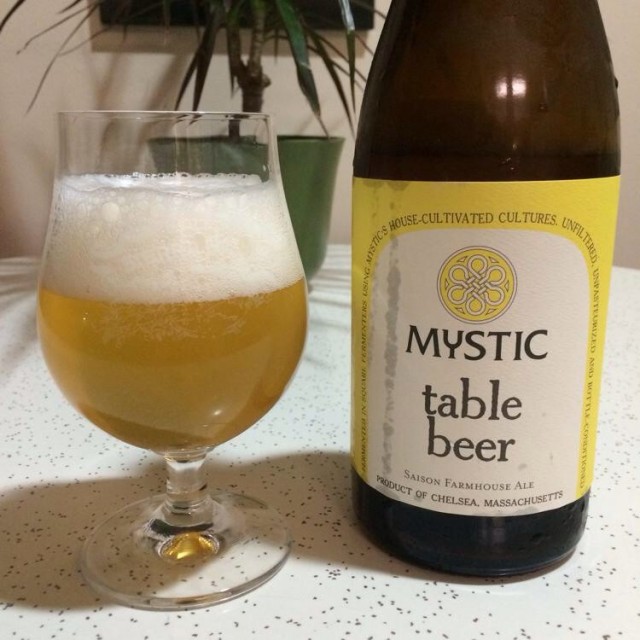 This Morrisville, Vt. brewery, situated between Hill Farmstead and the Alchemist Brewery makes for an excellent stop-gap for anyone traveling the Vermont beer circuit. The rustic farmhouse brewery has excelled early on at crafting lower alcohol, full flavor beers. Its pilsner, Belgian pale ale, and gose all come in a few ticks below 5% ABV. The gose (pronounced ‘goes-uh,’ 4.6% ABV) in particular is a delightfully tart and briny beer made with salt and coriander. Lost Nation surfaced in Boston back in October, first at Lord Hobo, then Stoddard’s. Now they’ve got a few accounts in the city. Kegs have surfaced at PICCO in the South End, Bukowski’s in Inman, even Charlie’s Kitchen has had it on draft here and there over the last few weeks. The beer should be in bottles before long and we’re crossing our fingers that they wind up making their way to Boston sooner than later. 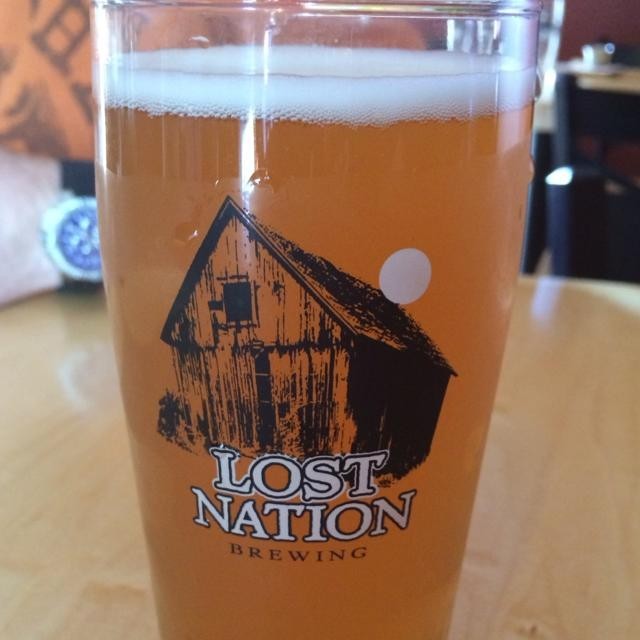 Much to the delight of Bryson, Stone Brewing, long known for cranking out abrasive tongue-bucklers, has finally started distributing a 4.5% ABV (not 4.6%, not 4.7%… as Bryson notes) session IPA called Go To IPA. The beer utilizes a technique they call “hop-bursting,” which basically means they added a boatload of late-addition hops and dry-hopped it with a healthy amount of Mosaic, Citra and Cascade. Marketing buzzwords and bright, flashy packaging aside, the beer is vibrant and aromatic, making it easy to put down a few bottles of this hoppy ale, especially on a day dedicated to drinking beers like it. 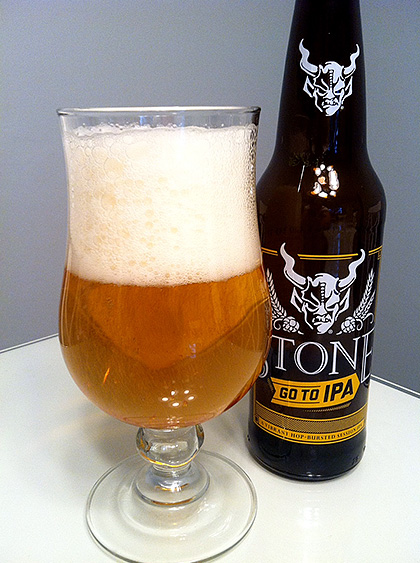