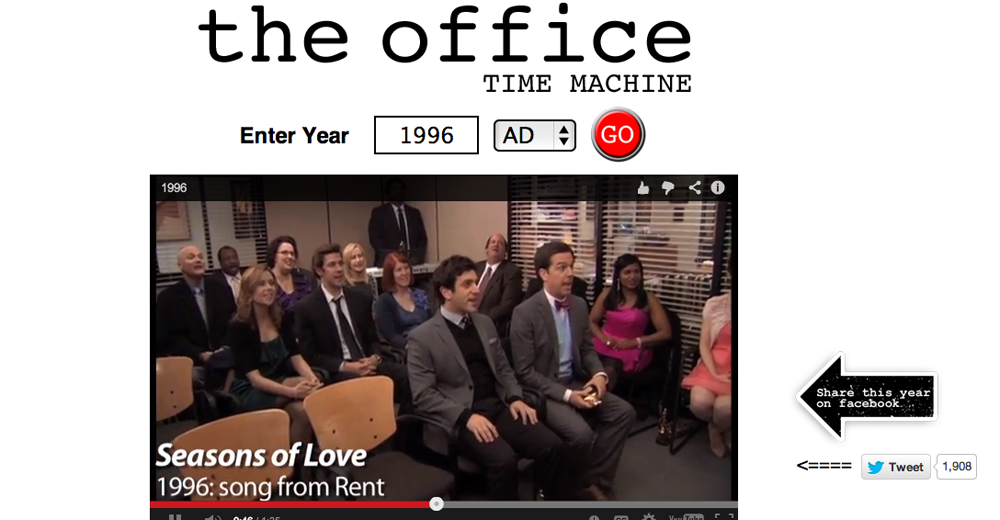 Joe Sabia spent the past year and a half of his life watching “The Office.” Late last month, the Boston College alum debuted the fruits of his labor, The Office Time Machine. The website features supercut videos that include every cultural reference ever made on show—more than 1,300 in total—and organizes them by year. While “Office” fans may rejoice at the opportunity to revisit their favorite TV show, Sabia wants his project to do more than celebrate the best of Michael Scott and Dwight Schrute. He wants to raise awareness about fair use and the need for copyright reform.

What exactly does “The Office” have to do with copyright reform, you ask? Let’s rewind and start with the basics: YouTube. Perhaps you’ve heard of it? Of course you have. Nielson stats say YouTube reaches more U.S. adults ages 18 to 34 than any cable network.

From the Harvard baseball team’s cover of “Call Me Maybe” to the girl who quit her job by dancing to Kanye West’s “Gone,” every day, members of the YouTube generation create the videos that become the next great Internet sensations. Sabia has made a few of these viral videos himself, including his lightning-round recaps of The Sopranos and Breaking Bad.

But amidst these super cool YouTube creations there’s also a ton of dead links on the site. Seriously, who hasn’t clicked on a video only to be told that it’s “no longer available due to a copyright claim”?

So, what’s the deal with that? Here’s the scoop on how YouTube works, courtesy of Sabia:

Made something awesome that you want to share with the world? Great, join the crowd and upload it to YouTube. One hundred hours of video content is uploaded to the site every minute, according to YouTube’s statistics.

Now that your video is up, YouTube will scan it with a content I.D. system to see if it contains any registered copyrighted material. That could be a song, movie clip, logo, or any of the other millions upon millions of registered items. If the system detects any matches, the copyright holders will receive an alert, letting them know your video is committing copyright infringement, meaning it’s using their property without consent.

Once alerted, the copyright holders have a choice: They can either leave the video up—sometimes choosing to place ads on it—or issue a takedown notice, at which point your video will become one of the many dead links on YouTube. Millions of takedown notices are issued to YouTube every week.

If your video is taken down, you can appeal the decision. The copyright holders then have a 30-day window to decide whether they want to press charges for copyright infringement or allow the video to go back up.

In theory, the process seems fair enough. It protects copyright holders from having their work reused illegally, and that’s great because that’s exactly what copyright laws are designed to do. But this system also inherently assumes that everything uploaded to YouTube that contains copyrighted material is using that material illegally.

In fact, there are legal ways YouTubers can use copyrighted items. Fair use doctrine, the legal defense employed by many of the video makers who end up in court, protects creators who use copyrighted materials for works of satire, as well as many educational, non-commercial and other such users. So, despite what the copyright notice on your YouTube account may say, you might legally be allowed to include that clip from your favorite song in a video.

“Everything needs a quick review on intent. It’s one thing for a machine to recognize the use of content, but it’s another thing…to just assume people are stealing content [and] uploading full movies and TV shows,” Sabia says. “I would venture to say that more people [on YouTube] are interested and curious with using content in a way that transforms it somehow, rather than just ripping it and uploading it, and that is the real infringement.”

The problem is that there’s really no way for a human eye to review the intent of every single video uploaded to YouTube—that’s why copyright holders rely on these automated scanning systems. Still, the countless videos removed from the site every day due to copyright claims leave potential video makers hesitant to waste time on a project that could be taken down or, worse yet, land them in an expensive lawsuit, Sabia says.

So, why should we care if these videos exist on YouTube?

YouTube provides young people with an amazing platform to take the culture they love and transform it into something new. So the copyright system doesn’t just discourage creators from sharing awesome videos. It stops them from producing new culture.

And that brings us back to “The Office.” Remember those awesome supercut videos Sabia compiled? You know, the ones that show how one of the most popular programs in recent TV history legally used copyrighted material more than 1,300 times?

Those videos prove just how much we rely on old culture to make new culture. “Everything we have from TV shows to songs to books quotes, these things we hear and see on a daily basis, these are our culture,” Sabia says. “For a show like ‘The Office’ with 10 million viewers to take these things and use them to bring together people who don’t even know each other, that’s something really special worth celebrating.”

A decade of Wreck The Halls. END_OF_DOCUMENT_TOKEN_TO_BE_REPLACED

Carl Isaacs, General Manager of Renewal by Andersen of Boston joined me in studio this morning to talk about a special offer: save 20% on windows and patio doors and your installation is included. Listen in for the details! END_OF_DOCUMENT_TOKEN_TO_BE_REPLACED

Leah Wellbaum from Slothrust brought her trusty six-string to Studio B and turned in the first RadioBDC Session of 2017. Check out her three songs and her chat with Julie Kramer, recorded live on February 28, 2017. END_OF_DOCUMENT_TOKEN_TO_BE_REPLACED

Mike McColgan and Lenny Lashley of Street Dogs were in session on November 30, 2016 to play three songs and chat about their annual Wreck The Halls shows at Brighton Music Hall December 15-18. END_OF_DOCUMENT_TOKEN_TO_BE_REPLACED

Tegan and Sara stopped by for a chat before their House of Blues show on Halloween night. END_OF_DOCUMENT_TOKEN_TO_BE_REPLACED

The sultry boom of Ruby Rose Fox rounded out a summer of sessions in Studio B presented by FindMassMoney.com. Enjoy the videos and Ruby’s chat with Julie Kramer. END_OF_DOCUMENT_TOKEN_TO_BE_REPLACED

She is Dee Dee from the Dum Dum Girls no longer. She is now Kristin Kontrol, and she played a short set for us in Studio B on June 17, 2016. END_OF_DOCUMENT_TOKEN_TO_BE_REPLACED