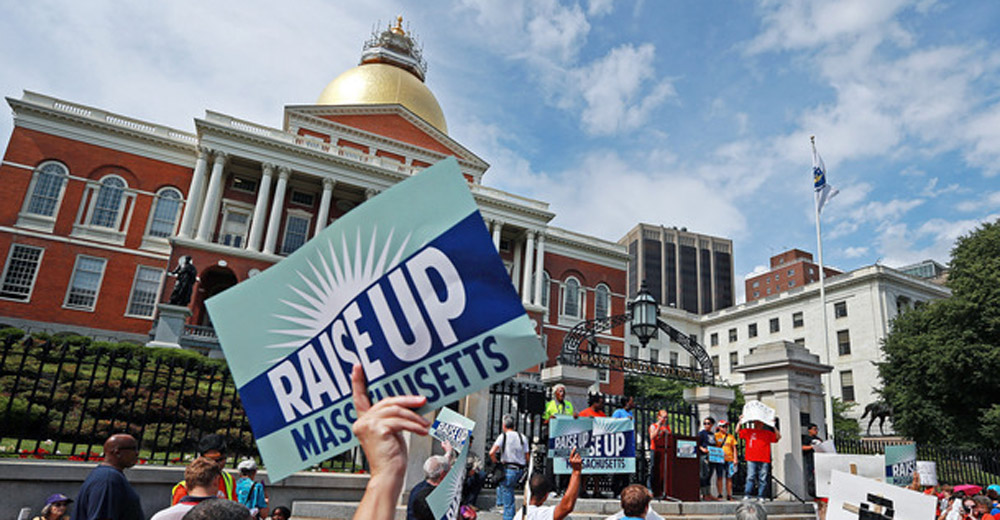 President Barack Obama has been speaking out for years in favor of an increase in the federal minimum wage, but due to the resistance from most Republicans to most of Obama’s ideas, it’s unclear that any kind of increase will be passed at the federal level.

A Tale of Two Bills

Since the first one was introduced last June, two separate bills have been proposed, one by the Massachusetts House and one by the Senate, which means neither has the required support to make it in front of the governor. They would raise minimum wage to either $10.50 or $11.00, respectively. Each bill comes with a number of provisions, like how much to raise the wage for tipped workers (right now at $2.63) and and how far above the federal minimum wage the state wage must remain.

It’s been six years since Massachusetts raised the minimum wage, and it’s unclear when, or if, either piece of proposed legislation will make it to the governor’s desk. Whether or not the bills are approved by either house is likely far more dependent on the provisions attached to the bills rather than the $0.50 difference at the bill’s core.

The Senate bill, for example, would link future minimum wage increases to the rate of inflation (basically making sure that people continue to be paid a living wage as each dollar becomes less valuable), while the House’s bill would not. Additionally, the Senate bill would take on a far more aggressive increase to the minimum tipped wage, which has not seen an increase since 1999: where the House is asking to increase the minimum tipped wage to $3.75, the Senate is asking to require 50 percent of the regular minimum wage, which would nearly double the minimum wage for tipped workers within three years.

With so many divisive issues tied to the same bill, it is unclear when any form of either draft will hit the governor’s desk. It’s possible that Governor Deval Patrick could rule on a bill before leaving office, but it is not likely.

What is likely, though, is that this issue will press on until some kind of agreement is reached. Should Massachusetts approve a minimum wage increase, it will follow more than half a dozen other states, including New York, New Jersey, and Connecticut. A group of activists called Raise Up Massachusetts is collecting signatures for a question on the minimum wage to appear on the November ballot.

Where do the Parties Stand?

The issue of minimum wage falls pretty neatly along party lines, with Democrats voting aye and Republicans voting nay, and this year’s candidates live up to those expectations. Nearly all the democratic candidates list raising the minimum wage as one of their priorities. Martha Coakely says she will fight for an $11.00 minimum wage, as does Don Berwick. Steve Grossman says that he understands the need for a wage hike, and all three of the aforementioned candidates also support paid sick time for workers.

A spokesman for Charlie Baker, the Republican frontrunner who will likely face off against Martha Coakley in November, said that while Baker is open to a wage hike, he is more interested in finding money for lower income workers through tax credits and other reforms.

Enter to win a pair of tickets to attend The Hess Collection Seminar and Dinner as part of Boston Wine Festival 2018 at the Boston Harbor Hotel on Wednesday, March 14th. END_OF_DOCUMENT_TOKEN_TO_BE_REPLACED

Chef David Vargas, Owner of Vida Cantina in Portsmouth, NH is hosting a one-time-only event that he created to raise money for foundations supporting immigrant workers and their families. He joined me in studio with Chef Daniel Bojorquez of La Brasa in Somerville to talk about Si Se Puede – Yes We Can Dinner on Sunday, April 2. END_OF_DOCUMENT_TOKEN_TO_BE_REPLACED

Boston band Funeral Advantage is Tyler Kershaw. And Tyler Kershaw had a fun childhood, so it seems. END_OF_DOCUMENT_TOKEN_TO_BE_REPLACED

Perry put me on to daephne and the album blew my mind. END_OF_DOCUMENT_TOKEN_TO_BE_REPLACED

While many have called out Davis since a video of her refusing to issue a marriage license to Rowan County residents David Moore and David Ermold went viral in July, relationship columnist and gay activist Dan Savage went a step further on MSNBC Tuesday night, saying that “this is about someone hypocritcally looking to cash in”. He added: “And she is a hypocrite.” END_OF_DOCUMENT_TOKEN_TO_BE_REPLACED