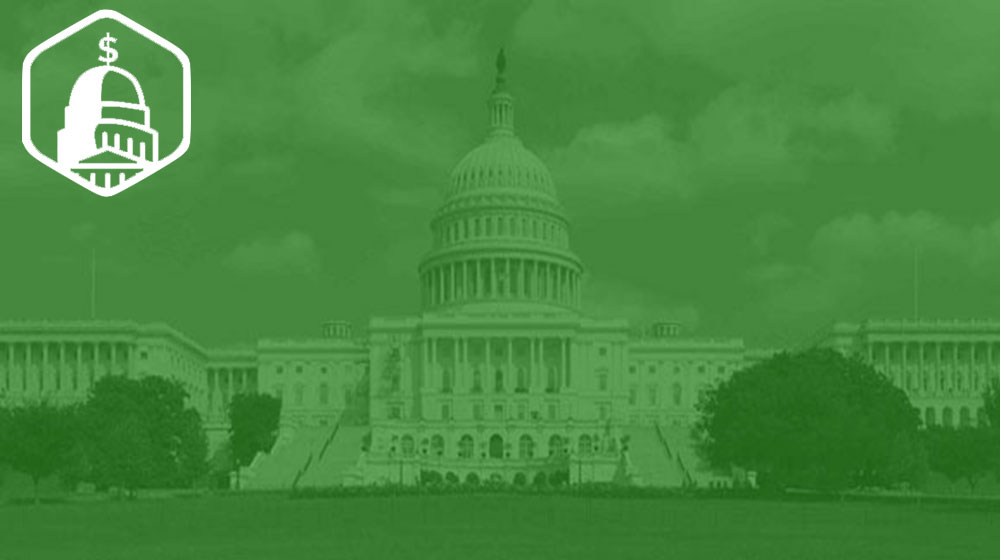 It’s no secret that lobbyists and corporations have considerable financial influence on politicians in Washington, but finding out exactly who funds who in any given election cycle isn’t exactly a walk in the park.

Well, exposing the money behind the members of Congress has gotten a lot easier thanks to a new browser plugin called Greenhouse. The extension (which is available for Firefox, Chrome, and Safari) was created by a 16-year-old Seattle high school student named Nicholas Rubin, and it’s pretty ingenious.

Once the plugin is installed, the names of politicians will be highlighted on any article you read, whether it’s on BDCwire, the New York Times, Fox News – whatever. If you hover your mouse over the name, a box will pop up containing a detailed report of the politician’s campaign contributions, broken down by industry. 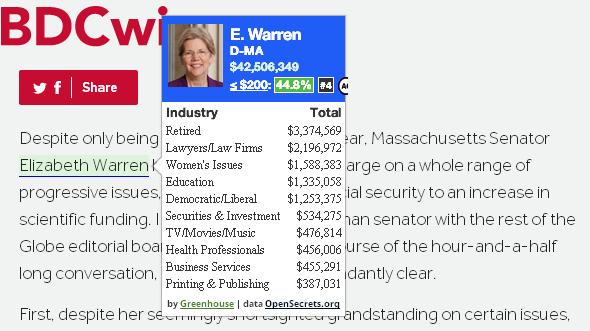 Considering how easy this new web tool is, we decided to take a look at the profiles of politicians from Massachusetts to see how they measured up.

No U.S. senator or representative from the Bay State received a higher campaign contribution total than Sen. Elizabeth Warren, who fundraised over $42 million in the 2012 election cycle. 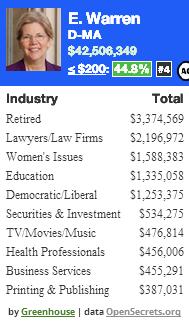 The junior senator for Massachusetts may not boast the fundraising power of Sen. Warren, however, only 1.3 percent of his funds in the 2012 cycle came from donors who gave $200 or less. The low percentage places him at No. 464 on the list of Congress members who received the highest percentage of small contributions that year.

It’ll be interesting to see how the data from Markey’s re-election campaign this year will compare to his previous numbers. While the 2014 cycle isn’t over yet, early reports by OpenSecrets.org say that the senator has raised nearly $17 million in funds between 2013 and 2014, a stark increase from the amount he was receiving as a member of the House of Representatives.

As for the state’s current representatives serving in the House, you can check out their profiles below. (A profile for Rep. Katherine Clark is not available as she only recently took office after winning a 2013 special election for the vacant seat left by Markey in the state’s 5th district.) 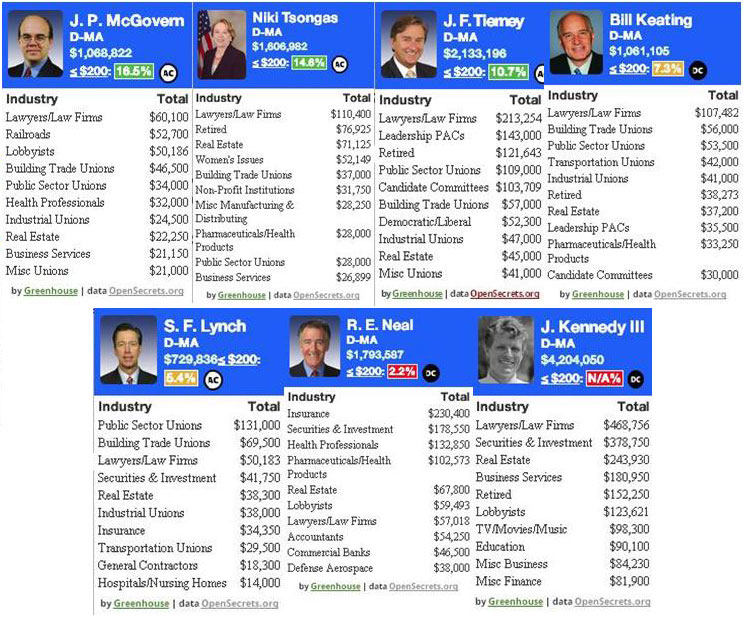 While that number is certainly high, 44.8 percent of the contributions were from donors who gave $200 or less. Warren ranks no. 4 on the list of Congress members who received the highest percentage of small contributions in the 2012 cycle, behind Alan Grayson (64 percent), Bernie Sanders (59.1 percent), and Michele Bachmann (58 percent).

The data for Sen. Ed Markey, who won the vacant seat left by John Kerry in a special election last July, is unfortunately limited to his time as a member of the House of Representatives, where he served from 1976-2013. Markey, who previously served Massachusetts’s 7th district, was elected to the state’s 5th district in the 2012 cycle, which is what his current Greenhouse numbers are based on. 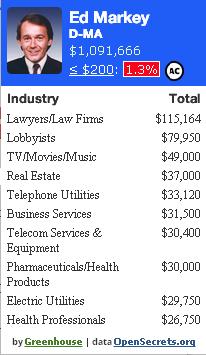 Between the data available on Greenhouse for Massachusetts’ two senators and seven members of the House, six out of the nine politicians had lawyers/law firms listed as the industry that donated the most to their campaigns in the 2012 cycle. Only Sen. Warren and Rep. Stephen Lynch had another industry as their top contributor.

All in all, it’s pretty interesting to see where all these politicians get their money from, and hopefully citizens can use this app to become more informed about their elected officials.