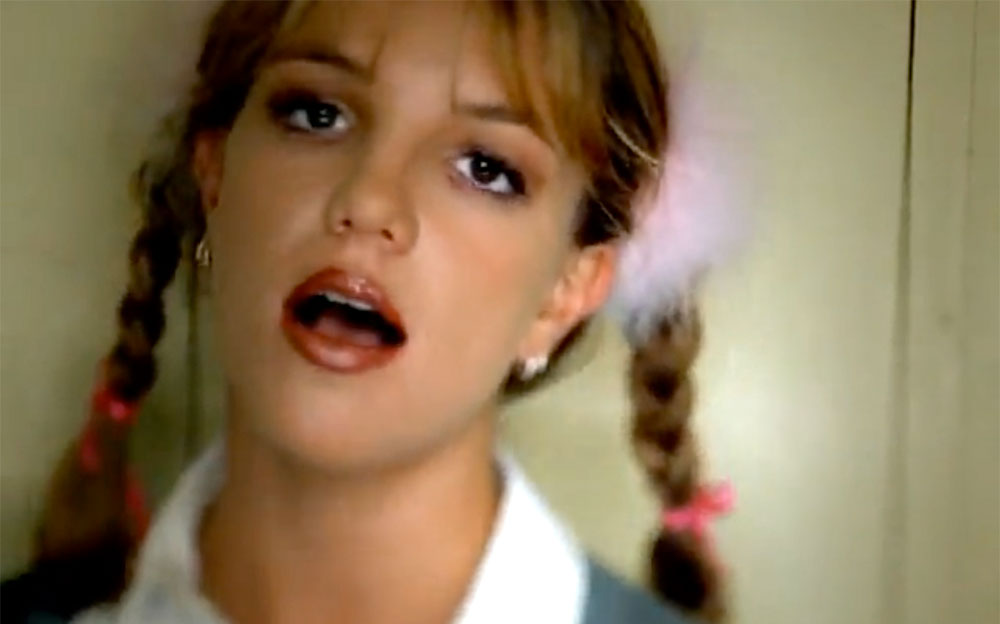 This week marks the 15th anniversary of “…Baby One More Time” dropping, creating a megastar of the plaid schoolgirl outfit-wearing Britney Spears. Since then, Spears has transcended the music world to become a cultural icon. Love her or hate her, you know every word to “Oops!… I Did It Again” and you will never forget when Britney and Justin Timberlake wore matching Canadian tuxedos to the 2001 American Music Awards (OK, maybe that’s just me). Now that we’re getting nostalgic, let’s reminisce on the highs and lows of her unforgettable career.

The 17-year-old’s first album “…Baby One More Time” debuts at No. 1 on the Billboard 200, and the title single with its Catholic schoolgirl-inspired video hits No. 1 in the US and every country in which it charts. And so the domination begins.
Britney tops the charts again when she ditches her school uniform in favor of red jumpsuits and astronauts and releases her sophomore album “Oops!… I Did It Again.”
Brit delivers her first of many iconic performances at the MTV Video Music Awards (VMAs), during which she rips off a black tuxedo and reveals a flesh-colored sequin jumpsuit. The world becomes officially convinced that she’s not that innocent and the look goes down in Britney history.
Britney delivers show-stopping VMA performance No. 2 singing “I’m a Slave 4 U” while wearing little more than spandex short-shorts and a live python. The performance causes every man and woman on the planet to crush on Spears, pushing her third album, “Britney,” to the top of the charts.
The pop princess hits the big screen as the star of “Crossroads.” I know, I like to pretend that didn’t happen, too. Let’s just move on.
Young girls all over the world stop believing in love when Britney Spears and Justin Timberlake call it quits after three years of dating. But in June, Britney proves she don’t need no man and tops Forbes’ Celebrity 100 List as the most powerful celebrity of the year. Ladies and gentleman, please bow down to your ruler. 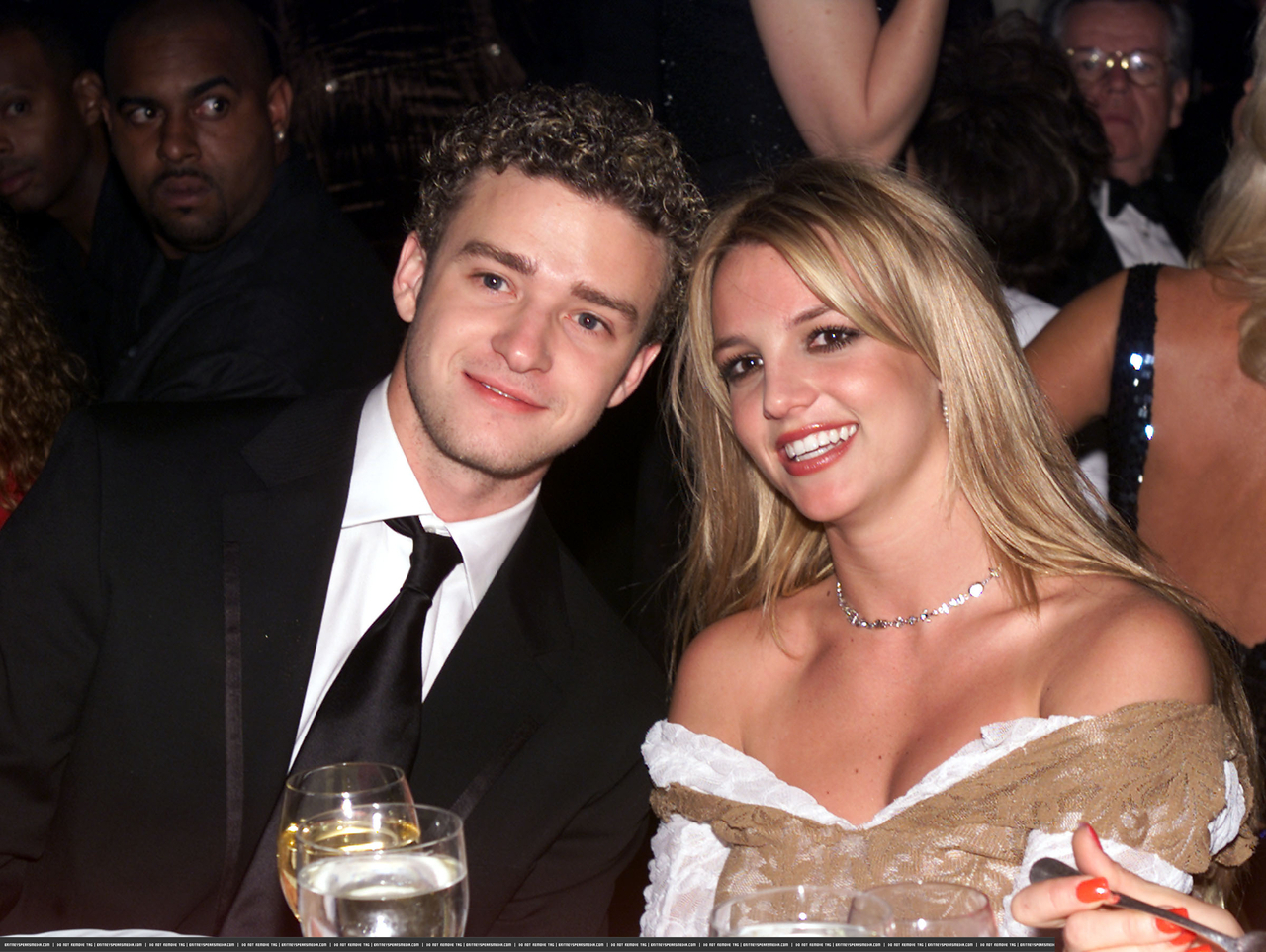 Britney locks lips with Madonna while singing “Like A Virgin” at the 2003 VMAs. Seconds later, Christina Aguilera does it too, but we are all too busy looking at Britney to notice.
Britney drops her fourth album, “In the Zone,” and becomes the first female artist to have four albums debut at No. 1. The album’s single “Toxic” gives Britney her first and only Grammy. That’s a lot of firsts.
Britney forgets that legally binding ceremonies that happen in Vegas don’t stay in Vegas and marries childhood friend Jason Alexander at the Little White Chapel. Fifty-five hours later, her people get the marriage annulled. Problem solved. 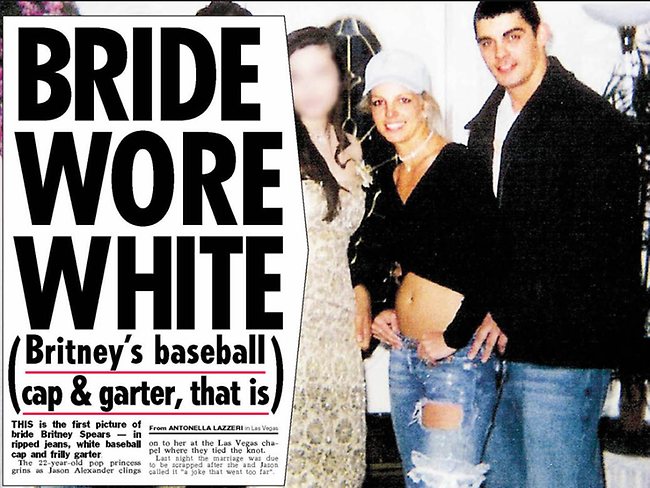 Britney marries frog No. 2, back-up dancer Kevin Federline. The couple has two kids, Sean Preston and Jayden James Federline, and stars in the reality show “Chaotic” (yeah…file that one in the “Do Not Open Folder” with Crossroads) before Spears files for divorce in November 2006. The divorce is finalized in July 2007. 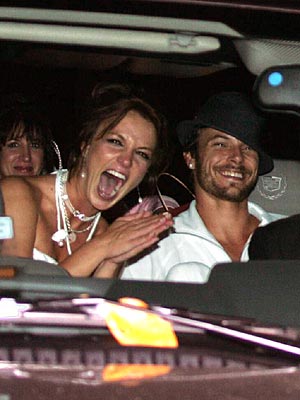 In February, Britney checks into rehab in Antigua for less than a day. The next day, she’s spotted shaving her head in Los Angeles, and spends the next several weeks in various rehab facilities. In October, Britney loses physical custody of her children. She also releases her fifth album, “Blackout,” and even though it was her first album not to debut at No. 1 (it landed at No. 2), its single “Gimme More” gives us the tagline to end all taglines: “It’s Britney, bitch.”
Britney is hospitalized at Cedars-Sinai Medical Center in Los Angeles and has visitation rights to her children suspended. She’s placed under temporary conservatorship of her father James Spears and attorney Andrew Wallet.
Britney drops her sixth studio album, “Circus.” It debuts at No. 1, making Britney the youngest female artist to have five albums debut in the top spot and earning her a place in Guinness Book of World Records. Its single “Womanizer” is Britney’s first No. 1 hit on the Billboard Hot 100 since “…Baby One More Time” came out 10 years earlier. Britney is back, bitches.
Three proves to be a lucky number for Brit Brit after all. Her song “3,” the only single off of her greatest hits album “The Singles Collections,” becomes her third No. 1 Billboard 100 single.
After a relatively quiet year for the pop princess and with her personal life back on track, Britney releases her seventh studio album, “Femme Fetale.” It peaks at No. 1, tying her with Mariah Carey and Janet Jackson for the third most number ones among women. Successful career comeback No. 2? Check.
If Britney giveth, then she shall receive: After years of delivering iconic performances at the VMAs, the award show honors Brit Brit with the MTV Video Vanguard Award, a lifetime achievement award. That same month, Britney announces her engagement to boyfriend and former agent Jason Trawick. The two never make it down the aisle, though, calling it quits in January 2013.
Britney is added to the judges’ table on “The X Factor,” becoming the highest-paid judge in the program’s history. During her one season with the show, she serves as a mentor for its teen category, obviously, because nobody knows more about teen stardom than Britney.
Forbes crowns Britney its queen once again, proclaiming her music’s highest-paid woman of 2012.
Britney releases her eighth studio album “Britney Jean” in late November, which debuts at No. 4 on the U.S. Billboard 200. With the album’s release, Brit Brit has finally completed her eight-record contract with Jive Records, now Sony/RCA Records. Hey record labels, want to produce the next Britney Spears album? Yeah, get in line.
Britney begins her two-year run as a Vegas girl. Her show “Britney: Piece of Me” is playing now until 2015 at the Planet Hollywood Resort & Casino in Las Vegas.
What’s next for Britney? Whatever the eff she wants. That’s one of the many perks of being pop culture’s queen. Thanks for the memories, Brit Brit. Here’s to the next 15 years of cultural dominance.