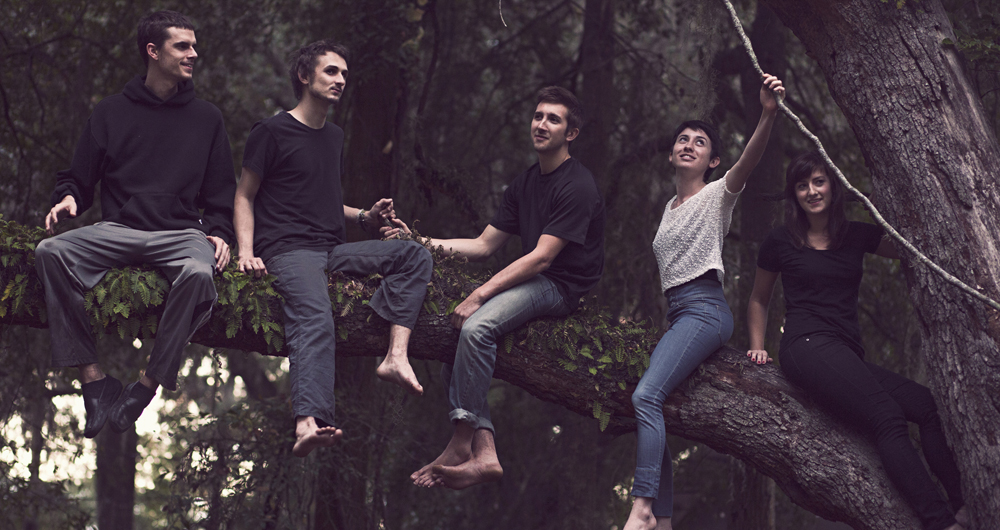 The Gainesville, Florida band Hundred Waters’ latest album, “The Moon Rang Like a Bell,” (which was released on May 27 via Skrillex’s OWSLA label) is an intimate, nocturnal album of atmospherics, whispering in your ear and quietly getting under your skin.  The production is immaculate and detailed, practically begging for repeat listens.  Frontwoman Nicole Miglis’s gorgeous voice, along with her vivid, dreamlike lyrics, fills out the band’s electronic yet earthy soundscapes, coiling around each other with the unity of two lovers.  The album has received critical acclaim, further marking Hundred Waters as an act to keep your eye on.

While they’ve toured in support of great artists like The xx and Julia Holter (as well as a part of Skrillex’s Full Flex Express Train Tour with Diplo and Grimes), the band is currently on a headlining tour in support of “The Moon Rang Like a Bell.”  Hundred Waters will be stopping off in Boston on Sunday, July 6, playing the Sinclair with Glass Animals, and you won’t want to miss it.

In honor of their upcoming show, I recently spoke with Hundred Waters’ multi-instrumentalist Trayer Tryon about a series of Norwegian autobiographies, boy bands, Sun Kil Moon, and more.

Q: What’s your least favorite album from your favorite artist?

A: “Least favorite album from my favorite artist?  Hmm.  I’m just thinking of what came out recently.  And I even liked this album quite a bit.  I hate to say it but the new Autechre album [“Exai”].  Their new album is very long and disorienting, but mostly everything just kind of blends together, and it doesn’t sound like there’s that many great ideas.  But then there’s like two or three songs in the middle that are just sublime, so I don’t dislike it that bad.”

A: “I’m not sure how much it influenced our music this last album, but I’ve been really liking [Karl Ove] Knausgård.  He’s amazing.  He’s a Norwegian author.  There’s like 3500 pages that he wrote in two years about his life, his self, and everything that kind of just goes unspoken in living.  And it’s called, very awkwardly, ‘My Struggle.’  It’s not like a Nazi thing at all, but that’s what it’s called.  And it’s just completely amazing because when we write music it’s very… I don’t wanna say painstaking, but there’s a lot of effort that goes into it and a lot of moving stuff around and changing and suffering over this and that.  But when he writes, he’s just like spilling it on the page.  And it’s a nice break from ourselves.”

Q: If you could collaborate with any artist, living or dead, who would it be?

A: “Well, let’s go with living.  I’ll just go with an example from life right now.  So we’re in the zone of trying to get people to work with our songs and remix them and cover them or whatever, and doing that by drawing up a list of all these people that we think we could possibly collaborate with and people that we want to collaborate with.  From that list, the names that come to mind are Tim Hecker, Mount Eerie (I love everything Phil Elverum does), Four Tet.  He’s probably not gonna do it, but…  There’s a lot of great stuff out there.”

Q: As a child, what did you want to be when you grew up?

A: “The first thing that I wanted to do was be a geologist because both my grandpas were hobby geologists, and they made me love rocks.  And then I wanted to be a hacker from like fourth, fifth, sixth, seventh grade.  For a while in there I was going to school to be an engineer.  I didn’t necessarily want to do that.  I just wanted to learn all the cool math and physics and chemistry and stuff, but I didn’t wanna sit in a freakin’ cubicle and punch numbers.”

Q: Do you have go-to guilty pleasure music?

A: “Way too much of it.  More of that than anything else.  I have every radio pop song you can imagine from the late 90s and early 2000s.  I was really big into all the boy bands and stuff, the radio rap stuff, and all the pop-punk stuff.  Pretty much all of the low-hanging fruit from that period.”

Q: What’s your favorite album of the year (so far)?

A: “I would say the Sun Kil Moon album [“Benji”].  For the same reason I was talking about the Knausgård book.  It’s just so freakin’ different from what we do.  It’s so relieving listening to it.  It gives off an air of effortlessness, as if he just dropped this amazing music out there.  That CD is unbelievable.”

A: “I really liked movies that were futuristic and depicted the future or were about computers and virtual reality and shit.  One of my favorite movies was ‘Hackers.’ ‘The Fifth Element.’ Pretty much anything that just showed the future.  I was really into it for some reason.  I don’t know why.”

Q: What’s the most obnoxious thing someone has ever done at one of your shows?

A: “I don’t think people typically get fucked up out of their minds at our shows.  I don’t think we attract the type of crowd that’s uncomfortably obnoxious.  I’m sure there’s something, I just can’t think of it.”

Q: Do you have a favorite film score/soundtrack?

A: “I don’t, but I know Paul [Giese, multi-instrumentalist] is really into the soundtrack from a movie called ‘Suspiria’ [by Goblin].  He loves that.  He’s always playing that.”

A: “We don’t really know EDM very well.  Before we met Skrillex, we hadn’t heard any of that stuff at all.  It was off our radar.  But we went with them because they were really cool.  We met them all, and they were just awesome people.  They seemed really into it.  We had just self-released our album [‘Hundred Waters’], so it was bizarre to us, meeting all these people.  His album’s really the only EDM album I know.  We could only listen to CDs in our car for a while, and the only two CDs we had were ‘N Sync’s self-titled and Skrillex’s new CD.  We got to know both of those CDs very well.”

“Sun Kil Moon’s kinda folk-ish, isn’t it?  But if this were Nicole answering, she would probably say the Joni Mitchell album, “Blue.”  Kind of obvious.  Wanna be cool and say something else, but that’s pretty fucking amazing.”

Enter to win tickets to see Trio Da Kali at The Villa Victoria Center of the Arts (Newton, MA) on April 10th. END_OF_DOCUMENT_TOKEN_TO_BE_REPLACED

END_OF_DOCUMENT_TOKEN_TO_BE_REPLACED

Enter to win tickets to Rhye at The Paradise on February 28th. END_OF_DOCUMENT_TOKEN_TO_BE_REPLACED

Her new album has been pushed back, but we have Kimbra’s new single for you. END_OF_DOCUMENT_TOKEN_TO_BE_REPLACED

The folk duo returns with a new record this week. END_OF_DOCUMENT_TOKEN_TO_BE_REPLACED

Now that we’re done looking back at 2017, let’s look ahead at 2018. END_OF_DOCUMENT_TOKEN_TO_BE_REPLACED

Our first Song of the Week for 2018. END_OF_DOCUMENT_TOKEN_TO_BE_REPLACED

In a year when so many things were off, the music was right on. END_OF_DOCUMENT_TOKEN_TO_BE_REPLACED